An urban road construction project is much needed to help with the flow of traffic, in the process widening an intersection. But that widening characteristic may impact a local business that's a mainstay in the local community and much-patronized by locals -- locals who also fret that a wider, faster road will make crossings much less safe for schoolchildren and others.

It sounds a lot like the battle over widening NC 55/Alston Avenue near Los Primos, the Latino-owned market that was until the opening of TROSA Grocery the only plausible foodstuffs outlet in a large swath of East Durham.

But this battle's gearing up in a different part of town: Fayetteville St., in the heart of an area dear to Durham's politically powerful black middle class.

And the business that may be impacted -- Dillard's -- is a Durham-wide treasure.

The City held a public informational meeting back in March to discuss the proposed improvements to the area where Fayetteville St. meets Buxton Dr. and Riddle Rd.; the latter two roads each meet with Fayetteville less than 100' apart, and there's a move afoot to rejigger it all to fit a standard four-way intersection.

But that move would bring the intersection and Fayetteville St. right up to the edge of Dillard's, taking up some of its property. 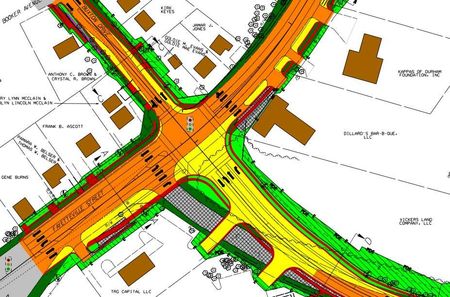 It's an eerie parallel to the Alston Ave. situation a few years back, though in that case the Los Primos market itself was likely doomed to closure entirely -- which, along with the pedestrian-unfriendliness perceived in the initial design, led to quite a few machinations for change.

One City proposal to swap city/state projects and project dollars between the Alston corridor and a Woodcroft-area widening of Fayetteville St. led to a wall of resistance on Council, where Mayor Bell fretted over the impressions that residents might have over moving City dollars from North-East Central Durham down to prosperous South Durham -- even though the net result of widenings was thought, at the time, to be the same no matter who funded what and where.

Eventually, the taking of Los Primos was acknowledged as an environmental justice issue by state transportation planners, though the realignment eastward created its own problem, as at last report some land that the Durham Rescue Mission had planned to use for expansion sat in the way instead.

Still, throughout the debate over Alston Ave., there seemed to be an uncomfortable shifting-in-chairs at the City level when questions of the impact of this grocer came up.

You'd hear mutterings that it wasn't really a terrific grocery store and wouldn't be that big a loss. The takeaway I kept hearing: not such a loss if Los Primos isn't there.

And any delay in widening the road was seen as holding back East Durham, and as a slight against the largely African-American community there even as they saw road improvements taking place throughout the rest of the City.

(Gary Kueber, by the way, had the best explication on why road widening and economic investment aren't linked over at Endangered Durham.)

As I said, the parallels to Los Primos couldn't be more similar.

But in this case, Dillard's isn't a little-known Durham business -- and it doesn't have a Latino-sounding name. Instead, it's one of the best-loved restaurants in Durham, and (no small thing) one of the most revered African-American owned businesses in town.

The N&O's Jim Wise noted that local residents (including Joe Bowser campaign treasurer Thelma White) showed up at a County Commissioners meeting this week to criticize the proposed widening and the impact it could have on Dillard's.

Clearly, this is a road project whose impact on a local businesses and pedestrians is quite obvious to local advocates -- something that was well nigh missing from the debate over Alston Ave. a couple of years back.

Interestingly, White drew an analogy not between Dillard's and the Latino-owned Los Primos, but between the African-American 'cue shop and Durham institution Bullock's, which was in the headlines for a different set of reasons this spring:

Dillard's is the second institution of Durham barbecue to face a threat this spring. A few weeks ago, a salmonella scare cost Bullock's Barbecue an 80 percent drop in business. A group of Durham chefs organized a well-publicized campaign to assure the public that Bullock's food is safe.

Thelma White, who also lives nearby, said she wants to see a similar demonstration for Dillard's, which has been in business for more than 50 years. When she asked audience members to stand in support of the restaurant, everyone in the chamber rose up including the county commissioners.

We here at BCR haven't been following the issue on Fayetteville St. closely, so I'm not prepared to talk about the specific impact on Dillard's from the proposed project.

But certainly, categorically, the kind of issues White and others are talking about here -- road design, the impact of road width, pedestrian perspectives on safety and crossings, and takings of private businesses -- matter.

They matter a lot, and folks are doing the right thing standing up for these issues, and for a business that means a lot to so many of us in this town.

And these issues matter as much on Fayetteville St. as they do on Alston Ave.

I'd like to think that the NC 55 project led to a re-awakening of consciousness about road design and traffic in the Bull City... though given that City vehicles were recently clocked going well over the speed limit on E. Trinity, I'm not sure the message has permeated through every nook and cranny.

But I can't say I'm convinced that everyone went and picked up a copy of Tom Vanderbilt's book Traffic or has become followers of the Complete Streets movement since the debate a couple of years ago.

Sad to say, some things matter to you only when they hit close to home.

Dillard's is a treasure, and should be protected.

I just hope the folks standing up for Dillard's don't stay seated -- or worse -- the next time a Los Primos comes along.

Thanks for the link to my blog article about speeding city trucks. This has been going on for the five years we have lived here, and regularl complaints to various city department heads has done absolutely nothing. Similarly, my idea presented to Coffee with Council to implement a "How's My Driving?" program for the city fleet has disappeared down the memory hole.

The battle begins anew, this time with video cameras and radar guns to provide solid, and hopefully embarrassing, proof that Durham has a problem on it hands.

City employees are putting the city at risk of being sued for millions of dollars should one of these reckless drivers hit and injure, or worse yet kill, another driver, pedestrian, or cyclist.
All I want to know is: Where are our leaders?

The Riddle/Fayetteville/Cornwallis/Buxton intersection is a disaster and it needs a realignment in some shape or form. Whether it's this concept, or another, it's time is long past. I don't want to see Dillard's negatively impacted at all, but something has to be done here. Maybe Buxton could be moved south to the current Riddle terminus? Drive or bike through here at 8:45am or 5:15pm any weekday to see why this project, in some form, is needed.

I've been following this widening for several months for other reasons, but I don't understand what the "pressure" or "impact" is.

If well-designed, I would think shifting Riddle to the north could very well help Dillards. The key is ensuring that there is a left-in opportunity for southbound Fayetteville Road traffic.

To paraphrase Crash Davis, I believe in the soul, the small of a woman's back, that Lee Harvey Oswald acted alone, and that most roads are plenty wide already. I believe there ought to be a constitutional amendment outlawing Astroturf, the designated hitter and so-called barbecue joints that cook with gas/electricity. And I believe that too-wide roads running through formerly-great-but-now-entirely-ordinary barbecue joints that long ago stopped cooking over wood coals are just plain sad.

How about the Miami Blvd, Holloway and Gary Street Intersection. This area need some crosswalks and sidewalks even perhaps renovating The Village add some more retail stores. I see pedestrians be having a hard time getting across this five way Intersection which Is not mark down with crosswalks.

It would be helpful to see a study of the vehicle vs pedestrian/cyclist threat that CURRENTLY exists at Fayetteville/Riddle and what it's projected to be if this mammoth intersection is adopted.
Right now, I know for a fact that I for one slow down when approaching this site because it's necessary to pay attention there in order to navigate it adequately.
Build some six-lane monstrosity with no adequate access points or crosswalks and watch what happens to area businesses like Dillards. Fayetteville will become a 60MPH zone through there.

Not directly related, but:
can Dillard's and similar businesses open "back entrances" onto the American Tobacco Trail?
People-powered transportation can make one hungry...

Doug Roach is probably right; this sounds possibly disastrous. The current intersections are weird and awkward, but to some degree they're weird and awkward in a way that encourages drivers to sit up & take note rather than just whizzing on through.