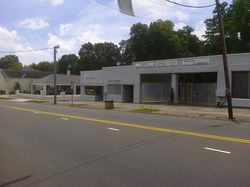 One Durham institution is musing over plans to get a little bigger. And in the process, one of Durham's best-known neighborhood-scale commercial districts could be getting a little smaller from a storefront perspective.

Of course, it's not exactly active storefront retail these days, with long-time tenants Altered Image Hair Designers having decamped for downtown a while back, and with the one-time home of what became The Green Room having largely been emptied of life for some years.

Last year Gary Kueber mused that the site was likely to dry up into more parking for the Clements Funeral Home just to its south, given that Clements owned the site:

[I]t's incredible how moribund these storefronts are compared to the vibrant uses across the street. I don't think I'm assuming too much to think that Clements is only into this for the land/potential parking - and isn't exactly motivated to invest money to improve the appearance of these storefronts or attract interesting tenants. I'm beginning to think that there is some rule in effect in Durham - no active storefront can exist directly across the street from another active storefront. Except at Main 'Street' at Southpoint, of course.

I mentioned the waste of surface parking endemic to funeral homes and churches yesterday, and how damaging this was to the urban environment. We generally struggle with our addiction to immediately available and proximate parking in the urban environment as it is, but these high volume, low-duration uses are particularly problematic.

According to a May email from the Watts-Hillandale Neighborhood Association board to residents, the owners of Clements are proposing to demolish the gray shopping strip and to reuse its foundation and footprint to build a new structure containing offices and a "community room," presumably for visitations, services and the like.

It would mark a certain muting of the Broad Street retail corridor, which along with Ninth St., downtown, Rockwood (kinda) and, yes, Southpoint's outdoor center, is one of the few vibrant pedestrian-scale shopping areas in the Bull City.

(Of course, there are other such in-town centers or potential centers that aren't vibrant -- Fayetteville St., Angier/Driver, Old Five Points and the Chapel Hill St. corridor in SWCD all come to mind, and all are in need of revitalization and investment.)

Across Broad St., Watts Grocery, Broad St. Cafe and High Strung anchor one portion of a walkable district, with the Green Room, Joe Van Gogh's, a framery/art gallery, and The Palace just to the south, along with a florist.

And between W-H and Walltown, not to mention Science & Math next door, there's plenty of potential pedestrian retail traffic.

Of course, Broad Street is so -- ahem -- "broad" that it is difficult for pedestrians to cross mid-block easily, making the possibility of a real double-barreled retail corridor kind of unlikely, we suppose.

And it's not like Clements isn't itself a long-time fixture on the street, or that expansion isn't a given. Nice steady growth and dependable customer base those funeral homes have, something that strikes me more acutely as my mid-thirties near than it did a decade past.

Still, it's too bad to lose walkable retail storefronts in one of the only places where we are likely to actually need and use them.

Not that it's a foregone conclusion that Clements can use it (a variance will be required, support for which the W-H'ers are still contemplating), but it doesn't seem likely to lose, exactly.

I find this very disappointing, although an actual building would be better than another surface parking lot.

Also, I was under the impression that anything south of Club Blvd. is the Old West Durham neighborhood? Is it Englewood?

Mid thirties? Why, you are but a young pup! It seems like it's the 40's when the mind starts going and you start falling apart (that's been my experience). But with three out of four grandparents living into their mid to late nineties, I'll be around for a long while still.

Agreed this is disappointing. I looked at investment properties on Broad and Iredell a while back, but the big footprint of Clements means it could just as easily become a small neighborhood market, medical/professional practice, or a midsize retail establishment in 20 years or whenever Clements decides to move on. In the meantime, a steady stream of clients from OND / Walltown / TP ensures they ain't going nowhere, and their sure-to-be-conventional architecture means it will never get reused as funkily as BSC and the like across the street. I predict minimal opposition from WHH and OWD.

Kinda related: the teardowns on Ninth and Broad as you get closer to the old Biscuit King. A long time coming (I lived in the one next to Magnolia as an undergrad and paid $500/mo), but equally sad. The times, they are a changin'.

This is not a disappointment. The neighborhood is seeing the expansion of a long time local business. The site isn't going to be another parking lot, thank goodness! The area isn't exactly a bustling retail district and most retail stores would find it hard pressed to maintain a thriving business in that location. The dining options across the street adequately fill most neighbors needs when it comes to food and beverage, so there really isn't room for another place to eat. Converting the space into retail storefronts is unrealistic. It's great that Clements isn't going to let the fronts sit vacant.

I would make the argument that Clements HAS let the fronts sit vacant. It is equally hard for a retail business to thrive, much less take off, without long term location security.

OWD is south of englewood.

So the block that clements is in is in WHH.

@KML: "The area isn't exactly a bustling retail district and most retail stores would find it hard pressed to maintain a thriving business in that location. The dining options across the street adequately fill most neighbors needs when it comes to food and beverage, so there really isn't room for another place to eat."

Huh? This isn't downtown Rocky Mount...have you not noticed the hundreds of homes within walking distance of this block? (Surely you're affiliated with the funeral home?)

And Kevin, while I normally agree with you, I have to take exception to your assertion that Broad St. is too wide to have truly double-loaded retail. I cross that street on foot all the time, and have never really regarded the street's width as a noticible barrier. (Sometimes I even cross in the middle of the block! Shhh!)

This is a loss for the surrounding neighborhoods, no doubt.

@KML,
I respectfully disagree. This IS a bustling retail district. High Strung, a retail store, seems to be thriving right across the street. Watts Gro and BSC pull from a much larger area than the immediate neighborhood, so its irrelevant whether neighbors' needs are filled are not. And there is no need to CONVERT the empty space to retail storefront, because it is ALREADY retail storefront. I'd hate to see a use that is going to be dark much of the time.

Does anyone know when the variance hearing will be? I assume that it will be at a Board of Adjustment meeting.

Its a SHAME that you folks in the Watts area are opposed to this expansion. Its funny how Clements has been in business for over 50 years on Broad st. I have seen business's in the area open and close and end up leaving the area worse than before. To think that they want to tear down a DUMP to build a better building, and you folks are against that. Maybe they should leave it vacant and let the homeless move into your area. I bet then you would beg for them to do something about it. Just think of what it would look like then.