There's an eerie parallelism to two recent disputes between popular local businesses and the City.

Both involve local eateries that weren't informed of, or didn't undertand, the implications of road and streetscape projects.

In both cases, City officials have come in to resolve questions and smooth over relations, but only after the matters have gotten in the papers or have, in the case of Parker & Otis, actually gone to construction.

For Dillard's BBQ, a longtime Fayetteville St. institution and one of the most beloved African-American-owned businesses in the Bull City, the word from City staff is that meetings with the restaurant owner have clarified the actual impact of a road realignment and solved an ADA issue.

For Parker & Otis, the complaints poured in when contractors showed up last Friday, cordoned off the on-street parking zone along Duke St., and removed it in favor of a turn lane -- to accommodate on-street parking for West Village's use, even as the Chesterfield factory that it would presumably serve best sits vacant.

In the case of Dillard's BBQ, City transportation director Mark Ahrendsen told BCR last week that the project appears on track to meet the concerns of the business' eponymous owner.

As we noted here on June 10, a County Commission meeting saw residents raise concerns and outrage over the proposed realignment of Riddle Rd. and Buxton Dr. at Fayetteville St. Currently, the first two roads meet Fayetteville at slightly-askew points, so the City's proposed a realignment to create a more typical perpendicular intersection.

To do so, the City will curve Riddle Rd. northward, with the gray segment on the map below showing today's roadway that would be abandoned, and the yellow segment denoting new roadway.

Ahrendsen stressed that "the biggest impact in terms of property acquisition" will be borne by the Vickers Land Company, LLC, on what's today undeveloped land.

Dillard's, Ahrendsen noted, would have a number of construction easements on it to facilitate the work being done, but the taking would not impact the building or its parking area in any way.

Only one corner of the Dillard's property will actually be taken for the project, Ahrendsen noted.

"The plan is that that asphalt would be removed, the curb would be set back, a sidewalk would be provided around here, [but we would] still maintain the primary driveway," Ahrendsen said. A grassy strip will replace the asphalt removed, shown in gray checkered marks below. 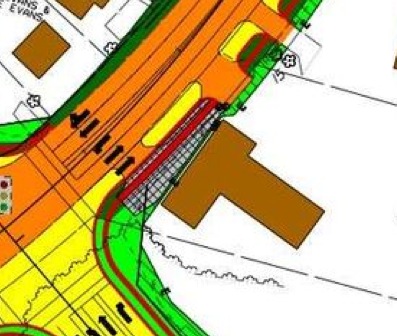 One outstanding concern had been that Dillard's ADA-accessible, step-free entrance is along that southwest corner of the building, nearest the impacted driveway and asphalt area. Ahrendsen said the City's ADA coordinator is working with the business to find a way to connect the ADA-accessible entrance to the new sidewalk, allowing patrons in wheelchairs and other mobility devices to use the sidewalk for ingress/egress.

He noted City staff had sat down to meet with business owner Wilma Dillard after the matter had hit the papers to explain the full impact of the project and address any concerns.

"She had a better understanding of what's the actual impact of the project on her operation" after that meeting, Ahrendsen told BCR.

He also noted that Dillard's customers approaching southbound on Fayetteville St. will now have a left-turn lane to queue in in order to access the business, something that doesn't exist today.

Ironically, not 48 hours after BCR met with Ahrendsen to talk about the Dillard's project, another roadwork effort cropped up headaches for City staff.

Yours truly was grabbing coffee at Parker & Otis at the corner of Peabody and Duke on Friday morning when business owner Jennings Brody asked if we had any idea why the on-street parking spaces along Duke St. had been cordoned off that morning.

That stretch of Duke has been impacted by construction related to the Liggett/West Village streetscape work, which closed Main St. between Duke and the downtown loop for a year and which has been in the wrap-up phases with streetscape and signal work along the Duke St. side in recent weeks.

No clue, we said. Give me a call if anything strange happens.

Sure enough, the phone rings a few hours later.

The City, Jennings said, had roped off the on-street parking spaces because they were removing them at NCDOT's behest.

The new on-street parking spaces adjacent to West Village essentially end up taking up one of the four lanes of traffic on northbound Duke St., the right turn lane to access Morgan.

But with the lane changes associated with the work, the state transportation folks insisted that the brief left-turn lane for northbound Duke St. traffic to turn onto Main St. be widened all the way back to Peabody, with what City public works director Katie Kalb told BCR was part of a need to maintain three lanes' width of roadway at that segment of Duke St.

Here's what the road looked like before -- note the car parked in front of P&O in this Google Street View photo, though usually there's a long stream of vehicles -- and after the change last week. 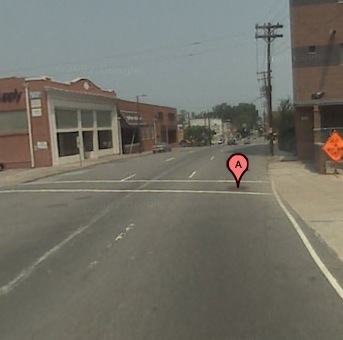 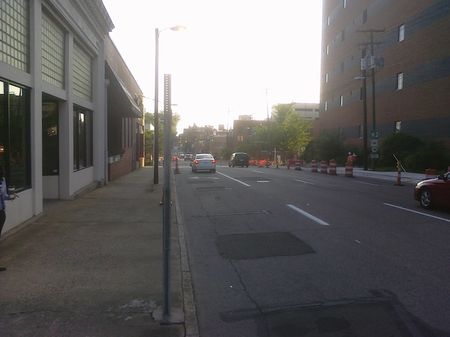 And in one of those odd parallels, that also is the ADA-accessible entrance for P&O; a handicapped-accessible space is marked as one of the spaces off Duke St.

Well, was marked. That's a travel and turn lane now.

Ed Venable, manager of Durham's engineering and stormwater functions, noted in an email that the City had hoped to maintain the status quo for Duke's western side.

"We attempted to drop two traffic lanes in favor of parking on both sides of Duke Street," Venable said in an email. "NCDOT required a turn lane on the side of the street where this business is located and eliminated the parking on that side."

He holds out some hope for a reconsideration by the state traffic deans -- who, in an East End Connector-less world, certainly know that intersection, since they have to drive through it to get from NC147 northbound to their Duke St. & Stadium Dr. District 5 offices.

"We are going to go back to NCDOT and argue again for the parking spaces," Venable told BCR.

But that still leaves unanswered another question: what communications happened to alert the business to the planned removal of the spaces?

A search of the City's web site found that the public hearings on the streetscape project happened in 2005/2006, in the days when Fowler's was located in the space, before Brody opened her specialty food and coffee shop.

Yet according to Brody, her landlord, Richard Morgan (of Morgan Imports fame) also seemed surprised by the removal of the on-street spaces.

And more to this observer's point, it seems like there should have been communication at least when the construction phase was going on. If the first outreach that business owners and landlords had of the removal of parking spaces was the arrival of contractors with caution tape and orange barrels, that seems like an opportunity for improvement.

Venable notes that he met with the owners of Parker & Otis on Monday morning this week, three days after the parking space removal. "They seem satisfied with our plan to move forward to secure more parking," he tells BCR.

But it's hard to imagine the satisfaction wouldn't be better if more communications happened in advance.

(We asked Venable on Monday to clarify what communication or outreach to business and building owners took place during the public hearing and construction/preconstruction phase; no word back yet, but we'll update this post with anything new that's learned.)

Any idea how the "need" for the left-turn lane to extend the entire block is defined? Trumping the "need" for on-street parking spaces in this dense area and for traffic calming on this one-way street doesn't sound like a positive trade at all.

It's NCDOT. Don't try to reason with them on this stuff.

Best to just get the EEC built and take the streets back for the city.

will someone on the city staff grow a pair when it comes to dealing with the DOT?

The talk of downtown revitalization is a lot of hot air if this is what they are going to do.

there should be parking on both sides of Duke Street, pre and post EEC.

There really is not that much traffic on Duke Street, the only time there are backups is when the train rolls through.

Vehicles turning left onto Main might have to wait for a pedestrian or two, but I can't imagine how DOT could justify a dedicated left turn lane several hundred feet long when there's no oncoming traffic - especially at the expense of much needed parking in such a dense urban setting.

This is just another example of outdated NCDOT design criteria like those that gave us several miles of unneeded shared left turns lanes (and hundreds of acres of impervious surface) on Duke and Guess north of I-85.

So thats why people were honking at me on Monday morning. I stop there every morning for coffee. Being a creature of habit I thought nothing of it.

I'm also convinced that work along Duke and Morgan will never end. Those guys seem to jackhammer the same section of side walk each Monday and have it fixed by Friday.

There are plenty of intersections in town that need more capacity, but this isn't one of them.

A woman in Beijing who rolled out her own parking space: http://motoring.asiaone.com/Motoring/Drivers/Story/A1Story20100620-223061.html