Bull City Rising
About Archives @bullcity
BCR's Daily Fishwrap Report for May 6, 2010
"The Bull-et List" -- what would you do if you had one year in Durham? 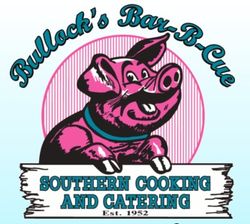 The N&O's Jim Wise has a nice pick-up on a story that'll resonate with Durham barbecue lovers everywhere.

Business is down 80% or so at Bullock's, the original west Durham 'cue shack, about to celebrate six decades of pickin' pork -- but which has been picked at less in recent weeks since the Durham Co. Health Department put out an advisory that there were several cases of reported salmonella infection after a catered lunch that used take-out from the restaurant.

But as the H-S noted recently, the restaurant says the food may have been consumed as much as a day after it was offered up, something the family owners say they have no control over once the food ships out the door.

And, as Wise points out, the owners note they've never had a health inspection score below an "A."

So what to do to get customer confidence back -- and customers back?

Well, Sam Poley, formerly of the restaurant Starlu and now in charge of marketing for the DCVB, has a terrific idea. (Which he often does; Poley was one of the key movers behind the effort to sell the Bull City to Google, and was a key organizer of the DBAP photo shoot.)

Poley's plan? Get chefs and other quotable notables to turn out tomorrow for lunch at the Quebec St. barbecue restaurant.

The N&O points out that no other restaurant has ever operated in Durham as long as Bullock's has, with their nearly 59 years. And if Poley and the others who turn out tomorrow have their way, that's a record that won't screech to a halt any time soon.

I have a better idea - how about they actually start cooking their own barbecue again? The general public is grows more food-centric and savvy every day, and the best way to get butts in seats at a restaurant in Durham is to serve delicious food prepared in-house using local ingredients.

My family eats at Bullock's regularly, and has been there since this scare broke. Not one time in almost 30 years have any of us gotten sick. Thousands of people eat there every week and come away happy - this is an isolated incident.

If BBQ isn't your thing, that's OK. There are more than 100 entrees on the menu that are not BBQ, including some excellent seafood.

I am not sure what "bart" is talking about - the food is cooked and prepped right there on site. This is a local business that takes care of its employeees and deserves community support.

credit card maybe but they definitely make their own barbecue so the comment above is mistaken. Analysis is looking into a possible problem with a supplier of one of the ingredients.

Our family ate at Bullocks for the first time in recent years a couple of weeks before the salmonella thing. Obviously, that's an isolated case, and we were all fine. However, that visit did leave us utterly underwhelmed and feeling that Bullocks is coasting on its old reputation to a substantial degree at a time during which the market for great Carolina BBQ in Durham has gotten much more competitive. The pulled pork meat was almost pureed. The sides were obviously warmed-up canned goods. Also, why not be customer friendly and accept credit cards like every other restaurant on the planet?

In our opinion, Dillard's on Fayetteville Street (and at the DAP) serves up the best pulled pork in Durham, followed very closely by Backyard BBQ (have eaten at Pit #2 on Guess Road many times but can't vouch for other location), whose mac-n-cheese and collards are outrageously great. Hog Heaven's not bad, either, and if you want to go Texas style, Q Shack is good -- with their beef brisket and sides a particular high point.

So, just sayin'. Maybe some Bullocks customers were just hanging on by a thread, and this little incident was the push that drove them elsewhere. I have nothing but a culinary interest in any of these establishments, and I would love to see Bullock's overcome this crisis, spruce up their offering and be around another 60 years.

But as long as he's listing his favs, let me add a vote for Allen & Sons over on Old 86. Between that joint and Dillards (and their incredibly sublime carrot soufflé) we figger we're literally in "Hog Heaven".

I haven't been to Backyard's Guess Rd location but I am all about the NC 55 home (just south of 54 on the east side--keep your eyes peeled for the driveway or you'll miss it!). Still: Dillard's FTW!

Bullock's was fine the last time I visited, but I wouldn't mind if they take this chance to step up their game.

Yes Bullocks is an institution and there is something to be said for that. But I agree with Porkhead in that they are coasting on their reputation. The BBQ is almost pureed. Durham has gotten much more competitive BBQ in the last decade and Bullocks needs to keep up or lose customers.

I admire them standing by their no credit cards policy, but I can guarantee you it costs them business on a regular basis.

The restaurant business is a competitive one where many fail. Just because you've been a famous BBQ place for years does not guarantee you will always be one. The customers are the most important thing right now, so I'm glad to see other chefs banding together to help bring them back.

I went -- it was fabulously packed. WTVD covered it and it will be on the news this evening. I spotted Jim Wise, Mike Woodward, Tom Ferguson, the entire staff of the Q Shack (who I heard were closed today and had a sign out front steering customers to Bullock's), and Scott Howell. Those were just the folks I recognized. Tommy came out and gave a speech and got a standing ovation.

I had the BBQ and fried chicken (dark) combo with a side of greens and it was excellent. The BBQ was not "pureed", it was a great deal -- a ton of food, great value. The chicken was fresh out of the fryer. I haven't eaten there in some time and was impressed -- it compared favorably to Dillard's, Backyard, and Q Shack where I happen to go more often, and I am not a big Allen and Son's fan; I think this was better.

The fact that y'all put Bullocks in the same sentences with the other excellent Q places round here tells me you are all suffering from a ton of nostalgia bias. As a recent transplant to the area I thought their food was barely edible. Mediocre up and down the line. If there is no smoke to be seen coming from your restaurant you are NOT making barbecue. The warmed up sludge I had at Bullocks was something like the pork at Chipolte but without any of the flavor.

My personal local favorite is Smokey's shack down in Morrisville. Now that is some serious Q.

As far as I know from my extensive and greasy research, the Allen & Son in Chapel Hill (but not the unrelated one in Pittsboro), the Backyard BBQ Pit in Durham, and The Pit in Raleigh are the only restaurants in the Triangle that cook over wood coals, which is the distinguishing feature of barbecue. That said, I have a soft spot in my heart (or perhaps that's just a blocked artery) for Bullock's, though it is more for the atmosphere than the food.

I ate there today and lived to tell about it. Glad to see they're back in business.

Porky LeSwine is absolutely right: Wood- or even Kingsford-cooked meat is an endangered species, and gassers like Bullock's are part of the problem. I go there because it's an institution and a decent meat-and-three, but it hasn't been a barbecue place for a long time. Get the chicken.