New York has Times Square and Broadway in the warm months. Boston has Memorial Drive every Sunday. 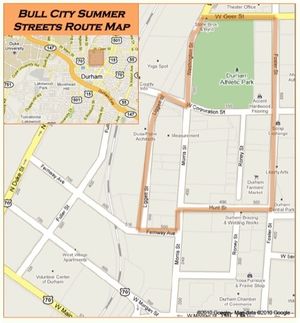 Yes, these two fine cities have their own well-known car-free zones, places where bikes, pedestrians, skaters and the like can get out and roam free on the asphalt, either full-time or part-time.

And now, we Durhamites -- fresh from our dizzyingly cosmopolitan mentions in the New York Times (mentions, I tell you; twice in one week!) -- are getting ready to experiment with the idea of making some of our roads car-free.

This being the Sunbelt, though, where there's a Chevy Suburban in every distal neighborhood and where a few edge-case folks have (yes, I've heard this) been known to drive their car from the ATC South Deck for dinner to the ATC East Deck for a DPAC show, it's not for a summer... or a day a weekend... or a whole day.

But, hey, that's no reason not to get out and enjoy it. Every journey begins with one short step.

And so too will the newly-christened Bull City Summer Streets.

Set for Sunday, May 23, organizers including Clean Energy Durham, Triangle Transit, and Durham CAN among others have finagled the closure of a 1-mile path encompassing Durham Central Park and the historic Durham Athletic Park, from 2-6pm.

During that period, the roads in question will be open only to non-motorized traffic, the kind of folks who are typically worry-free only on those stretches of greenways that meander through the Bull City.

(Even that comes with exceptions. True story: my first time on a particular stretch of the American Tobacco Trail a few years back, I was surprised to hear the roar of a motorcycle behind me, though I guess it was more of a purr, given that the shiny metal bike was traveling at only perhaps 10 miles per hour.

I would have said something to the trail interloper -- but it's not every day you see a dude wearing a custom t-shirt featuring their own WANTED poster/arrest warrant. Seriously. Discretion, valor and all that.)

Anyway, assuming it's a good-weather weekend, it should be a grand time to enjoy the camaraderie of the great outdoors from a vantage point not seen every day: that of the centerline, without a few thousand pounds of steel surrounding you.

Ah, if only we could try this one out on Erwin Road.

Find out more via the Bull City Summer Streets Facebook page or Twitter feed, or via their web site.

We're all really excited to do this! It's actually SUNDAY May 23rd, though.

Thanks for setting it up, cuz!

I hope people will be creative in how they use the space - events like this remind you of how much physical space is dedicated to the motor vehicle in our cities. It'll be fun to use that space for other purposes, even if only for an afternoon.

Yeah, definitely! We're planning some fun programming - there will be drum circles, Pilates demonstrations, yoga classes, dance lessons, live music, and more - and there will still be plenty of space to use creatively.

Hopefully this won't be the only time; we'd love to see it happen a few times year in Durham.

I'm going to make the trip over from Raleigh to check out this cool Durham event. AWESOME!