In Durham, granite curbstones to go on sale soon (even if surplus vehicles are priceless) 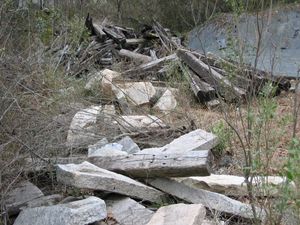 It was almost a year ago today that BCR tooted out to East Durham's Albright neighborhood with City Council's Eugene Brown to see the City's Public Works dumping site, the target of PAC1 complaints that the refuse site was unsightly and kicked up dust near a playground and community garden.

And what did we spy (besides the oh-so-ironical "No Dumping" sign across from what residents kvetched was a City dump of its own) but a stockpile of granite curbstones, taken out of older neighborhoods during curb and gutter repairs.

As we noted then:

These big blocks in the foreground? They're cut granite, and they've got some significant value to them in the hands of someone who could use them. (A number of older in-town Durham neighborhoods have granite curbs, in fact.) Brown suggested that a number of landscaping companies would be happy to pick these up gratis and re-use them.

Well, it's a lean budget year. And it doesn't make much sense for the City to hold on to precious granite curbstones that have value, wherever they're being held these days (we don't know for sure that they're in Albright any more.)

To wit, a Public Works employee told a local citizen the other day that the City will still be sold off to residents interested in using them in landscaping or other projects.

I guess a granite curbs have more value than a used police cruiser.

According to a post on the Old West Durham listserv by Emmet Ellis-Furlong, our beloved Bull City "has recognized the value of these granite curbstones and has decided to sell them rather than dump them or give them away (better use of our tax dollars)," according to the author's conversation with Public Works' Dennis Doty.

A process is currently being established for residents to buy the excess granite curbs back from the City, with Durham officials being about a month away from having the process in place. Interested Durhamites are encouraged to call Neill Allen in the City next month at 560-4326 x30283 to figure out how to buy 'em.

It won't be the first time that such curbs have found their way to market; in our post here last year, a reliable Durham insider who comments under the nom de plume "Bullicious" noted that contractors got into the act when Oval Park got renovated in Watts-Hillandale.

"When the city put in the median at Oval Park on Club Blvd., the contractor starting selling off the curbs," Bullicious said. "A bunch of them were hauled off by neighbors before someone got on the city about reusing them. At that point they hauled them off, clearly as an act of appeasement."

Well, it's certainly nice to see that the City is making sure the curbs find better homes than some City storage lot.

And it's not a bad idea to sell them, either. The City sells surplus property all the time. And since the developers who initially built the streets in places like Trinity Park and other granite curbed Durham 'hoods deeded the street maintenance to the City -- yes, those were developed subdivisions, they didn't just sprout from the forest to suck down stormwater and nutrients by the hand of God -- there's no doubt the curbs belong to the municipality.

It's a good move, in lots of ways.

Yet there is a certain irony to see these hitting the market not 60 days after the dust-up over more than $25,000 in surplus trucks and police vehicles being given off to the struggling eastern NC town of Princeville.

From the sounds of things, City Hall is gearing up what we'll call "Katie Kalb's Curb-tacular Closeout," a fiscally prudent move.

But it would be far less noteworthy if the move didn't come weeks after "'Wild' Bill Bell's Sedan Superstore" -- you know, the one that offered a 100% discount to qualifying mayors.

Years ago the City used to stockpile old granite curbing at their yard at Alston and Gilbert. They no longer do this. These curbstones need to remain in Durham and under City control if only for this reason... when old driveway cuts are removed as properites are being redevloped in areas where there are existing granite curbs, it would be nice to "patch back" these gaps with granite, rather than concrete. Let's ask the City to hang on to these curbs.

I agree, we should be selling this stuff off or re-using it as quickly as possible. It should have been sold off or reused years ago, along with all the surplus City real estate and equipment. Funny how falling revenues suddenly motivat people. Sales from this could have funded some of the road construction we had to floats bonds for, saving us money twice - once on the purchase, and again on the interest. I guess that was more complicated than dumping the stuff, though.

Dan took the words out of my typing fingers.

Some of these should be earmarked, post haste, for re-use at the portions of the water main replacement project that is about to commence in Old West Durham, my neighborhood. From what I undertand, the City originally planned on tearing out the granite curbs along the route of the water main replacement (replacing them with concrete curbs), but has since amended that scope of work to only replacing the curbs where they need to be disturbed. There may be a good technical reason to replace the disturbed granite curbs with concrete, but if we have surplus granite on hand it would much, much nicer to replace them in-kind, with granite.

I am sure the Old West Durham project will not be the last of it's kind. Once things like granite curbs go away, they are gone forever, and that portion of the historic fabric that makes our neighborhoods so interesting goes with it. Hang on to the curbs.

My preference is that the city stop removing granite curbing unless it is absolutely necessary. We just had a fire hydrant repaired (knocked over by one of Durham idiot drivers - a hit and run) and they pull a long section of granite curbing and replaced it with a rounded concrete curb which, well, looks like hell. This was necessary since I believe that the granite curb was not damaged, but just needed to be removed in order to effect the repair. It should have been replaced.

Erm... I should have proof read before posting. I meant it to read "This was not necessary..."

Next time you drive down West Chapel Hill street (Ingold Tire, Absolute Auto, Immculata Catholic Church, etc.) take a look at the re-purposed granite curbs that are edging plant beds and used as steps in front of those businesses.

A buddy of mine, Scott Nielson, had the contract to redesign the area as part of a municipal facelift and I showed him what I had been doing in gardens with curbstones I'd been salvaging from the city rubble landfill. (yes, contractors had been throwing these things away for decades). He got a bunch from the city, came up with a design and the folks from Redmill Landscaping installed them.

Hopefully we'll see this kind of creative re-use, rather than the lame stacked and mortared walls that the city has employed on a few sites (parking lot across from city hall, retaining wall north of DBAP). As a stonemason those two installations are visually and culturally offensive. So take a drive down W. Chapel Hill St. and see what those hand shaped granite curbstones could be doing for us.

I couldn't agree with you more. I had a new concrete apron installed at the base of my driveway a few years ago, by the City, due to storm water issues. Existing curved granite curbstone was temporarily removed so the concrete could be put in place. It was obvious that the City's SOP was to replace the granite with concrete. I had to remind them time and again during the process to put the perfectly serviceable curved granite back. They did, but I'm confident it would not have been if I hadn't been persistent. Oh yeah, let us not forget about how W. Trinity Ave looks after the water/sewer upgrades from a few years ago. The concrete curbing there now, doesn't look nearly as charming, and substantial as the granite there before. Where did that all go? Was it worn out? I kind of doubt it.

On a related note, much of the granite curbing along our streets is being slowly buried by the rising tide of asphalt. In some places, the road has risen, likely over decades, to the same level as the granite curb. Not only is this ugly, it also reduces the barrier to drivers parking on sidewalks, or driving over sidewalks to park in front yards.

I hope that the next time that the city needs to re-pave these affected streets that they will take this into consideration and first grind down the street to give us back some effective, and visually appealing curbing before laying down yet another thick layer of asphalt.

Does the city still have ant curb stones I need a couple.