More good news from the corner of Foster and Geer downtown. 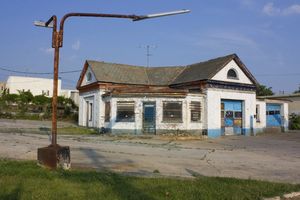 First, the Herald-Sun makes official today something that's been buzzing around that corner for a while.

The beautiful one-time Gulf gas station at the intersection's southeast corner is under contract to developer Bob Chapman, who redeveloped the Trotter Bldg. across the street and whose Traditional Neighborhood Development Partners worked on the Trinity Heights renewal.

Chapman's been looking at the MM Fowler-owned station since the fall, performing environmental assessments and tests on the site.

He told BCR in October that the Fowler organization is publicity-shy and preferred not to have news of the impending sale in the press until the deal was ready to move forward.

The garage doors on the building were open a number of times through the fall as tests for oil contamination and other problems proceeded on site before a reported Feb. 1 option expiration date.

All of which makes the news in today's H-S that Chapman expects to close by August very good news indeed.

Meanwhile, BCR's learned that the King's Sandwich Shop rehab sitting kitty-corner to the station is making headway again with its own revitalization.

Work paused there earlier this year in the tiny structure, which BCR heard required some adjustment in bathroom and other facilities to meet the latest-and-greatest code requirements. 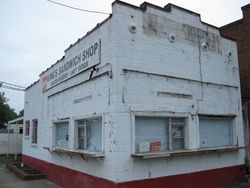 T.J. McDermott, one of the building's new owners, told BCR recently that electrical and plumbing systems work was underway on the facility.

T.J., who co-owns the home of a long-loved Durham institution with wife Maggie, told BCR recently that it's been a labor of love -- and a lot of labor -- to bring the building back:

"The renovation of King's has basically been a grass roots effort, with help from the immediate community, friends and family as time permits," T.J. said. "Between Maggie and I we have been working four jobs, raising a two year old, with one on the way, and...trying to get King's re-opened.  It has certainly been a great adventure, and we are enjoying it every bit of the way!"

Although a concrete opening date isn't set yet, T.J. tells BCR that they're still on-track to try to open "just in time" for summer.

Hooray in both respects!

The Kings renovations look great so far. Best of luck!

I love that Gulf building--I call it the "blue building". I think it's beautiful (how dare the H-S call it an 'eyesore!). Excited to hear that it's being saved, and I hope the developers retain some of its charm.

Sean Wilson's designation of 2010 as the Year of Awesome is definitely coming true! Kings, Fullsteam, The Geer . . .

By the way, only roughly 2/3rds of The Geer will be taken up by The Geer -- the showroom side that's parallel to Geer St.

The street-level garage bays that are parallel to Rigsbee are being prepped but not finished & are being held in reserve for a hoped-for future restaurant sublease. (Which would make more sense after these other upcoming businesses have had time to get a foothold).

FANTASTIC!
I love that building and that corner and am so happy it's getting more love!

So happy about this.

This is amazing! It's so nice to hear of an old building being rehabilitated instead of torn down. Bravo to Bob Chapman and MM Fowler for making this happen!

I second that emotion!

I'm so excited! I love this building and I'm so glad that someone is going to repair it. Hooray!

Now this is the Durham way and what will continue to make Durham distinct.

Lissa Gotwals had the best photo of this building at Through This Lens a few years back -- you can still see it at http://www.throughthislens.com/gotwals/centralpark.html (Lissa's site http://www.lissagotwals.com has amazing photos but isn't very link-friendly).

This building is irresistibly photogenic. I posted a shot of it just last month too:
http://ohsnapdurham.com/index.php?showimage=32

Yes! That's great news for that area! I have always thought that area had great empty buildings and glad to see of them quickly being swept up and rehabbed! That area seems to be moving along super fast now!

More on this little spot is at Endangered Durham here:
http://endangereddurham.blogspot.com/2010/03/gulf-station-saved.html
Along with some great photos of the station in its heyday!

great news!! i love that more movement is pouring into that area! i'm excited to see what becomes of the gas station, but to tell you the truth, i'm MORE excited about King's returning in some form!!!