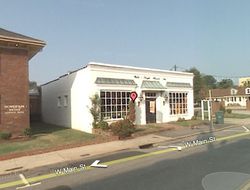 We're not sure what it is, but the pattern of the number "three" seems to be repeating itself in the downtown Durham area of late.

First we had 1000 W. Main St. filling up with three tenants in close succession, each of whom had revolved in the others' world on West Franklin St. in Chapel Hill in the 1990s.

Now, we've got a music venue under construction nearly right across the street from there -- marking the third such dedicated music performance space in the works in downtown right now (and that's to say nothing of sideline performances at other new spaces, from the jazz options at Beyu Caffe to live shows at the Pinhook to The Republic's dance parties and the like.)

This time, it's the old Wells-Lloyd Florist, a Main St. mainstay that closed a few years back and which is about to start construction to become Casbah, a music venue and event space in the Brightleaf Square area.

The club is the work of Jana Bradley, wife to serial Main St. restaurant owner Fergus Bradley, who's excited to be adding to a burgeoning live music scene in the Bull City.

While Casbah is the third-such new venue under construction right now -- along with The Geer at Rigsbee and Geer in the DAP district, and the still-unnamed club for which building permits have been pulled at Golden Belt, Jana Bradley is optimistic about the benefits that could come from having even more spaces for live music in the Bull City.

"It's great there's so many venues coming online at the same time," Bradley said in an interview this weekend. "It's nice to have a couple of different options for Durham," she added, noting that Durhamites have long had to venture to Raleigh or Chapel Hill for live music.

The new space will have a dedicated stage, lighting and a sound system, and a capacity of just shy of 300 people, Bradley noted. "It's a good space to have regional acts, or even second-tier national acts," she said.

There will be a full bar within the space -- but no food, though with a range of restaurants from The Federal and James Joyce to Alivia's to all of the options around Brightleaf (some owned by the Bradleys themselves), there's plenty to go around on that score.

And certainly, one advantage of having a music space is creating more of a draw for the whole area, Bradley noted.

"We're hoping to bring a lot of people down to Brightleaf Square to enjoy the area. There's so much going on down there already," she said.

Demolition within the space started in January, with construction permits pulled this month and actual rehab work slated to start possibly as early as this week. She expects the space to be open by late summer, or possibly a bit sooner.

Bradley expects to hold a couple of shows per week in the space, which will be rented out for different events or parties in the interstitial spaces between concerts, be it for DJ nights and dancing, private events or the like.

As for the space's name?

When Bradley entered the building, she noted this "great arched doorway" inside the main entrance that reminded her of Morocco -- and from there, the name stuck.

More music venues in Durham is always good thing. I wish the venue luck and will keep an eye out for the opening.

Crazy it's all happening at once! i hope they can all make it and feed off of each other, rather than hurt each other's business.