If you're in my same age group (the interstitial space where GenX ends and the Millenials begin), you may remember pop-rock band The Connells, whose catchy tunes featured videos that showed off their Raleigh hometown -- something this Floridian didn't recognize at the time, even though I'd hum along with "Slackjawed" whenever it came on WMMO back in my hometown.

I'm not enough of a music fan to know where Durham-based "hip-rock" band LiLa will end up ranking in the world of music, but a BCR reader sent along this, their new video, which does a nice job featuring haunts around Trinity Park and downtown Durham. And it certainly left me, well, slackjawed enough to want to share it here.

Given that Duke is favored to beat UNC badly enough next week as to have them qualify for demotion to Division II, it's quite fitting -- hometown hubris aside -- to have America's 24-hour sports net on West Campus next weekend.

Yes, there's visitors in town next Sat., March 6 -- and not just those of a Chapel Hillian variety:

Tell your mom and dad back home they can watch you on the pre-game, and come out to campus to see the ESPN stars roll through town if you get the chance next weekend.

Hate to do it twice in one week, but this morning (like the night preceding it) has gone fully over to the day labor. Back this weekend -- including a report from Saturday morning's WakeUp Wake County session on the Durham-Raleigh Falls Lake debate.

NCCU Breaks Ground on New Buildings: NC Central held its groundbreaking yesterday for a new school of nursing building, an additional residence hall, and a parking garage -- all told, $70m in construction pushed through to help the institution, mandated by the state to grow, to meet demand for academic programs and to ease parking and housing crunches at the HBCU. (Herald-Sun #1, #2)

NC54 Ranks High in NCDOT Non-Politicized Study: A new state ranking program intended to get what BCR thinks of as the Down East backroom power grabs out of NCDOT project prioritization has listed NC 54 between NC 55 and the Southpoint area as a number one-rated item on one of the agency's numerous statewide priority list. There's about five times the number of projects as there is funding through 2020 -- but no matter how NCDOT ends up slicing prioritization between mobility, infrastructure health, and safety, it's hard to imagine the corridor not getting funding for what could be a transit-ready expansion. (Herald-Sun)

Broad Street Cafe A-OK: We noted this on Twitter, and commenters here pointed it out, but just to put a (tuning) fork in it, the Broad Street Cafe won its battle of the bands with neighbor Waldo Fenner, who no-showed for the meeting saying he had the date wrong, but who told the N&O he'd consider appealing to Superior Court. (Herald-Sun, N&O)

Internet Sweepstakes Scrutiny: The Indy's Lisa Sorg and Joe Schwartz have a nice look at the scourge of Internet Sweepstakes "cafes," essentially video poker-style schemes that fit the definition of legality (so far) through some clever maneuvers. They map out where they are in the Triangle, and no surprise, they're setting up shop in some of Durham's (and the Triangle's) most impoverished communities. A must-read if you've not heard of this phenomenon. (Indy Weekly)

Rockwood gets filled up on "Station" concept; The Fish Shack setting up shop instead 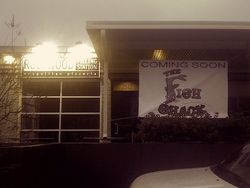 This recession has been relatively merciful on local restaurants and eateries, at least those situated in and around Durham's downtown core. And the Rockwood area has been one of the most-blessed districts, from Local Yogurt and Wine Authorities to Beard-award-nominated Nana's to The Q-Shack and Thai Cafe.

Into that mix last year stepped Rockwood Filling Station, described by one Yelp'er as "a high end pizza place in an old gas station that still has the power garage doors in place and rigged to go."

It opened in summer 2008 to heady acclaim, particularly given its Scott Howell pedigree -- Howell, the owner of aforementioned neighbor Nana's, was identified as one of the movers behind the concept.

Reviews over time online were mixed, with some superlatives mixed in with the occasional barb over service or especially price. Of late, banners out in front noted the presence of extended lunch hours and the like, a sign perhaps of a desire to draw more folks in.

Then, as of Sunday, Rockwood Filling Station hung up its draught beer pumps and washed the windshields on its massive glass doors for the last time.

But not for long -- a new eatery's coming soon, as soon as next month, with a name and logo familiar to those who've ever been to, oh, to the Rockwood Filling Station before.

Continue reading "Rockwood gets filled up on "Station" concept; The Fish Shack setting up shop instead" »

Sorry, folks -- no BCR updates today. Don't miss the Herald-Sun and N&O stories today on Broad Street Cafe's future and on NC 54 making it to the top (in one category) of the rankings for North Carolina's road priorities, in a process that won't sweep up the East End Connector and other loop projects for a few months more.

Besides the approval of a Treyburn-area site for a new middle school (touched on in an earlier BCR story), the approval of the new courthouse, and the State of the County speech, there's a few things at play in today's papers:

PocketGear Gets Bigger: Motricity spin-off and American Tobacco tenant PocketGear got bigger with the acquisition of Dallas-area mobile apps firm Handango; the firms play outside the Apple app store world to write apps for Android and other mobile phone OSes. PocketGear will keep its HQ in Durham. (WRAL)

BSC Faces the Music Today: Popular restaurant and music joint Broad Street Cafe has a hearing today in front of the Board of Adjustment, a continuation of an earlier hearing and the latest round in a debate over the future of the entertainment spot, which faces opposition over noise from a neighbor. (N&O)

Leaders, Ex-Cons Powwow: Kudos to the Herald-Sun's Monica Chen for a thoughtful treatment on this story -- and to Durham leaders for taking part in this. Mayor Bell, city manager Bonfield, Judge Bushfan, and DPD's Jose Lopez were among those who sat down with six one-time offenders including a number of gang members. It sounds like a straightforward talk of the barriers these men have in getting jobs -- along with feedback on how they can improve their chances. It's a solid read. (Herald-Sun)

Page states the State of the County -- but did he have all the pages to his speech?

The media coverage of last night's State of the County speech by BOCC chair Michael Page (Herald-Sun, Indy) highlights many of the themes one would expect: innovative county programs, new employers, awards won and some great performances by County employees. That meshes with what I heard in the portion of the speech I was able to catch.

But perhaps the most interesting thing in BOCC chair Michael Page's speech last night was what he didn't talk about: the question of whether a tax hike is in the cards for county government.

The Herald-Sun's lead notes Page's strong statement about the need for county leaders to continue to be "fiscally conservative;" both the H-S and Indy go on to note that Page stressed the county's ability to make it through last year's budget crisis on the back of spending cuts, and he noted that the BOCC did not raise taxes last year.

But do the rhetoric and the reality line up?

Continue reading "Page states the State of the County -- but did he have all the pages to his speech?" »

In an exceedingly long session last night, the Board of County Commissioners, as expected, approved the construction contract for the new Durham County Courthouse. The BOCC also voted in favor of zoning changes, a site plan and permitting for a new middle school on land donated by the developers of the Treyburn community in North Durham.

The Herald-Sun notes the debate that occurred over the Treyburn school site. It wasn't a debate that covered new ground; non-Treyburnites raised concerns over traffic flow on Snow Hill Rd. from the new school, though Commissioner Ellen Reckhow and others noted that the school was actually a downzoning from initially planned residential units, and that there'd be less traffic and environmental impact from a middle school than from houses.

Similarly, the DCABP's Lavonia Allison -- in what earned at least a nod of support from BOCC'er Joe Bowser -- raised concerns about a new middle school being built in North Durham when there was capacity at Chewning, and frowned over what she warned was a resegregation of schools.

Regular BCR readers know that diversity in schools is an issue of personal interest for this writer, too. And it was interesting to hear the arguments made in the debate in favor of the new middle school.

Courthouse final vote set for tonight -- and how good a deal is it?

The BOCC tonight is set on Monday night to approve the construction of the new County Courthouse set to rise into the sky just north of Dillard St. adjacent to the jail.

We talked here a couple of weeks ago about the plan, which saw a generally-receptive audience among BOCC members and opposition only from Durham Libertarian party activist and former City Council candidate Matt Drew.

What's happened in the intervening weeks?

Well, the financing mechanism -- which relies on the County's financing the project's construction for almost three years using cheap, short-term dollars via the power of Durham County's top-shelf AAA credit rating, and then getting permanent take-out financing three years hence -- is on the consent agenda, so it's ready to move forward.

And the construction contract itself is just a 15 minute item on the regular business agenda, after a much-cheaper but much more chatty discussion over a new middle school site near Treyburn. That construction contract, by the way, comes in on the cheap side of cheap -- just under $75 million from low-bidder and megabuilder Whiting-Turner (plus some pocket change for project management and consulting), far below initial estimates of $117 million.

Barring a surprise of some sort, the shovel-ready project may see shovels in the ground in a few weeks. But is the financing a good deal?

We've heard some criticism of it, but after crunching the numbers in an admittedly back-of-the-envelope way, this observer is feeling better about the numbers.

Continue reading "Courthouse final vote set for tonight -- and how good a deal is it?" »