It was a pleasure for yours truly to get to spend a few minutes chatting with Durham's mayor, Bill Bell, at The Republic downtown last month during our first BCR Mixer event. 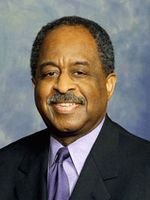 If you missed your chance to talk with hizzoner, this week you've got a second downtown opportunity at which to do it.

Only this time, the mixing will be done by Mayor Bell -- and he'll be standing on the other side of the bar.

Bell will be tending bar at Revolution downtown this Tuesday, Jan. 5 from 6pm-8pm, the first guest bartender in a three-week series this month, which also marks the one-year anniversary for the popular upscale downtown restaurant.

20% of each guest bartender's proceeds go to a charity of the mixer's choice; in Bell's case, that'll be the John Avery Boys and Girls Club.

McKinney partners Jeff Jones and Jonathan Cude will be up on Jan. 12, benefitting the Urban Ministries of Durham. The following week, the stand-in barkeep will be Mr. Downtown, architect Scott Harmon, with proceeds going to Builders of Hope.

did you know hizzoner is what mike peterson used to call himself? in his email address, that is.

I bet Peterson has another nickname in his new home.