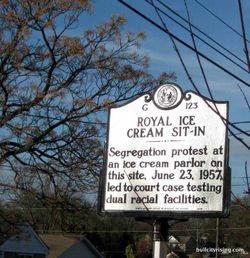 Over fifty years ago, seven members of Durham's black community dared to defy a City ordinance and attempt to get service on the "white" end of the popular Royal Ice Cream shop.

On Sunday, surviving witnesses to that history unveiled a marker to that long-underappreciated moment in the civil rights battle.

At one point during the afternoon's ceremony a descendant of the then-owner of Royal Ice Cream came forward at Sunday's marker dedication to stand together with longtime Durham and NC Mutual historian R. Kelly Bryant and marker recognition lobbyist Eddie Davis to celebrate the occasion.

It was an important reminder of how far we've come since the dark days of Jim Crow laws and segregation -- and how much difference moments like this one sit-in and the ones that followed made in the life of so many. 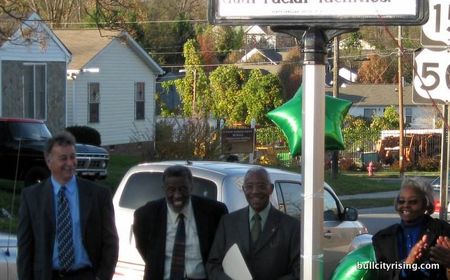 It was a day of notables, including (from left in the above photo) shop-owner descendant Ugo Coletta, protest organizer the Rev. Douglas Moore, attorney Billy Marsh (who bailed out the protesters on the day of their arrest), and sit-in participant Virginia Williams.

They were joined by 75 or so Durhamites turned out for the event, ranging from Mayor Bill Bell, City Council members Farad Ali and Mike Woodard, and one-time Councilman Thomas Stith to the overwhelming majority of Durham's legislative contingent, including state Sen. Floyd McKissick, Jr., who helped lobby the state to grant the marker.

Ceremonies and plaque aside, one of the most noteworthy things about the event was its ability to draw together so many who'd themselves played a role in the 1957 events, and who were able to share their first-hand recollections of the battles and change sparked in part by one day at an ice cream parlor.

R. Kelly Bryant opened the remarks by reflecting on the battle to get the story of Royal Ice Cream told. (Previous BCR coverage: initial N&O/WUNC coverage, a 2007 50th anniversary, a second-chance for the marker, NC's approval of the marker, and its initial 2008 unveiling.)

"You know, this is a day I never thought would come around," a reminiscent Bryant told the assembled crowd. He noted that he and onetime building owner Charles Dunham had done an interview with WRAL back in 1990, talking about the sit-in and trying to draw attention to its role in civil rights.

Ironically, Dunham himself wasn't able to participate in the sit-in due to military service obligations; after his war service, he returned to the Bull City and ended up buying the Royal Ice Cream parlor, which would be the home of Dunham's Food Services until the middle of this decade. 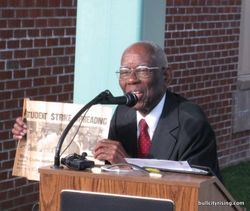 "We are happy, very happy, that they went through with it, those few that did," Bryant added, crediting Rev. Moore's leadership and inspiration. "And they said they were not afraid. They felt good over it."

"I have a copy here with me of the Carolina Times. This tells about the situation in Greensboro," Bryant said, holding the paper up to the audience. "This was when we became real serious about what had happened here, after getting this copy of the Carolina Times. And its date is February the 5th, 1960, a few days after the Greensboro sit-in was held."

He quoted from a later newspaper article from 1979 by former Durham assistant DA Blackwell "Dog" Brogden, which Bryant paraphrased to the audience's amusement as saying: "It was in 1957 when the sit-ins started in NC, in Durham, NC, and that if anybody says it was in Greensboro first, are a -- what do you call it? -- a bald-faced lie."

Still, it took years of back-and-forth work with the state's Department of Cultural Resources to get the recognition made tangible in the roadside historic marker. 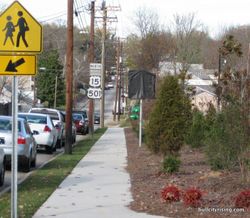 "We were denied because they said the info we were submitting with the application did not meet the requisites of state-wide significance."

"Then came along Eddie Davis, who insisted on our celebrating the fiftieth anniversary of this event," Bryant said, noting that a different membership on the advisory committee heard new research and arguments from the Durham crew.

The plaque was first unveiled last summer at Union Baptist Church, as construction work at the Union Independent School in Durham that sits on the onetime Royal Ice Cream site was underway.

(It's a nice irony in a sense, that the school -- which provides private school-quality educations for free to largely-black Northeast Central Durham -- sits on a site that is itself civil rights history. Teardowns are never nice to see, but it's good to see one happening for a public good, at the least.) 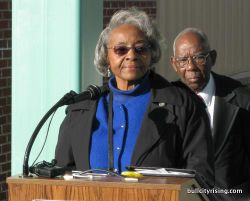 Virginia Williams, one of the surviving "Royal Ice Cream Seven" members present and speaking for the members of the group, drew laughter from the crowd with her thanks to Bryant and Eddie Davis for their lobbying of state officials -- whom, Williams said, never stood a chance.

"I know Kelly was a nightmare to the people in Raleigh. Kelly was determined something was going to get here if they had to put him here on the corner," she said with a smile. "Then he teamed up with Mr. Eddie Davis, and they sure enough had trouble then. Double trouble."

"I want to thank them more than they will ever know," Williams said, adding her thanks to the late black business leader David Stith's ACT organization for helping to organize the sit-in. 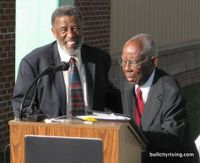 The Rev. Douglas Moore -- who continued to be active in the civil rights movement after his Durham days, and eventually went on to serve on Washington, D.C.'s city council -- said he was "delightfully surprised" by Durham's recollection of the historic events at the Royal Ice Cream parlor.

"I'll tell you something, I come from a family that doesn't cry too much," Moore said, noting he kept dry eyes at his mother's and grandmother's funerals.

"But I tell you, this morning, as I was on my way down to the church... uncontrollably I began to cry. I guess an angel said, it's time for you to break down. And I broke down." 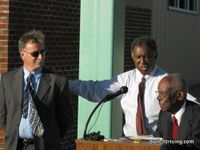 "There are so many of you who are standing here today, like Virginia here and others, who made a difference. And now you've said something to the world and to the state: We will not forget those who struggled for us," Moore said.

Sit-in recognition organizer Eddie Davis (center in photo at left) introduced Ugo Coletta to the crowd's surprise; the relative of one of the then-owners of the parlor stood shoulder to shoulder with Bryant and Davis in one of the most moving parts of the afternoon.

From a history perspective, the self-described "mystery guest" -- longtime Durham attorney William "Billy" Marsh, Jr. -- provided some of the most interesting background elements on the sit-in events. 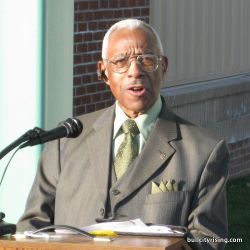 Marsh, who defended the students in court in the late 1950s, joked to uproarious laughter from the crowd that it wasn't exactly the remuneration that drew him to the case.

"[The presiding judge] let the kids out, fined them $25 and the costs. They're the brokest clients I've ever seen in my life. Doug Moore didn't have five cents. If they'd have been served down there [at Royal Ice Cream], he couldn't have purchased a glass of water," Marsh said.

And although the call he got one Sunday afternoon in 1957 initially described the protesters as students, Marsh said they had far more to lose in some ways than those who would follow in their footsteps in Greensboro three years later.

"And these people who participated in this sit-in were gainfully employed. They were not students anywhere," Marsh said, adding that religious beliefs in the immorality of segregation were a key motivating factor for Rev. Moore and the group.

"The Greensboro affair, with students from A&T College, now A&T State University, were students. They were never arrested; they never went to court. But this religious group went to court," Marsh noted.

"And I want you to know the seven young people who were arrested were never harassed, never locked up, and never, never handcuffed."

While the sit-in was, as the presiding judge noted, an attempt to find a "test case" in the civil rights battle, the NAACP ultimately didn't take the case along to the federal Supreme Court level.

"They felt that because Mr. Coletta and Mr. Porcelli were obeying a City ordinance in connection with an easting establishment -- you had to have a separation of the establishment based on race," the case wasn't ideal for a federal challenge, Marsh said.