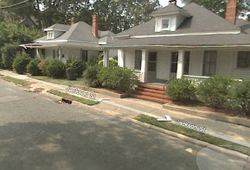 We don't have this confirmed from any official sources, but a Morehead Hill resident has informed BCR that talks to save two houses behind the Healthy Start Academy charter school in Durham's West End have failed to reach an outcome that would save the properties.

Our source says that local non-profit Builders of Hope (featured earlier this year at BCR for their proposed work in the Cleveland-Holloway neighborhood) worked with the HSA charter school on proposals to either move the two Jackson St. houses or rehab them on site, but an agreement was not reached.

No word yet on what factors played into that decision, or how soon the houses would come down, though there's a report that a Wednesday demolition is possible.

Why do people chose to spend money (demolition) rather than make money (donation or rehab + sale) is beyond me.

The likely reality is that (i) the homes will be demolished this year; and (ii) Healthy Start will be out of business (and their site vacant) within five years.