Glimmers of hope for Duke Park progress on bathhouse, parking

The sloping hills at Duke Park near the site of the one-time pool makes the popular city park a perfect mini-amphitheater for performances, like the beloved annual Beaver Queen Pageant.

At times, the residents of the neighborhood might tell you, the ongoing scrimmage over the future of the pool's bathhouse and park parking issues have felt more like a performance of a Kafka play. 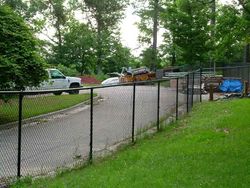 For some time, the Duke Park Neighborhood Association and a related 501(c)3 non-profit have been working to gain control of the bathhouse and renovate it into a community center -- sometimes asking for City dollars, sometimes planning to rehab it themselves. (For more history, see last month's post on the discovery that the bathhouse was used to store molding old parking tickets and utility bills.)

At the same time, while the park draws kids and parents from around Durham and beyond its borders who cram nearby streets with vehicle, a park parking lot has been closed for years, fenced off and used to store City vehicles.

But it's the holiday season, a time for hope. And this year, there's hope that city manager Tom Bonfield is shuffling staff closer to an answer on this one.

On the parking lot issue, Bonfield tells the neighborhood that he's working with departments to get stored equipment out of the Duke Park lot.

"I have reiterated to staff that this needs to happen soon and will continue to press this issue," Bonfield said in an email to neighborhood activist Bill Anderson before the holidays.

And Bonfield added that while the lot will be clear, neighborhood input will happen before the lot is reopened to traffic.

"A neighborhood meeting needs to be organized to discuss whether the neighborhood truly want the parking lot to be reopened to the general public once the materials are removed as well as if and how gate entrances will be managed," the city manager wrote in his email.

Meanwhile, a bollard installed at the Knox St. entrance to the park has been cemented, after ongoing challenges with big vehicles driving into the park for picnics and the like -- not quite a desirable activity in a park that is these days meant to be pedestrian-only.

As for the bathhouse, that issue is falling to new General Services director Joel Reitzer, who's looked at the facility and determined it needs a "more extensive evaluation" to determine its future.

A firm's been hired to perform field work to assess the state of the bathhouse, Bonfield writes; a report is expected to be issued by Christmas.

Erosion control and storm pipe repairs will be installed this spring as well.

(Hat tip to Barry's Dependable Erection blog for the above photo.)

I have known those have been there for years. Its was in 2000 that I found out about it, guess I should have told someone in my park association. I wonder if I can get squatters rights if I stay there for a few years.