CH to Durham: For Halloween, send cops, not partygoers 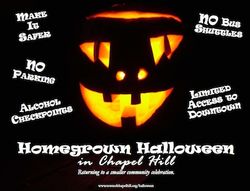 No regional dig here, merely a point of amusement to this observer in the timely juxtaposition of two items in the public sphere.

First, our brethren to the southwest had a lovely Halloween celebration, by all accounts -- not that many Durhamites were there. From the N&O:

Despite increased efforts from Chapel Hill police to limit crowds, the Saturday night block party [50,000 attendees] was larger than the 35,000 people who attended last year. But attendees said fewer people lingered on the street because of a greater police presence and mandatory cover charges at downtown bars.

In 2008, town officials launched a “Homegrown Halloween” initiative to limit non-residents from attending and to cut thousands of dollars in cleanup costs. The crowd was far smaller than the record 80,000 people who showed up in 2007 to celebrate, which caused town officials to limit the celebration.

The presence of out-of-towners during big gatherings has been a concern for Chapel Hill, which a few years back canceled its popular Apple Chill street festival after purportedly gang-related fighting broke out.

(And last year, the Halloween fun on Franklin St. caused a shutdown for one of CH's neighbors -- with cheek-by-jowl Carrboro going all law-and-order on its neighbor, setting up checkpoints at its borders to discourage anyone but Carrboroites and their approved visitors from driving through the town on their way to the celebration.)

But there was one group of Durhamites welcome at the Chapel Hill Halloween festivities this year: DPD's finest, whose assistance was requested under a mutual aid agreement between the two municipalities (and for which the Bull City got reimbursed.)

On Saturday, October 31, 2009, the Town of Chapel Hill expects up to 70,000 people to gather in its business district for what has become an annual Halloween event. The Chapel Hill Police Department does not have adequate personnel resources to manage such an event and has to depend upon officers and deputies from outside of their jurisdiction for assistance.

Musing for next year: perhaps the best way to sneak into the Chapel Hill festivities would be to dress up as a Durham PD officer?

I hear Orlando Bloom has a costume available....

Incidentally, the eye candy above -- I mean the jack-o'lantern, not Orlando Bloom, you crazy movie fans streaming here from your Google Alerts! -- came from the Town of Chapel Hill itself, whose web site this year helpfully contained ready-made graphics for the media to use, thoughtfully including all kinds of factors as to why one shouldn't venture in for a "hometown" celebration. 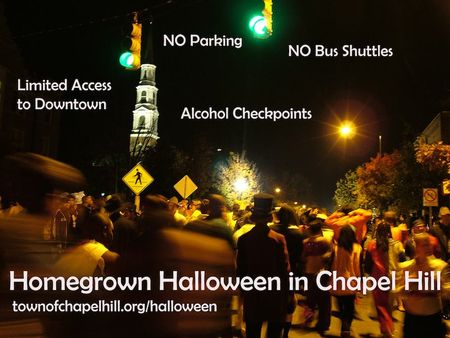