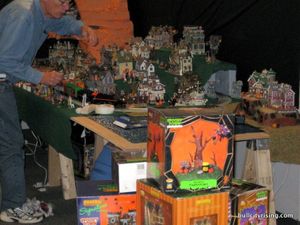 It started as a passing fancy of a sort for one South Durhamite -- one which came to take up a bit more space in his garage with each passing year: a collection of miniatures that form ghastly and ghoulish villages.

And it drew children from around the neighborhood for the past six years, an ever-larger porcelain portfolio that crowded out cars and lawn-mowers to make space for October's fun frights.

Now, this spooky hobby has finally outgrown "Wolfman" Tim Gabriel's home, and found a home this Halloween season at the Museum of Life & Science. Gabriel's "Halloween Village" opened at the North Durham family favorite today and will be on display until November 1, perched over near the space exhibits in the museum. 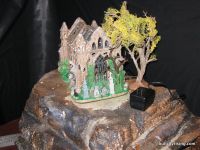 Gabriel's worked throughout the year to find a new home for his exhibition, whose very history is an interesting sidelight for a man who fills his days working in the financial department for IBM down at the Park.

"I've always loved Halloween, and I started building a village in my garage, so that the children could enjoy it in my neighborhood," Gabriel told BCR while he and a crew of family and friends toiled away to set up the village this weekend.

As the display grew -- to take up more than 200 sq. ft. in his garage of animated and illuminated Halloween fun -- he wanted to find a bigger, better seasonal home for the show. 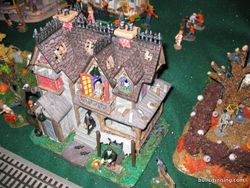 "I really wanted to do something more with it than have the people from Garrett Farms see it," Gabriel said. "They had faith in this, so we're here now in the Museum," he added, noting the interest that the museum's VP for exhibits Roy Griffiths took in the effort.

The result is a bigger home for an exhibition that this year is projected to be seen by upwards of 20,000 visitors over the next two and a half weeks.

The miniatures are spread out over a range of different regions, each of which has its own theme, often with a Carolina bent.

Haunted pirate ships wash ashore on an ingenious re-adaptation of a mottled-glass patio table that (combined with some colored cardboard) gives the impression of a seafront, to make -- what else? -- "Mortal Beach." 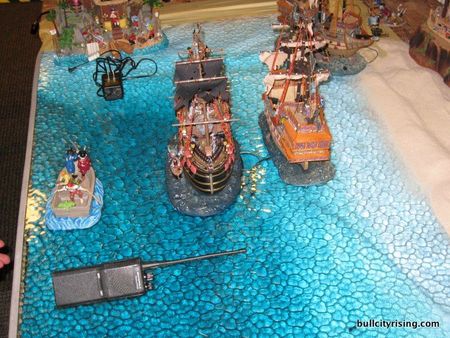 In another part of the exhibit, another October tradition is apparent, as midway rides, food stands and a petting zoo combine to create the "Scare Fair," a nice homage to the North Carolina State Fair, right down to the layout of the booths, it seems. 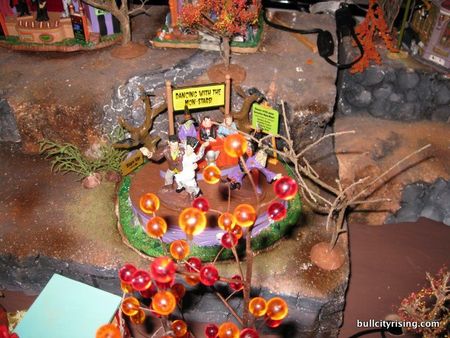 Even the Garrett Farms homestead gets in the act with a tribute: Garrote Farms.

Nearby sits Scalpel Hill, bordered by a cemetery and, next door, the downtown Durham area, which Gabriel -- himself a close friend of former Office of Economic and Workforce Development chief Alan DeLisle -- notes is "not haunted now" in real life. "It's our least scary area," Gabriel joked.

Speaking of downtown, many of the sets on which the porcelain figures find themselves perched actually came from discarded old building materials from a downtown building, nicely carved up and painted to provide a scenic backdrop for the exhibit. 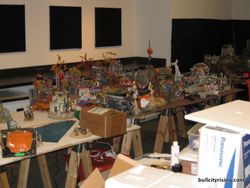 This year's larger venue was supported by corporate contributions from two major companies; the Lionel Train company provided a model train that runs through the locales, while LeMax Collections (whose web site notes the firm is "at the forefront of the rapidly growing pastime of lighted villages") provided a number of new village pieces for the show.

The Lionel train set features a nice high-tech feature: a camera mounted inside the engine, which wirelessly broadcasts its signal to a nearby TV for a train engineer's perspective as he barrels down the tracks in this Halloween village.

The set-up and testing of that train, like so much of this space-consuming activity, took the kind patience of the person Gabriel described as the MVP in his little hobby: his wife.

"A month ago, I had those four tables with the train running on them, I had them all set up in my kitchen area, running into my living room. It was all set up to make sure the train worked," he noted with a laugh.

Mrs. Gabriel is doubtlessly thrilled to see the exhibit getting a wider audience this year -- and, we're sure, to get her living room back, too.

The Halloween Village will be showing at the Museum of Life & Science (http://www.ncmls.org) through November 1.

We were at the museum yesterday and my 3 year old loved this display! Thank you Mr. Gabriel!

I've seen it online. It's a work of art. Well done Tim!

I forgot to tell Bull City Rising about the people who helped me (besides my understanding wife Shelly). Tanya Richmond was/is a major artistic force who created the "Scare Fair" and the cemetery. My daughter Mikki assembled the Garotte Farms neighborhood. Wil Seehorn was our train architect. Matt Fasnacht did a lot of the Pirate and Egyptian set up. And thanks to the blog for the wonderful article.

The pictures don't convey the incredible skill and creativity of each place in the special Halloween village that Tim created. One of my personal favorites is the Egyptial temple. Tim's village reflects the breadth of his imagination, inspired by his fondness of classic monster movies.
www.plussizeplum.com

My 10 yo son and I made a special trip there this week to see the village. We both really enjoyed it - wonderful work!