If you read my radio show co-host Barry Ragin's blog, Dependable Erection -- and you should -- you'd have seen many times his coverage of the ongoing saga of an abandoned bathhouse in Duke Park.

The neighborhood has wanted to get control of the structure, long unused by the City (which removed the pool in the early 2000s, after its '93 closure), for years, to fix it up and make it a neighborhood center using private funds. The City, on the other hand, has had one reason or another over the years for not transferring or leasing the structure to the neighborhood or the 501(c)3 it set up to handle the project.

Sometime this weekend, the structure was broken into, and two citizens who are part of the DPD's community-policing effort went inside to check it out.

And what should they find, beyond the kind of deterioration that happens when you abandon a building for years, except 1990s-2000s era old utility bills, helpfully containing residents' names and addresses, and undergoing what appears to be a process of mildewing. (Plus old bank deposit receipts and the like.) 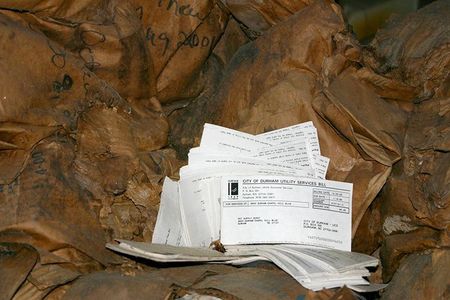 Naturally, residents like Barry are none too pleased with this -- the pièce de résistance being the fact that the building had been used for old parking tickets once before, but those were going to be removed, DPR promised a few years back.

Well, they lived up to the promise. Er, kinda.

So, now we know why the city hasn't wanted to lease the bathhouse to a community non-profit in order to have a community center. They've been using it for overflow file storage. I think we can all agree that storing 13 year old water bill receipts and 7 year old bank deposit receipts constitutes the best possible use of one of Durham's few (and possibly only) surviving WPA projects.

I will bow to the superior knowledge of our city administrators, and withdraw from the process of trying to build a community center in the old bathhouse. I am clearly barking up the wrong tree in wanting to do something like that.

BCR's prediction: Don't expect this one to escape the watchful eye of local media, well beyond the blogosphere.

I wonder what the national agencies that so eagerly accredited Durham's Parks & Rec department would have to say about an agency that's dragged its feet for years in helping a community that wants to, well, "play more" on its own dime? Or is it that Parks & Rec is so busy accrediting itself with national agencies that it lacks the time to figure out a fair disposition to a useful structure?

"...I wonder what the national agencies that so eagerly accredited Durham's Parks & Rec department would have to say about an agency that's dragged its feet for years in helping a community that wants to, well, "play more" on its own dime? Or is it that Parks & Rec is so busy accrediting itself with national agencies that it lacks the time to figure out a fair disposition to a useful structure?"
Sic 'em, Kevin.

The Graybar Electric Building on Duke Street just south of the Chesterfield Factory is also full of City of Durham crap - papers, drawings, boxes full of god knows what. It's an interesting approach to the dilemma we all face about what to do with our old paperwork. Some of us pay to have it shredded or incinerated. Some of us rent a storage unit. The City appropriates historic buildings, packs them full of crap, neglects them until the roofs fail, then lets someone else clean it all up. Brilliant.

Shameful for the City. They could easily turn this into a win for themselves and the neighborhood, but will they?

As I understand the story, the City and the Duke Park Neighborhood Association had reached a lease agreement last year -- with terms satisfactory for all. Then DPNA requested that the City give them $200,000 at the time of the lease agreement to assist in their fixing up of the bath house building. Since the City doesn't have the money to fix up facilities in active use, it's pretty clear that it didn't have cash to fix up an out-of-service building. DPNA's assertions about using "private money" to fix up the space needs to be tempered with this bit of knowledge.

DPNA came close to reaching a lease agreement with the city in 2006, during my tenure as president of the neighborhood association. There was no request for capital improvement money from the city at that time. The main sticking point in the lease, from DPNA's perspective, was the inclusion of a right of renewal clause. DPNA wanted, and i believe this is appropriate, to maintain the right to renew the lease on favorable terms.

At that point, after 2 years of negotiations, someone in the city real estate office asked the question: Is DPNA a registered 501(c)3 corporation.

The answer is, of course, no. Only a handful of Durham neighborhood associations are actually incorporated as not-for-profit entities. Negotiations came to a halt as the city realized it could not enter into a lease agreement with an unincorporated entity (Would have been nice to have had that question asked at the very first negotiation session two years earlier, wouldn't it?) However, the incorporated Duke Park Preservation Initiative, founded in 1995 to acquire an undeveloped parcel of land in the neighborhood and convert it into a park, stepped up and entered into negotiations with the city to lease the bathhouse in late 2006.

By early 2009, those negotiations had gotten exactly nowhere. By that time, the bathhouse had continued along its 16 year arc of neglect, with exactly $0 being spent by the city of Durham on maintaining the building*. DPPI asked the city of Durham to provide an estimate of the costs of dismantling the building, recycling and tipping the building materials, and replacing the existing structure with a minimal, cinder block, restroom facility. The park is used primarily by people who do not live in the neighborhood, unlike many other city parks. Because of this, the need for restrooms in the park is paramount. Otherwise, with 100-150 toddlers running around the playground on a pleasant Saturday afternoon, you can imagine the difficulties a lack of facilities would create.

The city came back with an estimate of approximately $225,000 to remove the bathhouse and replace it with a functioning bathroom structure.

This is money that is not budgeted anywhere. In fact, during a meeting with the advisory committee for the Parks and Recreation Department earlier this year, only one of the 7 members of the committee had even heard of the Duke Park bathhouse.

Simultaneous with receiving an estimate from the city for replacing the bathhouse, DPPI also sought estimates from contractors on bathhouse renovations. those estimates ranged from appx. $150,000 - $240,000.

In other words, roughly the same cost or less to renovate the bathhouse into a community center as to tear it down and replace it with a couple of toilets.

At that point, DPPI began to to change negotiating tactics, and to constantly remind the city and the Parks and Recreation Department that this was the choice they were making. Spend nearly a quarter of a million tearing down a structure which, through the city's own neglect, was no longer useful, or put that money to use building community.

The sticking point is not, nor has it ever been, whether or not the city provides that money to DPPI to renovate the building. We asked for it in the 2009-2010 budget because, well, why not? If a tree falls on the roof, or if a vagrant lights a fire to keep warm and burns the place down, you and i will be spending that $225K anyway. Why not have something good to show for it? We didn't get the money. We're still willing to sign a lease and raise it ourselves, hopefully before the building has to be torn down.

Also - full disclosure. I am currently a member of the DPNA Board of Directors, and a member, although not an officer, of DPPI, Inc.