How big a story is the Durham P.D. overtime scandal? So big, it seems, that it got a significant discussion underway over at the Herald-Sun web site... and almost displaced the recent obits as the most-read story in the paper, as tracked in that little module on their home page that's so morbid, we at BCR have taken to calling it the Herald-Sun Death Panel: 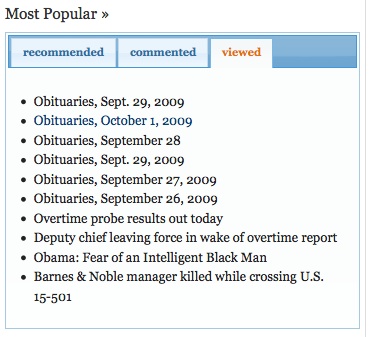 In local news (which is a bit light this morning)--

New NCCU Board of Trustees: Attorney Glenn Adams is the new chair of NCCU's board of trustees -- with recently-departed Capitol Broadcasting exec Paul Pope Jr. among the other new additions. Departing the board: the Bishop Eddie Long, whose distance-ed program in Georgia under the previous NCCU chancellor's administration raised red flags from the UNC system and the regional higher ed re-accreditation body. (Herald-Sun)

Transportation Bucks Back to DC: Durham is expected to lose out on $1.2 million in likely sidewalk and transit money from the 2005 multimodal bill due to clawback provisions in the deal, though none of this impacts projects currently underway. (Herald-Sun)

Community Helps on HVAC Theft: After a program serving youth in East Durham almost had to shut down after thieves stole an $8,000 A/C unit for its copper and wiring, the It Takes A Village Work Force program got almost a dozen offers for help from local businesses in replacing the unit. The owner of McElheney Homes is replacing the unit, while the King's Daughters society (former owners of the Buchanan Ave. home) is providing a philanthropic donation. (Herald-Sun)

Quote from the H-S regarding the transportation $$:
"Bush and Congress disagreed on how much spending the bill should authorize. They compromised in part by saying that when it expired, federal regulators should "claw back" any money states hadn't actually signed contracts to spend.

The expiration deadline passed Thursday at midnight, so in the absence of any further action from Congress, the states are out a combined $8.7 billion.

The Herald Sun waits a day to publish obituaries online. When a prominent man like Roy Council Jr. dies on Monday, with his obit appearing in print on Wednesday and online on Thursday, it makes more sense that the obits would be the most popular story.