751 oppo calls for a recount; Ruffin suggests courts are the appeal route

The case of the 751 Assemblage project doesn't ever seem to quite make it to resolution. 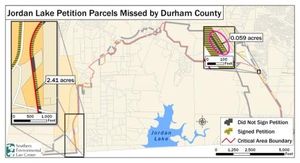 The latest twist: a press release on Thursday from the Haw River Assembly and the Southern Environmental Law Center announcing that the groups are challenging City/County Planning director Steve Medlin's finding that a protest petition on a Jordan Lake critical watershed boundary change was invalid.

A protest petition, if deemed successful by Planning, would have required a supermajority of 4 out of 5 BOCC members to support the project -- one more vote than the narrowly split BOCC provided in its 3-2 vote in favor of the boundary move.

Planning Dept. staff had tallied up the petition in the week before the Board of County Commissioners vote, and found that the HRA and SELC had fallen short of getting signatures from landowners representing 20% of the statutorily-designated neighbors.

But these groups are asserting that Planning's count was off on the matter.

From their press release:

The petition was signed by 24 property owners who would be affected by the county's request to move the critical area boundary. Using the planning department’s own methods and numbers, they represented 20.9 percent of the owners eligible to sign a protest petition. A valid petition must have signatures representing at least 20 percent.

A review of the numbers and methods used by the Durham City-County Planning Department revealed that a large portion of an affected parcel of land owned by a signatory to the petition was overlooked in the department’s count. In a cursory glance, the large parcel might appear to be two separate parcels divided by U.S. Army Corps of Engineers property. The planning department only counted one fraction of the parcel as belonging to the signatory. A closer analysis of GIS data from Durham County and corresponding county records clearly show that it is one parcel of land and should have been counted in total as affected land owned by a signatory of the protest petition. A second, smaller parcel of land owned by another signatory of the protest petition was also missed in its entirety.

In comments to the Herald-Sun (which, like the N&O and the Indy, have prominent coverage of the matter), county manager Mike Ruffin says that the BOCC has already acted, and that the groups would need to take the matter to the courts for satisfaction.

All of which presents another hurdle for project supporters -- and possibly, another window of opportunity for project opponents.

The developer proposing a dense, mixed-use residential and retail community near Jordan Lake has been expected to bring their case for an upzoning for the parcels to staff and County leaders in the coming months, since the boundary move by itself is not sufficient to create entitlement for anything more than a significantly lower density housing than is proposed on the site.

The provisioning of City water and sewer to the site also remains an open question.

Yet all of those steps to come still depend upon the finding on the critical watershed boundary.

Not that the developer lacks legal opportunities, mind you; they've argued for months that former Planning director Frank Duke's autonomous decision to move the boundary line after the adoption of the UDO a few years ago was the only action needed to change the critical watershed boundary, and backed that up with a lawsuit against the County.

What's that we said to start off this article?

Oh, yeah -- that this case never seems to make it to resolution.

1. Why should the citizens have to pay court costs and attorneys' fees to remedy an error made by the Planning Department and the County?

2. Why were both errors in this case (Frank Duke's original power grab and the invalidation of the protest petition) in favor of the developer? Seem like a pattern?