Duke to break ground in Nov. on $700m-$1b hospital expansion

Just a few months ago, plans to expand Duke University Hospital with a new patient tower and cancer center were on pause, despite winning state regulatory approval, thanks to the economy.

That changed today with the announcement that the university will undertake an enormous expansion of its medical center facilities, declaring Nov. 6 as the groundbreaking date for 850,000 sq. ft. in new space. The university has pegged the cost at $700 million, though the Triangle Business Journal suggests that construction contingency and financing expenses could push the cost over $1 billion.

It's good news for the local job market: 1,500 construction jobs during the erection of an eight-story patient tower and a seven-story comprehensive cancer care center, both located on the site around the old Bell Building between Duke North and Duke South. Add to that 1,000 permanent jobs at the hospital when the expansion's done.

TBJ cites the current heavy utilization of the 1970s-era Duke North tower as a rationale for moving ahead even in difficult economic times.

A walkway between Duke North and Duke South will remain open throughout the four-year construction project, an effort that will take over 5,500 tons of structural steel.

Read more over via the TBJ's coverage, from Duke's press releases (one of many), or via the university's video releases:

To many parents and teachers, one of the more unpleasant outcomes of the No Child Left Behind law -- whose noble mission of forcing schools to be accountable for the success of all demographic subgroups in schools -- has been the tendency in many districts to centrally plan and program curricular choices, with districts in NC taking the guidelines transmitted from the Department of Public Instruction and mapping them out into precise directions for teachers with little flexibility.

Now Durham Public Schools is, according to reports coming in from some upset parents, taking a next step on this path with the implementation of Reading Street, a standardized reading comprehension system from the educational industry titan Scott Foresman.

I've received or been copied on three separate, heartfelt complaints from parents in the days leading up to the new school year -- parents whose concerns have ranged from outrage over what they say will be a move away from "authentic literature" to those who've said teachers are hesitating to speak up about the changes for fear of their jobs.

It's an unusual level of concern I haven't seen since this spring's school budget debate. Below the jump I'm presenting the side of the issue presented by parents and teachers. School board members, in an email thread from one of the parents involved promised follow-up from DPS administrators; I'll be happy to share their perspective on the story when they have a perspective to share (as it must be noted that their perspectives are not well-represented in the story currently.) 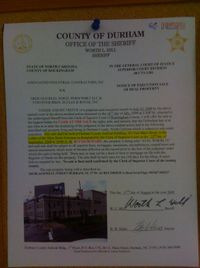 Did you think Struever Bros. Eccles & Rouse's problems with the Old Bull building at 300 Blackwell were over when a courthouse-steps auctioning of the Old Bull emanating from a lien by Code Electric was canceled in late June?

The H-S mentioned earlier this summer that there were multiple liens on the stately tobacco structure initially built by W.T. Blackwell and Co. at the corner of Pettigrew and Blackwell, and renovated in recent years by Baltimore-based SBER as residential units.

It looks like another one of those liens is moving along to the building-auction phase, this time out of a judgment issued against SBER in a matter brought by Associated Industrial Contractors, Inc. in Rockingham County.

September 22 at 10am is the date for this courthouse-steps caper. Got a few million bucks in cash and an appetite for subordinating your investment to "all superior liens, mortgages, easements, encumbrances, unpaid taxes and special assessments" that became effective prior to the lien that this judgment is based on.

Now the question becomes, will SBER find a way out of this latest rough patch? Will one of the two prospective local buyers (a group that, as of June, didn't include Capitol Broadcasting Co.) step in? Will this get settled only to have another lien and another courthouse sale rear its head?

This one likely ain't over by a long shot, folks.

Last night's discussion of the fate of Scarborough & Hargett Funeral Home -- whose new location at the UDI Industrial Park in south Durham has reportedly been stalled since last October -- revealed that the historic firm's owners have retained ex-county manager George Williams' architecture firm to convert the old Elkins/Johnson Chrysler on Mangum St./Jackie Robinson to a temporary funeral home until the UDI site is built.

The County extended the lease for the eminent domain-controlled S&H site on Roxboro through Oct. 31. The presence of the funeral home is preventing work from getting underway by hungry, likely low-bidding contractors on the new courthouse; the current hope is to have the new courthouse under construction by March 1. (H-S)

Williams' firm, G.H. Williams Collaborative, earned local media scrutiny for the firm's role in designing the Walltown rec center -- a project that ended up taking longer to get shovels-in-ground than hoped for.

A (Darius) Little less competition? Ward 2 candidate calls on Clement to drop out, endorse him 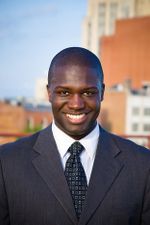 In American electoral politics, there are of course many ways to win an election:

Those are the four ways, anyway, that one might think it usually happens.

Durham City Council challenger Darius Little has taken what might be thought of as a fifth way: Ask your main opponent, an incumbent whose term dates to the Reagan Administration, to drop out of the race and endorse you, the challenger.

Little made the suggestion to Clement in an email message to the senior Councilman on Sunday, and obtained today by BCR via a public records request. Excerpts appear below. (Or download a PDF version of the full letter: Download Little-Clement-Correspondence)

Mr. Clement, we are at a very important time in this city and in order for the citizens of Durham to be served, effectively, they need a councilman who is willing and has the heart, determination, intellect and open-mindedness to help govern [our] city.  Moreover, they need a Councilman that is able, immediately, at the ring [of] the phone, to be able to address their concerns, without having to rely upon others.  You have served Durham well and your term in office speaks for itself.  By the same token, if you truly care about the people of Durham, I feel that you would analyze the pool of contenders, select a political offspring and withdraw from the election, for the sake of the people of Durham.  This election isn't about any of us, it is about serving the people.

I feel that once we remove self and look at the needs of the citizens, I am the only, truly, qualified individual in the Ward 2 race, to be worthy of even touching the seat in which you've sat for the past 26 years....

Tonight's Board of County Commissioners meeting agenda looks most intriguing for one agenda item in particular: the inclusion of a 30 minute update from staff on the status of the Scarborough & Hargett funeral home, which is nearing the end of its lease extension on grounds slated to become part of the new Durham County justice center that's replacing the aging county courthouse on Main St.

S&H holds a special place in the heart of many Durhamites, an institution of Durham's black middle-class legacy and of the rise and urban renewal of Hayti.

It's also, make no mistake, a mover-and-shaker in the political realm here, too.

The rumor mill has long held that it wasn't pressure from all those filthy, nasty greenfield developers that led to intense interest on the part of elected officials over the development review process in the last year or so -- but rather, complaints from Scarborough & Hargett over what it encountered in trying to build its new home off Martin Luther King, Jr. Parkway.

Now the funeral home stands in the way of the bulldozers needed to prep the justice center site. The BOCC extended the lease date from early summer to August 31 to give the funeral home more time, but there it still sits.

A June report from the Herald-Sun noted that an extension through October was possible in county manager Mike Ruffin's mind -- if S&H made significant process in the interim. Work's been halted at the UDI industrial park site that was to become the funeral home's new site last fall after what the home's owner described as bad soils and remains of an old dump were found. 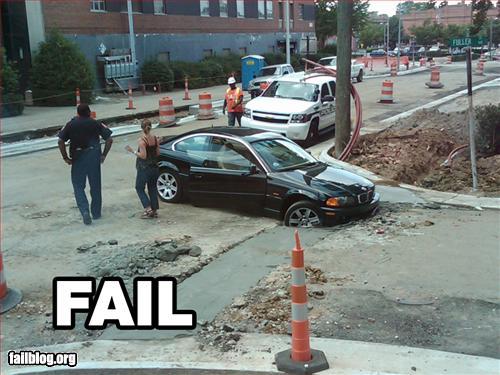 Yes, that's a shiny Beemer that found itself, er, inconvenienced in trying to make a turn onto Fuller St. from Main, it seems.

The comments over at FAIL Blog have been predictably sophomoric, and we'll leave them aside. What we're wondering at BCR, though: was the road blocked or passable at the time?

While the FAIL Blog'gers are sharp-tongued over the presence of construction barrels on the street, streetscape watchers know that Main St. has been re-opened to limited traffic in recent weeks. It's not clear from this photo whether the quicksand-sedan moment happened at a time when Main was detoured, or whether the BMW slipped through at a time when the road was nominally open to traffic.

Either way, just remember: if you drive through wet concrete on the streetscape, your car's likely to get a streetscrape. Har, har.

(H/t to Fullsteam Brewery for alerting us to this one via their Twitter feed.)

Herald-Sun launches new web site -- and fear not, you can contribute

The long-promised revamp of the Herald-Sun's web site has arrived.

The site, which launches this morning at heraldsun.net (though the old site says that heraldsun.com "will return shortly"), uses a social-media-linked content management system called Matchbin. Initially launches as a barter/auction technologies site, Matchbin has evolved into a platform with a strong focus on community newspapers -- with a mission of helping to create an online community and engagement with readers alongside the daily news.

Fellow Paxton Media paper the High Point Enterprise has also made the jump to the new hosted provider.

In outsourcing its web presence to third-party Matchbin for a "Web 2.0" site, the Herald-Sun is also staking its clear business hopes in an online presence in which you, the reader, help contribute content and value, too.

That's clear, in fact, from the intriguing button near the masthead, which transforms "The Herald-Sun" into "your Herald-Sun" -- the latter being a place you can go to, well, be an unpaid contributor to the Herald-Sun's content base (and thus its impressions, and thus its ad revenue, etc.)

Continue reading "Herald-Sun launches new web site -- and fear not, you can contribute" »