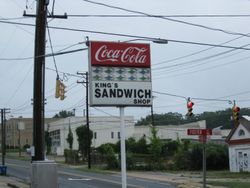 King's Sandwich Shop -- a long-time DAP-area institution downtown, described succinctly by one Endangered Durham commenter who simply said, "This is Durham for me," has a new lease on life.

The hamburger and hot dog stand closed early in 2007, prompting a wave of speculation over its future in light of ongoing land acquisition and speculation in the DAP district near Central Park downtown.

But it was purchased by T.J. and Maggie McDermott, a  municipal administrator and social worker (respectively) who moved to Durham a few years back -- encouraged by T.J.'s childhood friend and local designer Rob Emerson, himself a "sweat equity" partner in the project.

The plan is simple: bring King's back as a neighborhood corner hot dog and hamburger stand. There'll be a few new twists (veggie dog, anyone?) aligned to today's Durham, of course.

But one thing isn't changing: the name itself, for which the new owners got permission to continue using when they saw the passion of the new owners for the space and its history. 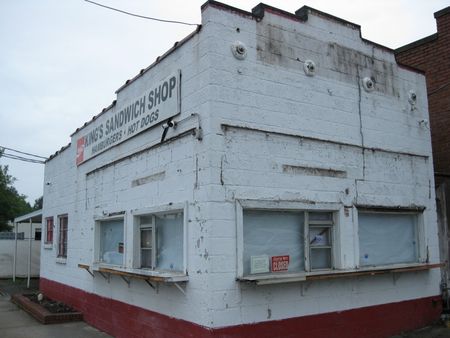 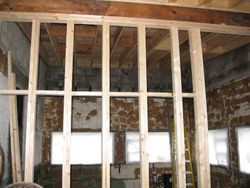 Before the grill fires up, though, there's quite a bit of repair work that needs to take place.

The team has made major improvements to the roof, which was in bad shape and has needed fresh joists and covers.

But the interior layout will remain the same; the team is preserving the metallic pattern backsplash that ran behind the grill, for instance.

Even the little rear bathrooms are staying put where they are.

It's a lot of labor for the crew, but clearly, it's a labor of love.

The McDermotts closed on the building in early April, according to Register of Deeds records, purchasing the building from the High family.

The original shop opened shortly after World War II and is a distinct part of Durham lore, remembered in a painting up on the wall at Watts Grocery and in the memory of many.

The Geer Street corridor of the DAP district has seen quite a bit of rehab of late -- from the signature repairs and improvements to the Durham Athletic Park ballpark itself, to Bob Chapman's restoration of an old printing plant (now CrossFit and offices) and an old gas station (home to Patanjali's Place yoga studio) across the street, to the advent soon of Fullsteam Brewery just to the east on Rigsbee near Geer.

And now, you can add King's back to the list. Should be a perfect place to head to after a game at the new old DAP, or after a pint at Fullsteam.

The timetable for opening is still up in the air; the nature of the repairs required means the shop probably won't open in time for the blues and beer festivals at the DAP over the next month or so, but don't be surprised if the new owners try some alfresco cooking on a grill, perhaps, to help show the 'hood they're coming back.

(Thanks to an alert BCR reader for noticing this and sending in the tip!)

"...And now, you can add King's back to the list. Should be a perfect place to head to after a game at the new old DAP, or after a pint at Fullsteam...."
Don't forget there's also a rather comely little theater space right next door. It ain't the DPAC but it ain't chopped liver.

Music to my ears. I considered purchasing myself and one time and hanging up my calculator!

I am SO stoked about this.

This restores my faith in humanity in a big way.

My discretionary food income will be heading back to King's!

Wow! We ask, you answer! Thanks for posting this and getting the news up so fast!

I used to buy hot dogs at King's for me and my friends, stuff them in my bag and sneak them into the ball games. Can't wait!

I hope they include fried bologna sandwiches and deviled eggs on the new menu...

I had driven to Durham from my hometown of Beaufort SC (after traveling in Europe, Canada, the mid-west and New England off and on for a 3 year period) with just my pickup truck and $400.

I remember seeing the architecture of the downtown buildings for the first time and saying to myself "this is my town".

And then finding King's for lunch clinched it. :-)

Have been in Durham 25 years and have loved every day of it--except for seeing King's close.

Also, was a neighbor of Rob Emerson's (for about 3 days) and have chatted with TJ, so really looking forward to this resurrection under their guidance.

Very happy about this, of course! The nicest people behind the coolest project.

I hope the Chuckwagon makes it back on the menu.

In recent years, it was great to get some comfort food after picking up a weekly supply of healthy produce from the Farmer's Market.

Chatting about the news of the day with other customers while your order cooked was always entertaining.

I love seeing an old favorite come back to life!

Great. Can't wait to see what TJ and Maggie have for us.

I really, really hope they have a veggie dog!

Yayyy! Never had the chance to go to the old King's, so this will be sweet... Couple other nearby sources of business: the Ag building and Central Park School for Children (my two kids go there). School lets out at 3:30, and I'll bet some folks will stop in for a healthy snack before making the trip home.

Frank,
How did you go all those years without eating? Most people would have died.

Hey you guys....I'm very proud of the two of you!! This looks like it really can turn out to be a nice thing her. Thanks for asking me to invest T.J.!!

Great job Tom, Maggie and Rob! I wish you were at home in Valpo doing this since we've lost so many of the old neat places.

Any idea what hours they'll be open? I'm fantasizing about seeing a play at Manbites Dog and then wandering next door to King's to discuss the show.

I'm so very glad. It is such a sad sight to see it sitting empty the past 2 years.

Now if only someone would fix up the super cool garage like building catty corner to King's and across the street from the new yoga place. My husband and I have had many discussions on what a great building it would be for a coffee shop or bakery. Those garage doors would be so fun to open up and allow outdoor dining. Perhaps Daisy Cakes or Scratch could take up residence. I'd certainly be a customer.

My hope is they do not forget to place the "Queen of the South" back on the menu . . . Sweet, sugar-water freshly brewed Lipton black Tea. If guidance is needed feel free to contact me.

To the new owners: I have a photo, circa 2001, of the King's menu board. You know, in case you want to satisfy all memories. And it includes my sentimental favorite: fatback biscuit. Email me if you'd like it.

Oops, sorry: I though the comment would link to my email address. Here 'tis: acbelan@gmail.com

The tentative hours are 11 am til dusk (it'll open in the fall). T.J. also plans to serve simple breakfast fare at some point, though not initially. Not sure about the prospects of staying open late just yet.