From BCR's WTF department: "Keep Durham Out of Carrboro?"

Look, we're used to a relatively friendly détente with our friends down in Carrboro and Chapel Hill.

Sure, there've been some uneasy moments in our relationship, like when it was rumored that one of our downtown developers tried to steal part or all of the Cat's Cradle from the funky town nestled against Chapel Hill. Or when Carrboro mayor Mark Chilton fought new water draws from Jordan Lake unless Durham passed growth restrictions mirroring those in his town and Chapel Hill.

On the Durham side, folks sometimes grouse about both of our Orange County neighbors' failure to provide sufficient affordable housing or even market rate housing -- something that has, frankly, driven residential growth in the Bull City. (Given how much tax revenue Durham gets because Southpoint had to get built on our side of the county divide, though, we shouldn't complain too loudly, perhaps.)

We complain too over our supposed comrades-in-progressiveness blaming all their crime issues on the Bull City -- from the snipes on Durham gangs' presence leading Chapel Hillians to cancel the Apple Chill festival, to the rather appalling rumor last year that law enforcement officers to our south reportedly described the target of their investigation into the death of UNC president Eve Carson as TOD -- a code word for "Thug Out of Durham," we heard at the time.

And we've gotten our digs in, too -- like when the president of the Chapel Hill-Carrboro Chamber of Commerce's president bemoaned the loss of his towns' perceived "coolness" to the Bull City, saying it "kills [him] every time" he hears a WUNC 91.5 FM call sign coming from the American Tobacco Historic District in downtown Durham.

Still, we're all friends, right? Hey, we like transit. And basketball -- even if we cheer for different teams much of the time. And we're all about food co-ops -- Weaver Street Market was an offshoot of the recently-deceased Durham Food Coop retail store's success, and now the new Durham Central Market is drawing inspiration from Weaver Street.

Plus: what could be wrong with a town that gave us Tyler's Taproom -- a town that, like Durham, sprouted up around the interesting confluence of rail lines and manufacturing in the post-Civil War era?

Which is why we were shocked, shocked, to get this photo in the inbox at BCR: 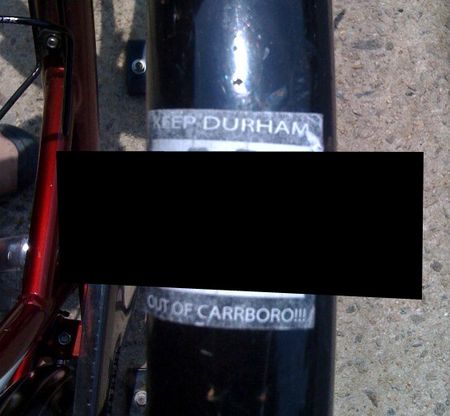 So fess up, Carrboro-ites. What gives here?

Hey, we're happy you're the densest city in North Carolina. We'd like some density, too. But don't be dense in the head about the good things happening in the Bull City to boot.

Otherwise we're just going to have to drink all y'all's water and build some more strip centers and apartment complexes.

Scratch that, we'll probably do that anyway.

So help me out, dear readers. Anyone know what this is about?

Yes, WTF?!?! I eagerly await an answer before I start a list of establishments IN DURHAM brewing their Carrboro Coffee Company beans.

What does that even mean? That sticker looks pretty old...maybe it was some fiasco from years back.

I agree with Will. I'll be watching this story closely as I too have noticed the "Carrboro Coffee Company" (aka Open Eye Cafe) logo going up in some of my favorite hangouts.

I think this means they want to tear down Carr Mill (Mall) - originally Durham Hosiery Mill No. 4.

Yep, guess they'll want to change the name of the town too, since it was named after Durham magnate and philanthropist Julian Shakespeare Carr.

Could it be a continuation of the Counter Culture Coffee/Broad St. ... thing?

Durhamite, your spot-on characterization of Carrborites was a wonderful laugh to wake up to! I'm also a former (~15-year) Chapel Hill/Carrboro resident who moved here about 2-3 years ago. Maybe Carrboro should be more worried about keeping the Carrboro folks out of Durham, lest they see how wonderful it is. :p (In good fun, y'all.)

Okay so if they want to keep Durham out of Carrboro why is he at Watts?

As the official representative of Open Eye Cafe ( I own it - though i don't know how one proves such things on blog comments...you could verify by email I suppose), I wish to convey the facts of this before it becomes more inflamed than it already is -

Our trademarked logo was stolen and used improperly. End of story. If you want to know what the owner of the sticker was trying to say (using our illegally co-opted logo)then you should find the owner of the bike first.

Please dear blogger, don't let this become a meal ticket sensationalism story for you - we are a hard working business trying to do positive things. a few minutes confirmation can tell you whether these are worth pursuing before making them inflamatory...

It makes absolutely no sense for our business to make such comments (that we are in no way in agreement with) about a town we admire and are working with, thru many quality-oriented establishments.
you contact me directly - scott@openeyecafe.com

Scott -- thank you for the excellent clarification.

But just what they were worrying about Durham doing in Carrboro is beyond me. Natalie comes closest, I think, with the Broad St/Counter Culture feud, but Broad St. moved to Durham years and years ago before finally closing.

I agree with Scott on contacting the owner of the bike sporting the sticker. I have never seen this sticker anywhere else, and I have never seen a sticker even remotely like this avaiable at the Open Eye, and I go their often.

I can also vouch for the authenticity of Scotts comments as I emailed him about the post earlier, and he told me the same thing that was posted above.

It looks to me like the sticker is on a bike RACK, not a bike.... maybe a reader near Watts Grocery can confirm/deny it's presence?

As Carrboro citizen working in Durham but playing in both towns, I can tell you that there are many people in Carrboro who have lots of respect for Durham and vice-versa. "Keep Durham Out of Carrboro" is not a movement in Carrboro and should not be taken seriously. Moreover, it is completely inappropriate for the maker of this sticker to appropriate a well-known logo that does not belong to them, just to attract attention to their cause.

Wow.
With the rather deferential response from the owner of the allegedly offending cafe being posted, I suppose this now qualifies as being a tempest in a coffee cup.

Our new motto should be "Durham: Stealing Carrboro's charm".

No malice intended towards Open Eye Café. As was noted in the article, the person who passed the image along to me called the business first and got a stumped reaction -- which was why I assumed that this was probably something very old or very trivial, though still amusing enough to warrant a mention here. (Which doesn't absolve me of the responsibility of making the check.)

Had I reached out to you before running the story, I still would have run the sticker -- only with the image blacked-out (as it now is.) Ultimately, it was a chance to look at an amusing (and somewhat bizarre) sticker; it was never intended as a dig on your business, and it's doubly troubling that the image was used without your permission. In a context where the sticker doesn't involve a business unknowing of its logo's misuse, it's an amusing find and worth a blog mention, but I certainly didn't intend to create a stir for your cafe.

In terms of a sensationalist meal ticket -- hey, Google Ads aren't so hot in terms of the cash, you know? Although it significantly outpaces today's blog earnings, I'd be happy to offer a donation of $100 from BCR's accrued ad revenue account to the charity of your choice, as a show of good faith and apology for not checking with you, the business owner, first -- something that, frankly, I typically do a better job of self-checking on.

Contact me offline (ksdavis@gmail.com) and we'll get that started.

Are you kidding me? All this for one freakin' sticker that somebody probably just made on a photocopier? Carrboro and Durham are both great...and my 1987 Volvo wagon gets 28 mpg on the highway, thank you very much.

Wow! Three years ago when I was searching for a new home in the Triangle, several people told me "anywhere but Durham" So of course, I picked Durham. Now with this bumper sticker, I think I must visit Carrboro more often. And since I've never visited the establishment's whose logo was stolen to use with this strange message, I will be visiting said establishment very soon. ;)

My next question is, what reason would someone have to use this logo to make such a sticker??

I don't get it...Durham would have to get thru Chapel Hill to get to Carrboro. Maybe they don't understand geography.

Well anyways, I never understand most rivalry between the Triangle cities, personally. Can't Durham, Carrboro, Chapel Hill and even Raleigh all unite and get along? Can't we all agree that we're all much much better than Cary? ;-)

i always enjoy watching the hipsters frolic in front of car mill (mall) and weaver street market when i have to pass through!

No, no, those are the hippies. Hipsters definitely do not "frolic".

The hipsters are hanging out behind OCSC.

I work at Joe van Gogh on Broad St, Durham. I just walked up the street a bit to look around. The sticker in question is still on a bike rack in front of High Strung. It has faded heavily and appears to have been made cheaply, as was suggested. Watts uses our coffee (which we roast in Hillsborough), so I don't know what the sticker could be talking about. Perhaps Broad St Cafe...? Maybe it was just made by some nutter trying to stir things up. Has it been spotted anywhere else? A friend of a friend of a friend says it appeared on a sign in front of Open Eye as well.

One appeared at Jessee's (new coffee shop) in Carrboro.

Scott -
While the use of your logo was clearly unauthorized and its intent a bit baffling... it's gotta be kinda cool for your logo to be chosen as Carrboro's icon, right?