BCR didn't go to last night's Bob Dylan/Willie Nelson/John Mellencamp musicfest at the DBAP, though this American Tobacco tenant certainly got his fair share of crowd-management in trying to get out of the office and to the car. But, hey, that's what downtown's all about, right?

Durham Magazine's DM Blog and Barry Ragin both have their impressions up. One thing in common, it seems: Dylan didn't have it going on last night, though the other artists were pretty sharp, it appears.

I've commented this part of Barry's review because it's an intriguing point -- the things that make Durham a great place to be for its size for culture really do happen in the interstitial spaces where the big crowds sometimes aren't, whether it's tonight's Stamey/Holsapple reunion or the game of croquet being played at lunch on the downtown Woolworth's site.

I'm sure that a lot of Durham's movers and shakers are pointing to last night's show, which brought 11,000 or so people out to the DBAP, patting themselves on the back, and talking about how this reinforces USN&WR's Top Ten label for our town. And hey, if that's the kind of thing that puts stars in your eyes, then, yeah, we've made it.

Tonight, i'll be at Duke Gardens, listening to Peter Holsapple and Chris Stamey perform together in Durham for the first time in ages. I don't know if the dB's ever played a show for more than 2000 people, and there will probably be a tenth that number tonight. Anyone who wants to will get a chance to talk to Peter and Chris after the show. I'll bring a cooler full of dinner and my favorite adult beverages, and enjoy a civilized evening on the lawn with 2 of the artists who made late 20th century rock and roll what it was, and listen to the new music they're making together for the early part of the new century.

Friday night, i'll do the same with Drink Small at the West Village lawn. Don't tell the powers that be in Durham, but that's why Durham is one of the best places to live in this country. It's got nothing to do with who's stopping by on their tours, pulling a million dollars or so out of our pockets.

Not that last Thursday's City Council meeting gave any reason to believe that Greenfire's likelihood of getting $2 million or so in City incentives for their downtown boutique hotel plan was in jeopardy -- as the Herald-Sun noted, the incentives deal seemed generally well-received by Council, though the current economic malaise and the difficulty hospitality projects in specific are seeing in getting financed has raised some eyebrows.

Add one voice to the "pro" column for the deal, however: that of Dick Brezinski, the general manager of downtown's Durham Marriott.

Nortel-Ericsson deal leaves RTP on sidelines -- is it time to fret about the Park's future?

Sad but not surprising news in the Triangle Business Journal yesterday, focusing on the Canadian telecom firm Nortel -- whose once-sprawling RTP operations, down to 2,000 souls from multiples of that in the 1990s, increasingly resembles a socially-awkward eighth-grade boy at his middle school dance, standing alone on the wall, left along with nobody wanting to dance with him.

Not that that should be too much a surprise. Nortel's RTP operations had become largely back-office, the US administrative, finance, customer support and sales shop, with little R&D -- certainly not the R&D jobs in wireless telephony and data that made that chunk of Nortel attractive to the Swedish firm Ericsson.

The cash infusion from the auction keeps those other Nortel businesses not yet spun off alive for now, but the question of Nortel's future, in the Triangle and as a firm in general, continues with a cloud over it.

It's a cloud that some have placed over RTP in general, a park that was designed to attract precisely the Nortels of the world: large corporations seeking a secluded office park where hundreds to thousands could work in a one-company bubble, isolated from those who might try to sneak a peek at trade secrets.

It's a model that worked to draw in companies like IBM and Nortel that integrated everything from R&D and product design to high-tech manufacturing to customer support and sales under the single virtual roof of a corporate entity.

It's a model that supports companies large enough to want major operations centers. And certainly the less-developed Wake County portion of the park has made scores in this way in recent years, drawing significant jobs from Fidelity Investments, Credit Suisse, and IBM's old PC division at Lenovo.

But the world is changing. Fewer companies are vertically integrated in the same way that the giants of a generation or two ago were.

Getting less attention, however, is the fact that RTP has evolved, too, offering more incubator space and housing far more start-up companies than it gets credit for.

Continue reading "Nortel-Ericsson deal leaves RTP on sidelines -- is it time to fret about the Park's future?" »

Nationally, the big news has been the arrest of seven persons in the Triangle region on charges of aiding and abetting overseas terrorism, a case that so far has focused on Wake and Johnston Co. and the Caswell Co. field where training reportedly took place. (N&O, LA Times)

Although we usually tend to set our Bull City baseball sites on the DBAP -- where I was lucky to get to see a come-from-behind win by the Bulls over rival Norfolk last night -- the biggest baseball news this week may just be happening closer to I-40 than I-85.

The reason? Because a South Durham Little League team has made it to the state championship round, an 8-team tournament whose victor will be on the road to Williamsport, Pa. and the Little League World Series next month. 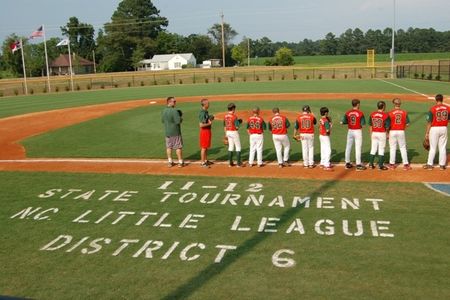 Hit the road, shack -- and don't you come back no more (except to Leigh Farm)

How fitting, after seeing off so many Durham train travelers from its little hovel of a station, that the Bull City should be able to bid adieu to the double-wide as it gets towed down the street? 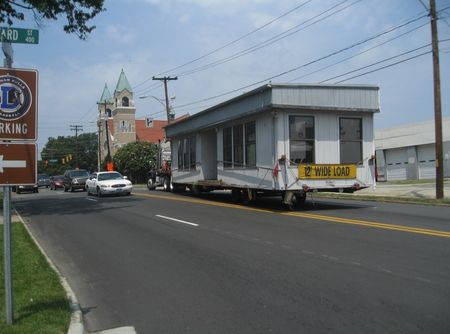 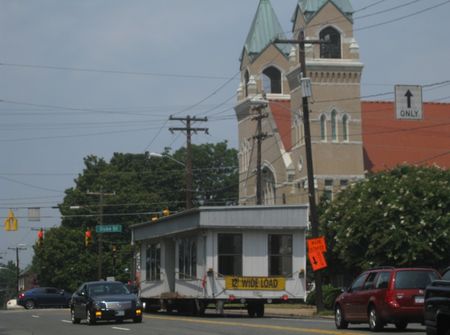 Happily -- for the double-wide and for taxpayers -- the Amshack is finding a new home, as the visitor center at Leigh Farm Park, the South Durham historical/nature park that promises to be that half of the county's counterpart to the Eno River recreation areas.

Hey, a structure with wheelchair-accessible bathrooms isn't anything to sneeze at. Staff began disassembling the Amshack even the very morning of the new West Village-housed Durham Amtrak station's opening.

One way to get some buzz for a new business, it's said, is to stir up some controversy.

If the owners of Cuban Revolution are in fact trying that strategy, one might have to ask if they're succeeding at it too well.

First up, the American Tobacco eatery and Providence, R.I. import was raising some jeers from the local Latino community before its arrival over what some have taken to be a glamorization of Fidel Castro and Che Guevara.

And while owner Ed Morabito has been quick to note his goal in the imagery has been to simply spark conversation and to create a theming -- one that includes portraits of JFK and Marilyn Monroe, too -- it hasn't stopped some Cuban-Americans and their supporters from expressing concern over the theme, in the comments here and in communication directly with the business.

Last week, the restaurant started getting an entirely different buzz... or is that buzzkill? This time, it started coming in from Durham's African-American community.

A rather crazy end to the work week precluded the usual Daily Fishwrap around these parts on Thursday and Friday, but we'll try to make up for it with a wrap-up of the top local news stories over the past few days.

And a busy time it's been. First, Duke took the unprecedented step of closing its East Campus TIP (Talent Identification Program) after an A/H1N1 influenza outbreak; the gym on East had already been closed to try to curb the flu's spread, while the West Campus TIP program for precocious youth remains open at this time. (H-S)

The recycling fracas continued -- at least in influential in-town neighborhoods -- late last week, with Solid Waste director Donald Long noting that contract cart manufacturer Otto had run behind on delivering bins to households and was flying in crews this weekend to wrap up (hopefully) all the deliveries by Monday night. Durham One Call has been swamped by residents with questions in recent days. (H-S)

Meanwhile, Raleigh-based non-profit Builders of Hope has approached the City about a proposal to get municipal help to buy 16 homes in the Cleveland-Holloway neighborhood in order to renovate them and make them available to moderate-income residents. C-H has been at the heart of a flurry of gentrification pressure, creating at times tensions between first-wave in-migrating residents and real estate agents and businesses; the presence of Builders of Hope could help reduce some of the fix-up-and-move-out tendency that neighborhood revitalization can have on poorer residents, and the proposal has won some neighbor support -- though it's by no means clear whether Durham has the $800k available that the successful Raleigh-based group is looking for. (H-S)

Speaking of incentives, Durham's City Council "appeared inclined" to support Greenfire's $2.6m development incentives deal for the Hill Building boutique hotel makeover and the redevelopment of three smaller properties, in spite of some skepticism (notably from CC member Eugene Brown) as to whether the project was viable from a private-sector funding perspective at present. (H-S)