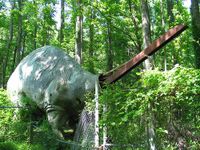 Summertime brings warm weather, back porch sessions with lemonade, festivals aplenty -- and, this year, debate over the punishment meted out to the youth who vandalized the beloved old brontosaurus statue at the Museum of Life & Science near Northgate Park.

I took the seemingly-unpopular view here a few weeks back that revealing the names of the perps wasn't necessary if the Museum felt it was getting whatever sort of restitution was most appropriate -- restitution that, at the time, was known only to include volunteer time for the cash- and manpower-strapped museum.

It's a position others have taken, too, but one which has run into a good question on local listservs and in comments here. The Museum is a partially taxpayer-supported entity, and community donations are being raised to repair the bronto -- why shield those who committed the act if Durham citizens are picking up the tab for the fixes?

Today's N&O has a brief update from Mark Schultz, one that sets out what seems to be a reasonable bifurcation of responsibility for the repair costs:

In an interview Tuesday, [museum VP Julie] Rigby said the museum has received financial restitution to repair the head and neck and the vandals will perform community service.

Additionally, the museum hopes to raise $4,000 to restore the statue, including holes in the mouth that may have been there before the dinosaur's head and neck were cut off in late May.

Chalk this one up as something that makes sense to me.

The bronto statue was a "dinosaur" in more ways than one -- the forty-plus year old fixture had fallen into disrepair well before its marie-antoinetting, and its future had been unknown since it was damaged by a hurricane in the 1990s.

Having the juveniles who (literally) defaced the statue pay for the damage they caused is fair. Looking to the community to help restore the rest of the statue -- a fixture that has more value to local residents and the community, perhaps, than the Museum, which won't be including the old bronto on its new dinosaur trail opening next month -- also seems reasonable.

In a somewhat surprising turn, Rigby notes another reason for keeping the names of the perps out of sight, claiming fears over their safety and noting that "people have made threats," something that seems almost too bizarre to contemplate.

One neighborhood wag noted on a local listserv that the bronto's beheading might have been the best thing that could have happened to restore the statue to its old glory.

This whole story harkens back to the days of when the old condemned Hope Valley elementary school was burned down by some classmates of mine who had been "playing with matches." The culprits had to do a lot of community service, but the school was rebuilt with the insurance money. So what does that mean about the act: hell-bent or heroic?

I guess it's the Durham way... The squeaky wheel gets the grease and the beheaded dino gets err well a whole new body....
It only takes one "tragedy" to pull everyone together.

@Ian -- I think you've got the last half of that wrong.

PS -- are you sure this island is safe? And why'd ya hire that annoying guy NEWMAN to work on the island's computer systems?

This reminds me of the idea that to ensure that heritage and heirloom breeds survive we have to eat them. These youngsters, then, are not to be punished or have their lives threatened, but their names should be known so that we can all celebrate their heroic deeds! One can only wonder what other great but crumbling Durham landmarks these do-gooders can inspire us to save!

The punishment does not fit the crime. These juveniles did $4,000 worth of damage and are getting off with 'community service'. Why are they - or their families - not on the hook to pay restitution?

Considering where the head was fould, they have to have had a car or truck. Sell it and use the money to repair bronto. I don't think a lesson in responsibility has been learned here.

But repair it to what? really? it was barely intac as it was. Does anyone really expect them to pay for the restoration of the thing?

Oh god... Newman... He should have been the first Velociraptor victim.

"The punishment does not fit the crime. These juveniles did $4,000 worth of damage and are getting off with 'community service'. Why are they - or their families - not on the hook to pay restitution?"

@Todd -- If I understand the N&O article right, they **are** paying restitution -- for the head.

They are not being asked to pay restitution for the body. And as TSQ75 says... should they?

I think asking the community to step forward to pay for the NON-head-related repairs to the statue makes sense -- particularly as the statue has little to no value for the Museum any more.

Or am I still missing something here?

The cynic in me still wonders if this was some sort of PR campaign on part of the museum. What better way to bring together the community to offer donations during a cash strapped time to redo the decaying and scientifically date exhibit. But I'm sure this isn't true as it's seem to have had a fair amount of outside investigation.