The Bull City's new Amtrak station -- relocated across the tracks from an old modular unit to a spiffy new 10,000 sq. ft. space inside West Village's Walker Warehouse -- opened on time this morning.

And the two-dozen or so passengers heading out to Charlotte on the morning Piedmont train were greeted to a much-upgraded experience from the station days of old... not to mention a number of media and NCDOT types there to check out the first departure. Below: the train pulls away from Durham Station as passengers' family and local media members watch. It was my first time heading into the station, and there's no denying that the new station is a far more comfortable place to wait for a train than the tired Amshack had been.

As you walk from the train platform to the station's waiting room inside the Walker Warehouse, you're greeted by an overhead covered canopy -- and an attractive sign welcoming you to the Bull City. 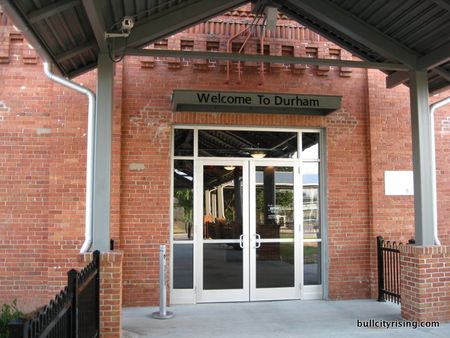 Inside to your left sits the ticketing counter. Self-service Amtrak ticketing and vending machines are located just to the north of the counter, as is an entrance to the rest of the Walker Warehouse. To reach the rest of West Village from the station, you can cut through the northern exit and head towards West End Wine Bar, or exit on the station's east side and walk around. 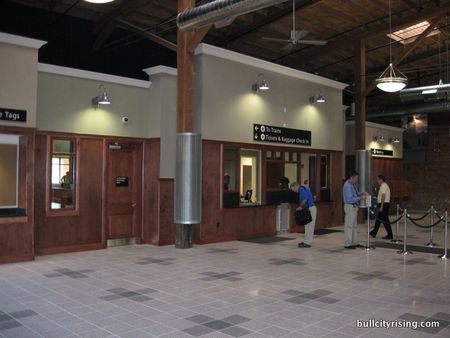 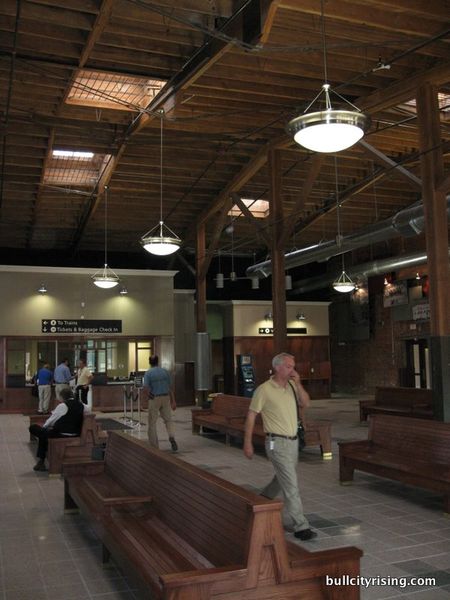 On the north wall of the station are mounted a number of black-and-white portraits of Durham history, from the Piedmont blues that flourished here to a picture of the Duke chapel to the Old Bull building at American Tobacco in its industrial days.

Fittingly, there's also a photo of what Endangered Durham's Gary Kueber has called "the most grievous single-structure architectural loss in Durham history" -- the original Durham Station train depot, lost to history and the wrecking ball. 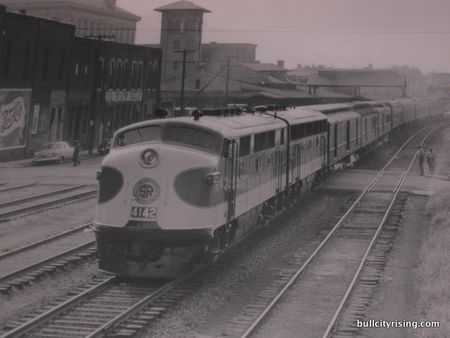 It's really a nice addition to downtown Durham, and helps to make train service within North Carolina and beyond a more attractive option for getting to and from the Bull City. 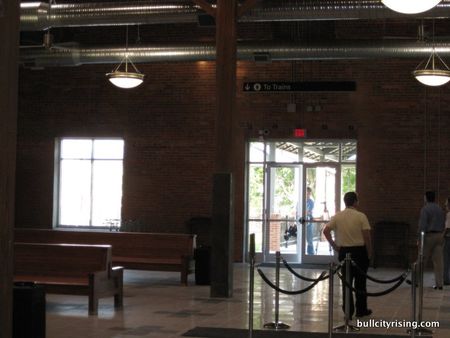 From a pure multimodal perspective, the only nit on the new location remains the separation that now exists between intercity train service and bus service provided at the new Durham Station on Chapel Hill St. and Pettigrew. The eventual presence of transit service at the old Graybar site between the two buildings could someday lead to a planned pedestrian bridge crossing for access to all three. For now, some temporary signage directs passengers from the train station to the bus station, along Main St. and the downtown loop.

One thing that's not sticking around: the old Amshack. Even as the train was pulling out of the station,  crew was already working to take down the structure. I just left the station. It is beautiful! Something Durham can be proud of.

I hope people will come to the Grand Opening Friday afternoon to see for themselves.

And to the AmShak: Ahhhh, see ya!

Now they just need to run a few more trains through the thing and all will be well!

Looks great, and fits in well with the surroundings!

Who and when should we expect vendors and franchisees to show up in and around the new Transit center and the Amtrack station? After having seen the poor hot-dog vendor forced to set up across Pettigrew, one would think our public transit centers more welcoming of private enterprise.

It's already one of the better stations in NC, which it should be. Congrats to Durham on the new digs!