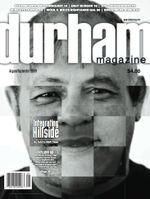 Amidst the usual ebb and flow of stories and articles in traditional publications and new media, two in particular struck me on Thursday as being ironically well-timed given the continuing debate over the proposed new high school in western Durham County.

The organizers of the opposition to the project are holding two tours of the proposed site next week for County leaders and members of the media. And here it just so happens that two different perspectives -- one national and one local, one eco-oriented and the other enmeshed in Durham's dark history of racial prejudice -- seem well-timed to inform the discussion.

The first piece: a blog post from the Natural Resources Defense Council's Kaid Benfield, the director of the NRDC's DC-based smart growth program, who got tipped off by a Durhamite to the proposed 50-acre Duke Forest site for a new high school in the Bull City.

Benfield's conclusion, after a back-and-forth with his correspondent? Nothing more than what many have been saying in the public discourse and the comments, since this whole discussion began: why, precisely, does it take a space one-half the size of the Magic Kingdom to build a high school for less than 2,000 students?

[A]ny example I brought up, old or new, wasn't applicable, in her opinion, to Durham.  What it came down to was that the authorities there really wanted a greenfield property, of around 50 acres or more so they could build, among other things, nine athletic fields on-site.  And R wanted an example of that in a nonsprawling location.  Basically, a sprawl site but somewhere other than in sprawl.

Are you kidding me?  If those are your criteria, you're going to build a large campus of parking lots and one-story buildings in an outlying location.  Those of us who care can't simply accept the authorities' current criteria: we have to muster the facts, examples, advocacy and, ultimately, public will to do things differently, and maybe even to conceive education differently, with being placed inside a community valued for the kids as well as for traffic and the environment.

To hear those who know him tell tale of it, Paul Pope is probably just about the last person in the Triangle who'd want any fuss made over his retirement.

Which makes it all the more important for us here at BCR to tip our hat to this long-time player on the Durham and regional stage -- as one-time general manager of WRAZ Fox 50, and later serving as VP of community relations at Capitol Broadcasting and as GM over the American Tobacco Campus.

Pope, a corporate officer and member of the board of directors at CBC, has spent forty-two years with the broadcasting company that's still maintained its Raleigh family roots. He'll retire from his role at American Tobacco effective at the end of business today.

Not that Pope is likely to fall too far off the radar screen. Word has it that his near-term plans include assuming a trustee's seat for NC Central and helping to lead fund-raising efforts for the Eagles' athletics program -- while continuing along in a special-projects role for CBC.

I'll be the first to admit I do a bad job covering all the great events happening at the Regulator on Ninth Street, but I couldn't let pass a chance to mention the new novel by my neighbor (and one-time Trinity Park traffic calming co-conspirator) Bryan Gilmer, whose newly released book "Felonious Jazz" has a regional theme of sorts to accompany the musical one so obvious from the title.

Gilmer will read from his book tonight at 7pm at the Regulator, accompanied by local jazz group Sawyer-Goldberg.

The jazz theme speaks to the villain in the story, a man looking to commit a record album's worth of felonies -- each crime linked back to a jazz composition, with the antagonist's targets turning into what Gilmer describes as "a twisted critique of life in the suburbs."

Another real estate badmouthing of Durham -- it's time to call our Wake Co. friends on it

It's no secret that there've been mutterings for years about the perceptions of Durham that get painted by our friends and neighbors to the east in Wake County.

After all, studies of regional and national perceptions of Durham performed by the Durham Convention and Visitors' Bureau find that Durhamites quite like it here, and that nationally, Durham has a great reputation... except to the immediate east, where Wake residents have the lowest perception of the Bull City, an image painted by fears of crime and schools.

Those fears can become great cannon fodder in the home-pushing business, as folks relocating to the Triangle hear -- sometimes a whisper, sometimes a roar -- why they shouldn't live in Durham.

It's a notion many of us in Durham would take exception to. But it's a notion that drags on in the minds of many, including some of those in the Wake County real estate business who profit from attracting relocators to their neck of the Triangle.

The Indy looked at this a couple of years back, calling around to real estate agents under the guise of wanting to relocate to the Triangle, and recorded comments that were often hostile to the Bull City.

A local notable passed along the following correspondence to me the other day. At their request I'm keeping all the names involved mum, but it tells an all-too-common tale on what gets said about this city at times.

I had the privilege of sitting next to one of your new [staff at a local event.]  We had a delightful conversation until it turned to her purchase of her home. I am not sure who her real estate broker was, but she bought in Cary which is fine. There is, however, one problem. I asked her if she considered Durham and her response was that her Cary broker told her Durham was not the town for her since it was unsafe, infested with crime and had poor public schools....

I have been battling this stigmatizing of Durham for over 30 years. I thought that with the public acknowledgment of Durham's amazing overall progress, school improvement and reduction of crime that this would be put to rest. But alas, the distortions and mendacities about Durham continue.

Continue reading "Another real estate badmouthing of Durham -- it's time to call our Wake Co. friends on it" »

Turns out the "by early August" date for Lowe's to open up in South Durham at Fayetteville and MLK Jr. Parkway was a literal term.

The H-S reported Wednesday that the home improvement superstore will open at 6 am on Friday, in advance of a grand opening ceremony on August 6.

Gift card purchases made at the store tomorrow (up to $5,000) will be matched by Mooresville, N.C.-based Lowe's towards a donation towards Durham Habitat for Humanity.

This one is strictly from the fanned flames of the rumor mill, folks -- but we've got good reason to believe this particular nugget to be pretty accurate, so I'm running with it.

It's been almost a month since George's Garage left its old site at the corner of Hillsborough Rd. and Ninth St., but the question on most Durhamites' mind has been, just where would serial restaurateur George Bakatsias look to find new digs in the Bull City -- something he promised he'd be doing when he announced the closure of the beloved George's, whose lease had run out?

While there's no confirmation, a BCR source suggests that Bakatsias has, in fact, found his new digs.

If the rumors are right, Bakatsias will be moving closer to downtown; an energetic walker could get there in a good 25-30 minutes or so from the old Ninth Street locale.

By all accounts, it should be a posh place for having dinner or a glass of wine once Bakatsias ends up opening the new site, though we'll all have to stew for a bit barring any official announcement.

We'll report back more when we have fuller details to share since this is, of course, mainly rumors for now. (Assuming some enterprising reader doesn't figure this one out.)

Update: OK, since Michael Bacon picked this one off almost as soon as I published it, something I kind of intended with the puns above:

Rumor has it that Bakatsias has been spotted spending a lot of time in the central bay of West Village's Walker Warehouse, looking at the space slotted between the West End Wine Bar and the new Amtrak station -- and that the space in question has just disappeared off the leasing market, purportedly to become the new home for a restaurant that recently closed. 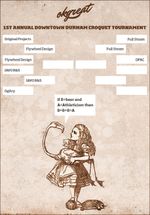 The American Dance Festival has packed up for the season -- its season shortened by one week due to declining philanthropy, WRAL notes, though ticket sales have been up, perhaps due to the presence of the DPAC in the mix? -- but you're not at a loss for downtown summer entertainment just yet.

Downtown's Warehouse Blues series kicked off this past Friday; a partnership between Durham Parks & Rec, the Music Maker Relief Foundation, and West Village, the series brings the blues downtown with summertime Friday concerts from 6-8 pm in a courtyard off Morgan St. at the renovated tobacco factories.

The remaining performances for this summer include: