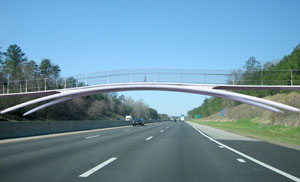 Dwight asked in the comments section at BCR yesterday about the state of the design for the American Tobacco Trail bridge over I-40.

Ask and ye shall receive, dear reader. No sooner had that comment appeared than did longtime bike/ped activist Dan Clever write in with the alert that updated renderings and information on the ATT/I-40 crossing had just been posted to the city's web site.

Steven Grover & Associates from Berkeley, CA -- whose firm led the discussions on bridge concepts during the planning phase for the efforts -- appears on the construction drawings along with engineering firm Parsons Brinckerhoff.

The final design is scheduled to be submitted this summer, with the City looking to advertise for the construction of the bridge -- and the remaining Phase E segment of the ATT that accompanies it, from NC 54 to the Chatham County line -- in December. Construction completion is still pegged for December 2010.

The bridge, a more simplified design than some of the other candidates initially unveiled, will be a steel arch with a Tnemec or similar industrial/architectural coating. A cable overhang at the top and mesh-infill along the sides will provide the walls of the structure.

Meanwhile, "substructure uplights" should provide illumination from below of the structure, while some form of accent lighting is planned for the concrete posts at the abutments on both sides of the interstate highway.

Interestingly, the bridge plans already reference a "future I-40 widened condition" -- suggesting planners and architects are already looking forward to a groanworthy future expansion of the south Durham arterial.

North of I-40, the trail will run along Highgate Dr. before entering undeveloped land and easements along the interstate.

The bridge will provide a crossing roughly in the middle of the Streets of Southpoint property, leading from neighborhoods north of I-40 to a trail that will run along the berm and landscaped area near the north-side edge road of the regional shopping center.

From there, the trail will skirt the edge of the Southpoint property, running past the Sears Auto Center to Renaissance Pkwy, where a signalized pedestrian crossing will be added. After passing west of Kentington Heights, the trail will pass along the north side of the suburban tract Chancellor's Ridge neighborhood, crossing to the east side of Fayetteville Rd. and curving towards Herndon Rd. before crossing south of Scott King Rd. to the Chatham line.

Very exciting news! I like this design. Clean, simply, yet still striking.

Love the news and the bridge!

I'm disappointed in the design. It's a little bland and forgetable to me. It reminds me of PVC pipes. There are many people who travel I-40 every year and the only part of Durham they see is from I-40. It seems our city would try to make a better impression or at least a memorable impression in hopes to attract some of these people back.

I like the design and sure am ready to move to the implementation phase. Durham is great at planning stuff. Getting it done is another thing altogether.

Thanks! We just rode the trail from New Hill to Downtown Durham, and had a great time. The biggest downer was the lengthy detour on busy streets around the 40 break.

Get 'er done! This bridge does not need to be "memorable." Its a bike bridge over a freeway! Anyway- I think its nice looking.

It would be even better if it had that blue streak that you could see on the other bridge on 147.

Oh yeah, I wrote up my recent attempt to ride the entire ATT on Memorial day - Check it out if you are interested:

Hopefully the December 2010 date of completion will hold. This is a vital (and long overdue) project. Will be great when this and the two Chatham County trestle bridge links are finished.

Many thanks to Bill B., The Triangle Rails to Trails Conservancy, and others who for many years, have stayed focused on this project, ensuring a good idea turned into reality.

At this point I could care less as to the design of the bridge as long as it functions. We have been waiting on this bridge for years. Is it a bridge if no one is still living to use it?

So, was the final design submitted? And, is the construction plan on schedule? Just curious because it seems like we voted the bonds for the bridge a long time ago. Was it 2006? Heck, I expect to be retired by the time this thing gets off the ground....

Just checked the City of Durham website to see if there has been any movement on the ATT I-40 bridge construction, and it appears there has been...the timelines have been pushed back yet again!

Completion date is now estimated to be June 2011.

I know that there are people that have been waiting on this missing link to be completed for much longer than I have, but GOOD LORD, this is unbelievable (and yet, totally expected).

We first moved to S. Durham in 2002 and the anticipated completion date at that time was 2005. My children will have gone from tricycles to driving in the interim (and that is if the new timelines are accurate - fat chance). Come on Public Works Dept, get your act together!

At this point we should be getting the other greenway right of ways built and links developed.

Ms. Kalb? City Council? hello hello. Let's make some progress eh? Chatham county was way late to the game and they got their part done before the bridge construction will even start. This does not paint Durham in a good light.

Wow, another reason why it takes forever for Durham to improve on anything...a 10 year plan to end homelessness? But, they can't even build a pedestrian bridge in 10 years, with the land, the design, the companies, and the funding...sheesh?!

No Bridge to Anywhere

The bridge glowing blue light is on now. I think it looks great.

As noted above, the ATT Phase E completion timelines have been pushed out again - now projected for end of 2011. That's 12 months of delays in ... yes, 12 months!

As of last week (May 2011) all permits and approvals have been received, meaning the City can advertise the project for contractors immediately, and open for bids by end of June. Even if all goes according to schedule, we're still looking at 18+ months to completion.

Sounds like progress, but keeping with tradition, the timelines have slipped another 18 months in the past 18 months.