The ABCDDurham listserv has been a-twitter these last couple of weeks with discussions of why festivals like CenterFest and Taste of Durham moved out of the city center (or downtown entirely), moves that organizers say have to do with cost, but which downtown residents and workers say bring character to the CCB Plaza and other core spaces.

Well, there's at least three opportunities this weekend to enjoy some good ol' fashioned fun in the heart of Durham -- one of which is a self-organized music jam and picnic set for Saturday night. 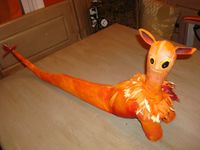 First up: Friday night's Pin Projekt fundraiser, the fifth-annual version of this event, all the proceeds from which benefit Durham's Troika Music Festival. The eponymous pins are bowling pins that local creatives have recreated into "decorative and functional art."

The event starts at 6:30pm with viewing of the pins and cocktails, with the pins being auctioned starting at 8:00pm. Durham's own Cool John Ferguson will bring his brand of blues to the Pinhook starting at 10pm.

A variety of restaurants -- including Amelia, Pop's Backdoor, Chamas, Piazza Italia, Piedmont, Revolution, and Six Plates -- are providing food during the cocktail hour to boot.

A free summertime picnic lunch including staples like hamburgers, hot dogs and ice cream is on tap, as is live music from a variety of bands. A number of community service organizations, from health care and substance abuse to clothing, shelter and clothing options will also be present, both for those thinking of volunteering and those who need help.

And here's a new one: an ad hoc shin-dig in Five Points, part of what one organizer is calling an "'ole fashioned opportunity to DIY our own vibrant downtown nightlife."

Have you ever noticed that there's lovely little plaza between Main and Chapel Hill streets in downtown Durham?  It has trees, tables, and a free wi-fi hot spot but....no people!   Downtown is still basically empty after 5pm, especially in the outdoor spaces.

So this Saturday we're going to turn 5 Points Plaza into.... 5 POINTS PALOOZA!   Please join us from 7 pm on for a good ol' fashioned street party on the plaza.  Bring your laptops, kids, dogs, dinners and your dancing shoes.  My band, the Blue Tailed Skinks, will be playing our upbeat version of old-time string music.   We'd love for other musicians to come out and play as well- as long as you're unplugged.

There are city electrical outlets next to that plaza on the wall adjoining the ninth street bakery lot. I wonder if the public can use them for events such as these for music and so forth?

I am not a lawyer-- but was told that non-amplified events do not need permits-- it is just a gathering of the public in public spaces. If you want to be amplified, then you need to get a permit.