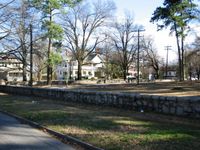 For years, the stone wall around Duke's East Campus has served as a symbol of the occasional conflict between gown and town.

For the former, it's an architectural nicety that surrounds the one-time Trinity College's Georgian buildings designed before the arrival of the newer West Campus.

For the latter -- well, you don't have to be in Durham long to hear the jokes about Duke's desire to find a way to somehow fence itself off from Durham, to make that wall a bit higher. (The fencing-off joke, to my mind, understates by a good measure the university's commitment to a better Durham, something that the Big U doesn't help itself to demonstrate through errors like Maxwell/Sumter.)

Still, the wall touches both worlds, fitting in that its 1916 construction came about "as part of a joint effort by the college and the City of Durham to beautify the neighborhood," according to Duke's archives.

Well, a tenth-of-a-mile stretch of that wall is about to get taken away, but don't look for either town or gown to be particularly thrilled about it.

The culprit is something known as TIP No. B-3638, which in NCDOT jargon-speak means that the state's gonna step outside its North Duke St. Division Five office and build somethin', dang it! And that something would be the replacement for the unimaginatively-named Bridge No. 316, which carries U.S. 70 Business traffic along Main St. over Duke's own Campus Drive.

If you've not spent time on the Duke campus, it's kind of hard to tell that you're going over a bridge in the first place driving along Main St., but there it is, just to the east of the entrance to East Campus. Three bridges -- one for Main St., one for the railroad, and the old Pettigrew St. bridge that neighborhood activists have favored as part of a future renewed pedestrian connection to downtown -- actually cross Campus Drive at this point.

Well, the Main Street bridge has apparently been falling into disrepair for some time, which is where NCDOT comes in. In their best bureaucratic fashion, they've issued a particular document known as (we are not making this up) a "Notice of Intent to Prepare a Memorandum of Agreement," a notice which informs the general public that to build this bridge, a chunk of wall is going to have to go:

Replacing the existing bridge will require the acquision of permanent right-of-way from within the [Trinity College/East Campus of Duke University Historic] district as well as the removal of approximately 500 feet of the historic stone wall that bounds Duke's East Campus.

In discussions between NCDOT and [the State Historic Preservation Office], both parties agreed that as part of the planning of Bridge No. 316's replacement, NCDOT will develop stipulations to mitigate the adverse effects of the bridge replacement project on historic district.... As part of the project, the stone wall will be reconstructed up to the end of the replacement bridge rail. Other protective measures are under consideration.

From this description, it sounds like much of the 500' of removed wall will be gone forever, with NCDOT documenting existing conditions and replacing what of the bridge it can, though apparently only up to the "end of the ... rail" of the replacement bridge.

A fuller description of the project is apparently available in finding of adverse effect documentation required by Federal historic preservation statutes. (East Campus was placed in an historic district by NCDOT, in fact, after a 2000 survey of its architecture.)

That finding document is said by NCDOT to be on-file at the Durham County Library, though staff couldn't locate it there on Sunday. We'll update the matter when there's more news.

The "build the fence higher" isn't just a joke -- Duke resident genius Talman Trask tried to slip something into the UC zoning to allow them to build an eight foot wrought iron fence on top of the wall.

Duke does wonderful things for the community, but when it comes to anything having to do with the interaction between the physical spaces of the city and the university, they oscillate between clueless and tone deaf.

At my Freshman orientation (this was in 2002), some administration official joked that the story behind the fence was that Trinity College trustees wanted a 10 foot wall around campus. JB Duke supposedly thought this was ridiculous but agreed, only to build 7 feet of the wall underground. The NCDOT will have a tough time digging up the wall if that were true...

"you don't have to be in Durham long to hear the jokes about Duke's desire to find a way to somehow fence itself off from Durham, to make that wall a bit higher."

Call me outlier or just plain liar, but I don't think I've ever heard that joke.

It's not a "gothic wonderland" without a high wall or moat. (ha ha) Seriously though, I believe that there would be some town-gown tension even without it.

Is there any indication of project duration and how this will impact traffic, especially campus buses?

That number (500 feet) seems really large. Riding over the bridge today it didn't seem like it could be more than 50 ft wide (on the east campus side anyway).

DOT is not known for its ability to design beautiful structures. This is an extraordinarily sensitive site, and if DOT puts a typical bridge in place it will be ugly as sin. Where we now are largely unaware of the bridge it will be oh so in our faces. We'll get used to it in time but it will be another tear in the fabric of the quality of life here.

On the good news side, the state is broke. The highway trust fund is empty. Road building is more or less at a standstill. There's a new Secretary of Transportation, and Mr. Conti thinks that there are more ways to move people than simply on four rubber tires. Maybe, just maybe, we'll all get lucky and either it will not come to pass OR it'll be more sensitive to the surrounding environment than DOT is predisposed to do...

is it on-line anywhere? or can someone take pics, scan it or such?

Just as Durham residents seized on the replacement of the US 15-501 bridges over New Hope Creek to get a better design (taller and longer to allow pedestrian / wildlife traffic beneath the bridges), this project should be seen as an opportunity to improve the area.

Instead of fretting over the potential impact, what do we want? Old bridges don't last forever. Better bike/ped facilities along with a design suitable for the area would be a good place to start.