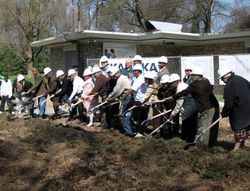 Walltown's park and its resident-built community center were the site this afternoon of a groundbreaking for the new, City-funded recreation center to rise in the historically black neighborhood off Duke's East Campus.

City officials -- including Mayor Bell and almost all the City Council, city manager Tom Bonfield, and Parks & Rec head Rhonda Parker -- turned out for the Saturday afternoon confab, along with dozens of residents from the in-town neighborhood.

The facility will contain an indoor gym with six retractable basketball hoops, locker rooms, and separate teen and senior centers on the first floor. A walking/running track will circle the gym floor on the second level, which will also contain a media room, dance studio, and multipurpose room ideal for community meetings and activities.

The groundbreaking was a celebration of the new municipal investment -- yet also of the history of that existing, modest structure. Walltown's historic community center is a facility whose past is inextricably linked with that of the neighborhood, and whose story informed the community's demand, and decades-long fight, for a Durham-funded replacement.

In recent times, the nearly $9 million project set to begin construction in Walltown has received some scrutiny and criticism, ranging from the building's cost, to the selection of a politically-connected contractor, to changes required to accommodate a possible future aquatic center -- and, ultimately, to the commencement of construction on a facility that didn't appear in Parks & Rec's master plan for recreation centers, while growing neighborhoods nearer Durham's periphery were bypassed in favor of Walltown's rec center.

Saturday's groundbreaking wasn't about that history; to the extent the past came up, it did so largely around the recollections of some of the attendees who participated in the construction of the original rec center in the mid-twentieth century.

Those citizens would likely have been quick to share their stories of Walltown being bypassed by the City for basic services throughout its history, and to talk about the lobbying and pleading required decades ago to have a city incinerator removed from their neighborhood, to make way for a rec center that residents built with their own hands. 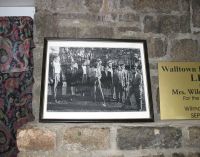 A photo on the fireplace mantle at the original, historic rec center still shows the men and women who participated in the original center's groundbreaking during the dark days of segregation. A few senior citizens attending the groundbreaking stood to be recognized as being among those who actually helped build the facility.

"This day has finally come after years of hard work and not giving up," said Audrey Mitchell, the long-time president of the Walltown Community Association.

Other residents talked in terms of decades, noting a history of neglect of the community's needs dating back to the mid-twentieth century.

Mitchell noted that Walltown most recently began a lobbying effort for a new rec center in 1994, with a kick-off meeting that included a number of now-departed city and county staff -- including George Williams, then the county manager, whose GH Williams Collaborative provided design services for the project. Pointing out that the 1994 meeting covered a range of subjects impacting the revitalization of Walltown, from housing to crime to street lighting, Mitchell emphasized that the rec center provided the last piece of the puzzle for the neighborhood. "We have finally come to this day, which we thought we would never get to, but we are glad that we did."

She thanked supporters from within and outside Walltown -- including allies in Old West Durham and Watts-Hillandale -- for supporting the effort. Mitchell also noted that the current City Council and mayor were the first to be supportive of making the project happen.

Other speakers came back to the stone walls of the building, and the stones laid in the original center's fireplace. The original stone exterior walls of the low-slung one-story building will be incorporated into the much more modern facade of the structure that will replace it. (The existing building will in fact remain, renovated to become offices, a women's locker room and restroom, and a reception desk.) 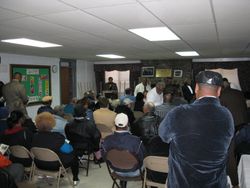 "We will still continue to need your support," Mitchell added -- a reference, perhaps, to the proposed (and also controversial) aquatic center/pool facility, which if built would double the total project cost for a pool despite the presence of the city's Edison Johnson athletic center and pool 1.4 miles away.

A design concepts meeting was recently held by City staff and consultants to understand residents' interest in an aquatic center, which could take on more of a recreational nature than a traditional pool.

Still, given the current economic climate and the city's tight budget, any additional spending on a pool seems a very unlikely event to occur in the foreseeable future.

Ernestine Hooker of Onslow St. was among those who made the point. "As Ms. Johnson just said, we do want the pool, to go with the facility," a call that got applause and calls of support from the assembled crowd of fifty-plus. "So it won't be just for Walltown," she added, referring to other nearby downtown neighborhoods. 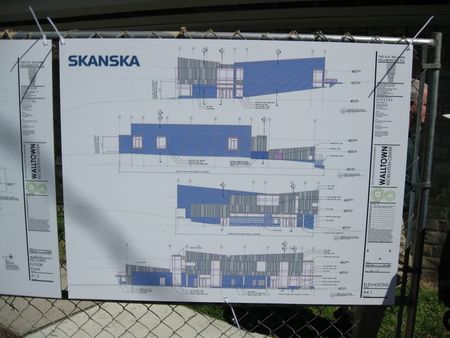