Photo snark o' the week: City says "No Dumping," really means "No Dumping Except Our Dump"

We at BCR took an hour out of a Friday vacation day to trot over to East Durham with City Council's Eugene Brown to check out a few sites of interest.

One of the most concerning on both of our minds: the little matter of the street-paving refuse site over on Juniper St., which garnered quite a bit of attention at last weekend's PAC1 Coffee with Council session.
City Council members Howard Clement and Cora Cole-McFadden berated Public Works director Katie Kalb for the fact that the dumping site -- home to material including gravel, sand, railroad ties and the like pulled up from existing roads during street paving operations -- had been allowed to sit for years across from the Albright Community Garden.

Kalb, who during the exchange was doing her best Apollo Creed impersonation while Cole-McFadden/Clement looked collectively like that 'roid rage Russian boxer from the "Rocky" movie, meekly replied that Public Works had been unable to find a paltry $80-100k in the department's multi-million dollar budget to pay the tipping (disposal) fees for waste on the site.
So it was off to Juniper St. to take a look at the site, which one resident complained last week was in close proximity to the playground at the E.D. Mickle center, allowing dust and dirt to blow in the direction of kids who were just outside trying to play.

Although the activists speaking passionately at the PAC1 meeting were quick to note the irony of the city leaving a dump site in the midst of a neighborhood aimed for revitalization, with a neighborhood center right now, they missed the most delicious, most disgusting part of the irony -- a sign from the heavens that the City hasn't gotten their signs right on this matter.

For your viewing displeasure: what strikes you as ironic about this view on the southern side of Juniper St.: 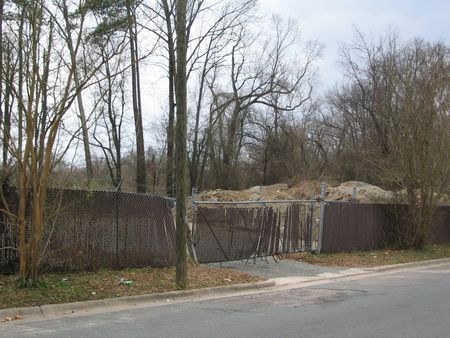 ...being juxtaposed with this sign, sitting dad-gummed across the street from the City's Mini-Me version of the dump? 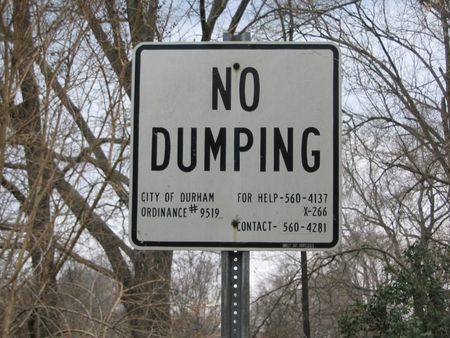 (Out of curiosity, I wonder what would happen if you took the sign literally and called 560-4137, ext. 266, and reported the City of being in violation of City of Durham Ordinance #9519?)

Yes, that's right. Durham tax dollars paid to put up a "No Dumping" sign right across the street from a blight the same City has placed on a neighborhood.

Hey, we wouldn't want citizens dumping trash near our dump! You have to pay good money to dump stuff off with the City. And if you don't have the money to dump your trash, too bad -- unless, er, you happen to be the City itself. Then you just leave your trash in somebody's neighborhood until you have the money.

Not hard to imagine why someone in City Hall must have insisted this "No Dumping" sign go up. After all, a private citizen might decide to follow the Bull City's own example and lead.

And then, of course, who'd clean up the mess?

Councilman Brown pointed out that, by the by, not everything in the dump even lacks value, for instance. 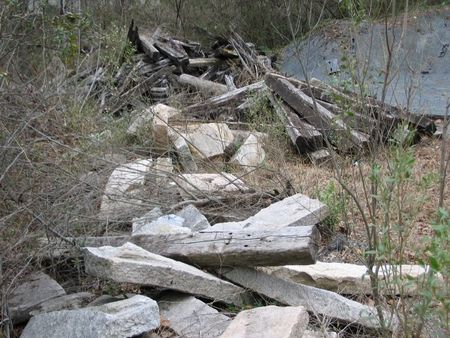 These big blocks in the foreground? They're cut granite, and they've got some significant value to them in the hands of someone who could use them. (A number of older in-town Durham neighborhoods have granite curbs, in fact.) Brown suggested that a number of landscaping companies would be happy to pick these up gratis and re-use them. 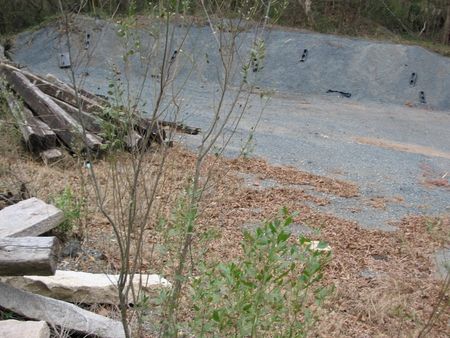 After the display at the PAC1 meeting, one can hope that the administration will find a way to fund an end to this eyesore.

And given that it's an election year, Cole-McFadden and Clement might want to take their own drive over to Juniper St. every now and then to make sure that the City has, in fact, cleaned up the mess.

I'd gladly help find a use for the granite and railroad ties - these should definitely not be trucked to the landfill in VA, and probably not given away for free either. I think it is appropriate for the city to save and stockpile the granite, but hopefully in a more appropriate place.

Too often unfortunately the city labels "waste" that which could actually be pulling in revenue. Another example is all of the city's organic matter which for the past three years has been picked up in trucks labeled "yard waste recycling" and then trucked to the VA landfill.

woah, really that's what happens to the yard waste?

Why can't valuable granite curbing be reused when roadwork is completed? Does anyone think that concrete curbing is more attractive and more durable? What about all of those curved pieces being removed when wheel chair ADA ramps are installed at sidewalk corners? Why can't these curved pieces be used the way they are used at the entrance of my driveway? I had a new concrete apron installed a year or so ago to prevent storm water from coming down my driveway from the street. I had to insist that they reuse the curved curbing that was already there. Otherwise I'm certain I'd have concrete, wasted valuable resources, and detracted from the character of my neighborhood. Geez Katie, please tell us why.

it is my understanding that that is exactly what happens to our yard waste ever since the fire at the city disposal site. it is my recollection that the city doesn't have a permit? Kevin or others, could you shed some light on this situation?

Thanks for posting this information for the public to view. I was one of several dozen persons in attendance at the PAC 1 Coffee with Council a few weekends back. I was glad to see Councilwoman McFadden and Councilman Clement express great concern and even anger in that this matter has persisted for years. However, their outrage is just too little, too late. Councilwoman McFadden stated (and I am paraphrasing), "this is an issue that I raised five years ago." If this is an issue that was raised five years ago, why wasn't the issue raised week-in and week-out over the last five years to ensure that something was done in the matter. It concerns me that as we prepare for this year's municipal elections, we are going to see our elected officials more concerned than ever about issues that have plagued our communities for years.

So that's where the curbs went. When the city put in the median at Oval Park on Club Blvd., the contractor starting selling off the curbs. A bunch of them were hauled off by neighbors before someone got on the city about reusing them. At that point they hauled them off, clearly as an act of appeasement.

Concrete curbs are not more beautiful, just a lot cheaper to install. One more little diminishment of the character of the city...

So, if I see granite being pulled up for some project, I should stop and ask for it? It would look great as a border for a bed or patio of some sort.

You can see a great example of re use of the city's old granite curbstones along W.Chapel Hill St.

When a buddy of mine was hired to design some modest streetscape improvements along that stretch back in the 90's, I suggested using the curbs for steps and raised flower beds.

Duke Gardens has also reused the curbs from streets that the city closed for Central Campus. You can see them employed as paths, steps and bridges in the Asian Arboretum.