Saturday's Partners Against Crime-District 1 meeting doubled as a Coffee with Council feedback session, part of City Council's annual outreach to citizens during the budget-setting period.

And Council members certainly walked away with an earful of feedback from PAC1 -- particularly from a number of well-connected or activist PAC1 members, including the Rev. Mel Whitley, Vivian McCoy, and others who've been long-time advocates for improvements in East Durham's built environment, crime levels and safety, and economic opportunity.

Reserved for specific criticism were two focal points for complaints. One, the paving of Harvard Ave., stirs up a controversy that's been in the papers frequently in recent weeks; the other, the presence of an inexplicable storage area for road paving materials, seems likely to draw sympathetic frustration at the City's apparent utter failure to solve a fairly simple issue.

The readers have spoken, and the Fishwrap is back. (Thanks to those who wrote in or commented to note that it's of use to them.) Glad to see it's popular -- and it'll be staying in here at BCR.

Here's the top stories from this weekend and this morning in Bull City news:

The grand opening for the new Durham Station multimodal center isn't set to take place until Monday morning -- a press conference and fancy-shmancy ribbon cutting is scheduled for 11am.

But DATA buses rolled in for the first time this morning, and the new Durham Station saw its initial set of passengers. We stopped by for some photos and to see how things went with the first morning at the new transit center. 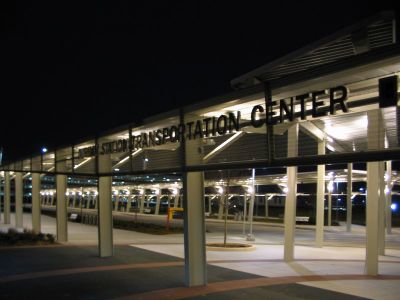 One of the reasons for having an early shakedown of a new facility before the oversized scissors and ribbons come out is to be sure all the kinks are worked out. A small wrinkle or two aside, though, Durham Station came to life with little fanfare and less trouble. 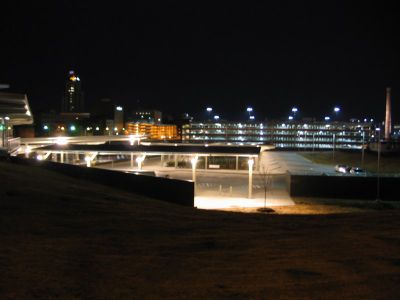 Downtown's Vivian to morph into "Avenue of the Arts?" 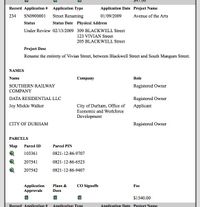 Lots of streets have changed over the years in the Bull City's downtown, as our friend Gary likes to point out over at Endangered Durham. Tatum is gone, now part of roughly the first base line at the DBAP; so too Matthews, that ran along the ballpark's concourse. Cora, South and Popular all disappeared north of the Freeway to boot. Others simply changed name: McMannen to Mangum, Pine to Roxboro.
And another name appears destined to be changed, wiped off the figurative map: Vivian St.

According to a permit filed with the City by, er, the City itself last month, Vivian St. is apparently going to be changing its name to -- are you sitting down? -- the "Avenue of the Arts."

As the excerpt from Durham's helpful online land development system shows, Joy Mickle-Walker of the City's Office of Economic and Workforce Development filed an application to make the change on January 9.

Continue reading "Downtown's Vivian to morph into "Avenue of the Arts?"" »

Besides the brief updates below, we're putting the Fishwrap on hiatus for a few days, to focus scarcer-than-usual blogging time on original reporting while we catch up with other life commitments. Look for its full-fledged return likely in the near future.

Though, in the interim, I'd welcome your feedback in the Comments section: is the Fishwrap useful? A helpful wrap-up of news? Or stuff you're surfing the H-S and other publications to read anyway?

Today's Herald-Sun mostly features stories we've talked about here at BCR this week, but some updates on them:

Same great Durham water, now with less ammonia! (For a while.)

From your friends at the Bull City's Department of Taste-Two-Oh: Don't worry, your water's fine. It's going to taste a little funny, and smell a little funny. That's the chlorine, but have no fear, it's only temporary, while they cut down on the amount of ammonia used to balance it out.

Great! Er, I think. Have no fear, it's ammonia as usual on, appropriately, April Fool's Day.

From Friday, February 27 through April 1, 2009, the City of Durham will temporarily stop adding ammonia during the water treatment disinfection process as required annually by state and federal water regulations.

During this one-month timeframe, only chlorine will be used for disinfection.  The City’s Water and Sewer Maintenance crews will also be flushing the entire water system to disperse chlorine throughout the system.

During March, residents may notice an increase in the chlorine taste and odor as well as minor discoloration in their water when crews are working in their neighborhoods.  Fish aquarium and pond owners as well as citizens receiving kidney dialysis treatment should continue to take special precaution to remove traces of ammonia and chlorine from the water prior to using it.  Residents should also check their water before washing any white clothing.  If water discoloration occurs, citizens should run their water for a few minutes until it runs clear.  If the discoloration persists, contact the Water and Sewer Maintenance Division of the City’s Department of Water Management at (919) 560-4344.

Update: There's more floating around listservs and inboxes on this story:

"DPS continues to search for a new high school site in western Durham to relieve overcrowding at Riverside and Jordan High Schools.  Many sites have been considered, and several of them offer better solutions than others.  At this time, however, no conclusion has been reached, nor are any contracts in place.  Based on the need for this new high school, finding a property solution is a high priority."

We all know Riverside High takes its name from the Eno River, while the unimaginatively-named Northern and Southern reflect, well, their geographic locales within the old county system.

And while the sign might make you think Jordan High is named for one Mr. Charles E. Jordan, we conspiracy types at BCR don't buy it -- we totally think Wib Gulley lost a bet to the Chapel Hill mayor back in the early 80s and had to rename the school after His Airness in Carolina Blue.

But if the rumor mill is right, the newest high school under consideration for Durham County might need to name itself "Forest High" -- maybe a nice suburban name like "Olde Piney Woods High School," even?

A BCR reader reports that the site of a future high school is the buzz of some west Durham neighborhoods, with perhaps as many as twenty locations in the area between Jordan and Riverside under consideration for Durham's next high school, and with a number of potential sites in and around Duke Forest specifically being scrutinized.

The fate of public access programming in the Bull City has been up in the air for some time, with changes to state law opening the door for Time Warner to close off production facilities and broadcasting facilities to public access with the current Channel 8 becoming a full-time government and public affairs channel.

Local officials secured an extension with TWC while alternative arrangements were being negotiated, with the ultimate goal being to secure a full-time public access channel to complement Channel 8 and DPS' school programming on Channel 4.

Now comes word from the Durham Committee for Community Media that Orange County non-profit The Peoples Channel has, with a representative from the Community Reinvestment Association of NC, gotten Durham County to authorize the transfer of $55,000 to The Peoples Channel to take over a contractor role in managing public access. City manager Tom Bonfield is similarly recommending approval of the arrangement.

Both the city and county had budgeted funds for public access that were to be paid to Time Warner, which opted not to collect the money during the negotiated extension period for services. Instead, those funds will now support a new public access operation at 110 E. Geer St., the recently-restored building owned by CRA-NC, and which already has video production capabilities on-site.

Council to muse over non-partisan plurality election proposal; who are the likely winners, losers?

The proposal to change Durham's municipal election method from a primary-based system to a non-partisan plurality -- saving potentially $180,000 or more this year -- isn't on the formal docket for Thursday's work session, but BCR has learned it's expected to be raised as a priority item by city attorney Patrick Baker.

Board of Elections chief Mike Ashe will be on hand to answer questions; at least one Council member has expressed some cautious interest, though noting "a number of questions about the impact on voters and candidates alike," as Mike Woodard put it to Council in an email two weeks back.

Elections officials have stressed from the beginning that the plan is being introduced without any regard to its possible impact on the outcomes of this fall's election, with Ashe famously quipping earlier this month that all matter of voting methods have produced great leaders and terrible leaders.

That said, it's interesting sometimes to speculate -- and, hey, that's one of the plus sides of a blog. So just what impact could a non-partisan plurality system have on the election?

The most likely impact would appear to be signaled by last spring's school board at-large seat primary; the seat's county-wide precinct differs from the four racially-tilted districts and two also-racially-oriented superdistricts that fill the other six seats on Council.

Continue reading "Council to muse over non-partisan plurality election proposal; who are the likely winners, losers?" »

Bad news for Durham's arts scene: groundbreaking exhibition space the Branch Gallery has announced that it will be closing at the end of February -- an acceleration from an already-under-discussion fall 2009 closing.

The downtown space on Foster St. next to Piedmont restaurant has hosted the Carrboro-founded gallery since 2006; the product of two RISD graduates, Branch Gallery was self-described as "a laboratory for the arts in the Southeast, organizing a wide range of group and solo exhibitions in collaboration with artists who are recognized locally, nationally, and internationally."

The Indy's Triangulator blog has the scoop.