Here's today's tops of the press. And be sure to tune in tonight for a chance to get updates on a couple of news items around town, as Downtown Durham Inc.'s Bill Kalkhof and Melissa Norton join Barry and me on "Shooting the Bull" (7:30pm, WXDU 88.7 FM or wxdu.org) to talk about stormwater regulations and the debate over the future of the dedicated one cent to downtown revitalization.

Wafting's end: more on the insurance issue, and Council rumbles

The fallout's still falling from Monday's announcement that Dave Owen would be ending his Eno River wafting program, launched from the city-owned West Point Park on the Eno, after almost twenty years of offering the tours -- the last year of which having seen Owen playing a key and very public role in advocating for the park's transfer to the state park system.

In a brief interview on Wednesday, Durham Parks & Rec chief Rhonda Parker told BCR that DPR wasn't looking to single the wafting program out, but was instead asking them to meet the same liability requirements as other contractor programs.

According to published reports and Owen's own statement released Monday, Owen could have purchased liability insurance, or could have had all his participants sign standard-issue liability waiver forms and submit them to DPR. (Owen chose this path in 1995, but says he was told by a then-DPR official that he could skip that; returning to signed liability waivers, Owen says, "is unthinkable without an office where paperwork can be properly handled."

Parker told BCR that the provision of this insurance is something all programs are being asked to do. "It's a program that we do value in he park, but we do have to have insurance coverage," Parker said. "We do have oher partners -- the Schoolhouse of Wonder, and various other groups -- that are providng services in the park, and we're requiring them to have insurance," she added.

The challenge of regional planning: Next verse, same as the first?

I had the interesting opportunity yesterday morning to travel eastward to the Raleigh Convention Center as one of three hundred area residents chosen to participate in the Urban Land Institute's Triangle-area Reality Check exercise.

The project? Reality Check divided us up into groups seated at one of thirty 30 tables, each table containing Lego blocks we were to place on a regional map to signify where we wanted new units of housing and new jobs to be placed. The housing and employment units at each table together represented 1.2 million new residents and 700,000 new jobs -- the amounts by which the Triangle is projected to grow between now and 2030.

The participants and sponsors represented a wide range of Triangle leaders -- from local elected officials to corporate leaders to the non-profit and governmental sector. Oh, and the occasional irascible blogger (who owes a thank-you to Michael Lemanski of Greenfire for the nomination to participate.)

At our orientation session a few weeks ago, we all had the chance to take a glimpse at one of these Lego tables representing what today's Triangle looks like. And if you've ever wondered why we suffer so much from traffic and road congestion, and long commutes, and fights over development -- well, this photo shows you one reason why. (Click to view full size.) 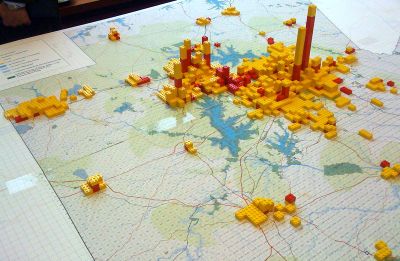 Those red blocks denote where the jobs are -- 1,900 jobs per red brick. And as the map shows, we've built big job bases in downtown Raleigh, downtown Durham, and at Duke and UNC. And, of course, in RTP.

In the urban cores of Durham and Raleigh, we've also built a significant level of density, as denoted by the yellow blocks -- each of which represents 1,500 people. (Each block covers a one sq. mi. area.)

Yet we also find ourselves "stepping down" the closer we get to RTP. Western Cary and the rest of the fast-growing, upscale western part of Wake Co. has one yellow block in many cases; that translates to about one household per acre.

And of course, there's nothing to speak of in the way of jobs in these areas. Same for bedroom communities like Mebane. In short, we've got people, and we've got jobs -- but rarely do we have both in the same place.

Continue reading "The challenge of regional planning: Next verse, same as the first?" »

Riverdave's Eno "wafting" comes to an end after disagreement with City

Dave Owen announced Monday in a letter to Durham's Parks & Rec department that he'd be ending his almost two decades of offering "wafting" tours of the Eno River launched through the city's West Point Park on the Eno facilities.

Owen, together with partner Josie McNeil, has been an active voice in the debate over the future of the city-managed park; together, they've been central to the debate over a possible transfer of the park to state parks system as a way of preserving an ecologically-sensitive tract adjacent to the park. Owen has also spoken out at times over the state of the city park's management.

In Owen's letter to the City (which is posted on his program's web site), it's the city's management decisions around the park -- specifically as it relates to the wafting service he's offered, which reportedly drew as many as 2,000 participants a year -- that led to his decision to discontinue the service.

We at BCR attempted to reach Parks & Rec staff late on Tuesday afternoon but were unable to get comment from them in advance of publication.

More on the stormwater tempest in a bioretention teapot

Last week's passionate debate over the proposed stormwater regulation changes brought out a tropical depression's worth of controversy, particularly from the development community, which predicted suburban sprawl and reduced sizes of transit-oriented developments as a result of the requirement that Durham's "donut hole" -- a segment running from downtown to the Chatham Co. line -- that has lacked stormwater control regulations through what appears to be accidental oversight.

Even the Herald-Sun got in the act with this Sunday's editorial:

Controlling run-off isn't just a good idea -- it's state law, and the city could face a hefty $25,000-a-day fine if it doesn't have rules in place to satisfy the state by April.

But the conventional practice for controlling runoff is to install retention ponds or other land-hungry devices. That strategy works well in suburban developments where land is plentiful and undeveloped.

Infilling or redeveloping urban environments to build high-density apartments or condos, though, presents a different challenge. And developer representatives urged the council to hold off on adopting rules that would have hampered the very development it has been encouraging downtown.... An option is to let developers help local governments acquire environmentally threatened areas elsewhere to offset the impact of new building where conventional run-off retention is impossible.

We've learned a few more things about the issue, particularly from stakeholders at Downtown Durham, Inc., which has advocated for a compromise solution to help the City avoid facing hefty fines for non-compliance while not discouraging investment in density, particularly downtown.

Continue reading "More on the stormwater tempest in a bioretention teapot" »

It's a big day in local news, with lots happening in the sausage factory of local government:

Speaking of downtown and transit, one more part of the city's transportation infrastructure is coming together, with work proceeding well on the replacement for the much-derided Amshack temporary station for inter-city train traffic. 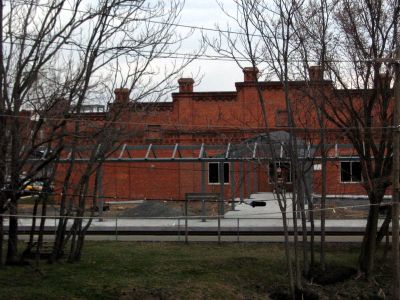 Last year -- after much hemming and hawing -- NCDOT agreed to lease space in West Village's Walker Warehouse for a permanent station for the Bull City, replacing the unsightly modular trailer that's served as the station's home since the 1990s.

Ironically, the Amshack was built around the same time that the old DATA station on the downtown loop added the brick-and-glass waiting and ticketing area to the gazebo that provided a modicum of shelter for bus passengers.

The new Amtrak station is expected to open in a few months. Of course, the future of the old Amshack site and the buildings to its north and west await a future for transit in the Bull City and the region; long planned as the downtown TTA site, and with a pedestrian bridge linkage to the Durham Station multimodal center waiting to be built upon the arrival of a rail-based transit system, it remains the missing piece in the region's transit infrastructure.

On a week in which we learned of bad news for one Scientific Properties arts-related tenant (the closing of Branch Gallery on Foster St.), we're hearing now good news, in turn: the arrival of the first retail tenant at Golden Belt.

The developer has announced that the arts-themed historic adaptive reuse project in East Durham will be adding LabourLove Gallery to its stable this summer at Golden Belt, bringing a retail gallery to the eastern side of the complex's lobby (the artist studios and apartment side.)

LabourLove, which will launch its business online concurrently with its gallery opening, is the brainchild of Hillsborough's Kelly Dew and John Pelphrey, and will sell prints as well as "derivative works" including bags, clothing, home accessories and the like -- all in limited quantities, and viewable with the original art work in the gallery.

The firm will also offer art rental, art lessons for children, and art selection services to include in-home consultations and installations.

According to the Scientific Properties press release:

[Dew and Pelphrey] founded LLG on the premise that fine art is intended for general consumption regardless of race, religion, level of education or economic status.  Dew explains their mission, “We aim to create an environment that expands the public’s perception of art retail by displaying original art from young, talented artists along with limited edition prints and products inspired by their original work. ”  The prints and derivative works such as clothing, bags and home accessories will be produced in limited quantities and displayed along with the original art work in the gallery.

After establishing relationships with local elementary schools, Dew and Pelphrey also hope to engage the community in the success of the gallery by holding quarterly art openings for local elementary students.  The public art openings will recognize the outstanding art achievements of the students and the proceeds from the sale of the children’s work will be donated back to the participating school’s art fund.

In anticipation of the gallery’s opening, Pelphrey says, “We love the Golden Belt project.  Kelly and I are excited to open LabourLove and begin dispelling the myth that understanding and appreciating art is reserved only for those with formal art training or elite social status.”