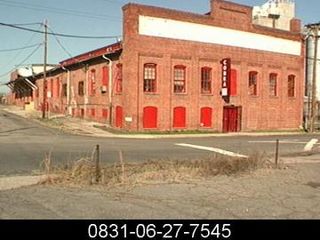 Scientific Properties isn't the only developer bringing an East Durham proposal before the City Council today. In a second item, Lewis & Clark Community Developers propose the use of almost $200,000 in City-managed Community Development Block Grant (CDBG) funding to support the renovation of an abandoned old industrial building as office space for small businesses.

In the case of Lewis & Clark, the firm's name might seem to recognize the pioneering nature of East Durham investment, though the appellation may be more of a happy coincidence. It refers to principals Chuck Lewis, a developer/general contractor in the area for a quarter-century, and Wendy Clark, entrepreneur and owner of a local cleaning company.

The two formed an LLC late last year and purchased the abandoned structure at 801 Gilbert St. in North-East Central Durham, near TROSA facilities and Durham's Food Bank. According to the developers' web site:

801 Gilbert was built around 1917 as a hosiery mill and purchased in 1919 by Julian Carr, Durham tobacco and hosiery baron. He named the building for his "right-hand man" (and former Carr family slave) John O'Daniel. O'Daniel was one of the earliest African-American landowners in Hayti and he contributed to the building of St. Joseph's Church there. He likely handled for Carr the recruitment and hiring of African-American mill employees, a very rare practice at the time.

After Carr's death, the building became The Farmers' Exchange, a farmers' cooperative that had 900 members by 1935. Small business thrived there in the form of "curb markets," where primarily women sold "poultry, eggs, baked and pickled goods, fresh flowers and vegetables." The site later became a poultry processing plant, and a feed mill built just behind the site later became Southern States mill, still in operation. Financial statements from 1955 and 1956 that were found in the building show it was a significant place of commerce for the city. The Farmers' Exchange appears to have shut down in the early 1980's. During the 1990's, "Cobra," a Hispanic nightclub operated in the building. The site has had little to no commercial activity since then.

The developers envision renovating the structure to become the John O'Daniel Business Center, a structure with small-office space ranging between 180 and 430 sq. ft. for between $295 and $595/month rent. The spaces would feature wireless Internet and access to a shared business services area, including copy, fax and mail services. A meeting room capable of seating 90 would be available on the upper floor of the structure.

It's an aggressive and optimistic plan for bringing commercial office space back to East Durham in a small-office, incubator-like environment. The proposed lease rates are actually in line with Class B rates in the central business district, on a PSF basis of $16-19/year, though lessees get some business services and infrastructure built in that they'd otherwise need to pay for.

Clark's cleaning business will be an anchor tenant in the building -- and she herself is a homeowner in North East Central Durham, as she notes in sharing her thoughts on community building over at the DurhamCares web site.

From the City, the development team seeks public funding of $177,000 -- equivalent to the sum of the GC fee and general conditions estimate, though whether intentional or accidental, we know not -- via the Community Development Block Grant funding made available from the Federal government. As with the funding for Joseph Bushfan to open a restaurant, grocery store and cafe at Angier & Driver, these funds are intended to support the acquisition, improvement, and economic development on blighted properties.

And there's little question the structure is blighted: it's sat vacant for years and, aside from a new roof's addition in 2003, is in rough shape interior, based on the photos in the City's memo.