With the holidays taking Durhamites out of their usual routines this week, many of us may have missed seeing this week's issue of the Independent Weekly newspaper.

Worth calling out, therefore, our friend and fellow Bull City blogger Gary Kueber, who was named one of the winners of the Independent Weekly's 2008 Citizen Awards. The honor, which has been given to a handful of citizens or organizations each year since 1983, recognizes Kueber for his extraordinary work calling attention to the too-often-lost architecture in the Bull City.

Gary's done an absolutely tremendous job with "Endangered Durham," a real treasure for Durham -- and one that Durhamites fifty years from now, I suspect, will look back on itself to see what this city looked like at the dawn of the 21st century, peering at Gary's modern-day photos with a curiosity, intensity and sense of wonder akin to that which we give the sometimes hundred-year-old photos and maps that Gary documents on his blog.

One can only hope that, generations from now, they can look back on Gary's work and have difficulty comprehending it; for that would mean that Durham's penchant for tearing yesterday down to build a bland tomorrow had been replaced with a greater sense of wonder and admiration for our built history.

That so many of us are even aware of preservation in Durham is a tribute to Endangered Durham, which in the Internet era can reach folks with an immediacy and reach that even the best non-profits (and I count Preservation Durham in theat number) are hard-pressed to do.

Congrats on the good work, Gary, and keep it up -- I for one love reading your site each day.

(We'd be remiss if we didn't also mention Amanda Arrington, who also won the Indy honor for her work on the issue of dog chaining in Durham.)

Shooting the Bull: Podcast for November 20 and 27

We're catching up on this holiday weekend with the two most recent podcasts for "Shooting the Bull," the weekly news/talk/community program co-hosted by yours truly and Barry Ragin from the Dependable Erection blog.

On our November 20 show, Barry and I talk with Phil Marsosudiro, author of "The Archer Pelican" blog and a long-time Durham resident. Barry and I chat with Phil about his recent travels around the country and the world and about why and how he keeps coming back to the Bull City.

On our November 27 program, Barry interviews Peter Donlon, program director at the Urban Ministries of Durham, in a program that looks at an organization making a difference on America's Thanksgiving holiday.


Here's hoping everyone has a terrific end to the holiday weekend.

We talked here last week about the Hillside-Southern showdown between one of Durham's best hometown rivalries -- a contest that Hillside won in front of fans at Durham County Stadium.

This week, Hillside moves on to face Southeast Raleigh High School. And though Southeast Raleigh is a new institution, just a decade old, to Durham educator (and recent state schools superintendent candidate) Eddie Davis, it brings back memories of an old rivalry dating to the days of segregated schools, before Raleigh's all-black Ligon became a middle school in the post-civil rights era:

Before full-scale integration, the Hillside "Hornets" and the Ligon "Little Blues" were among the elite black high school athletic programs in the state of North Carolina. If the state championship was not won by one of these schools, the eventual champ most likely had to defeat one of these giants....

Although the Southeast Raleigh "Bulldogs" football team is not a "direct" successor to Ligon, it is still an integral part of Raleigh's vibrant African-American community.

So, for the victorious team on Friday night, this game will allow the current student/athletes the opportunity to advance to the Eastern 4-A championship game. It will also provide a chance to rekindle the memories of the legacy of the old Ligon and Hillside rivalry for lots of "old-school fans."

See more over at Eddie's new blog. Meanwhile, Hillside travels to the City of Oaks tonight for the third round playoff matchup.

The online protest against Adam & Eve opening an adult-themed store near the Streets of Southpoint continues to draw more signatures, with the N&O now following up with a new story on the matter.

Elected officials have noted that they are powerless to block this retail business, which can operate by right at the location at the corner of NC 54 and Fayetteville.

An Adam & Eve shop is currently located right near the old South Square mall along 15-501 and will relocate to this new site when open. Such mall-district locations seem like nothing new for the Hillsborough based retail and catalog firm, whose Raleigh store is located just up the street from the Crabtree Valley Mall in a respectable restaurant and retail district of the city.

The comments in the online petition -- whose first signer was noted South Durham advocate Melissa Rooney -- describe the area surrounding the proposed site as a "family and church area;" some suggest the store should be banned anywhere in the Bull City, while others say that the store should simply find another, less family-oriented part of the city to operate in.

The H-S and N&O reported yesterday that a spin-off of Motricity is staying in Durham, and in the American Tobacco Campus to boot -- and appears to be the first tenant to move into the Power House building under renovation in the center of the campus.

PocketGear is a successor to PalmGear, one of the early 1990s PDA software sites, brought into Motricity by its president/CEO Ryan Wuerch. Motricity co-founder and one-time CTO Jud Bowman bought PocketGear out from Motricity this summer, due in part to his lack of interest in moving to Motricity's new Pacific Northwest headquarters, and in part to a desire to build another company from the ground up.

The firm works to develop software applications for popular mobile smartphone and PDA platforms, a potentially lucrative market given the widespread growth of these devices.

The papers note that PocketGear staff are set to move next week into the Power House at American Tobacco, the last building in the original Ambacco set to be renovated; the first floor is set to house Ben Benson's steakhouse and a smaller, lower-priced grill, while PocketGear will be moving into the fourth floor.

Contractors for fire, electrical, plumbing and other trades have been pulling building permits for the Power House generally and Ben Benson's specifically for much of the year, with fourth floor tenant upfit permits being pulled since early October, presumably for PocketGear.

The firm is expected to bring almost 20 employees from Motricity's to-be-vacated space in the north end of American Tobacco to the new digs.

The turkey doesn't get here until tomorrow, but the fish are served here daily. Well, weekdaily at least. Excepting holidays, natch.

Public art, yours for the taking (note: bring forklift)

The area around the DPAC is getting wrapped up in preparation for Sunday's B.B. King opening performance. As of this morning, the sod is in place on what's being called "Diamond View Park" -- the proposed future home of more apartments/condos, though Capitol Broadcasting appears to be waiting for the scene to improve where real estate's concerned.

Similarly, the reopening of Vivian St. seems steps away, with the last strip of road on the verge of getting asphalt down, the sidewalks having been poured in the last week or so. And the decorative banners are up surrounding the exposed concrete sides of the East Deck; future wrapper residential buildings should help the aesthetics there, one of these days.

All of this leads up to Monday night's grand opening, which starts at 5:30 p.m., with live entertainment and self-guided tours of the less-than-$50-million theater. (The H-S and N&O have the lowdown on the December 1 fun.)

As part of the opening, the much-discussed Jaume Plensa "Sleep No More" light sculpture will be powering up at 6 p.m. Assuming, of course, it hasn't been swiped by then: 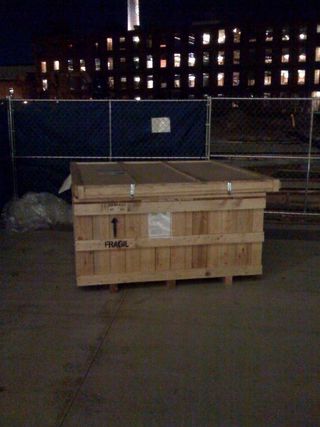 Can somebody please help Joe Bowser with his leaky toilet?

This weekend's best entertainment value came, as it so often does, from the column inches that comprise the Herald-Sun's letters to the editor section.

And no, I'm not talking about the poor high school senior whining about having a five-to-twelve page paper ("When will the torture stop? and Are you enjoying our suffering?" he asks). No, I'm talking about the letter complaining about Durham's unfair, unreasonable water rates:

I complained recently in this forum about the jump in my water bill from $83 to $132. Well, I paid my most recent bill and it jumped to $142. I guess the powers to be in this city let you know in no uncertain terms that you do not complain about actions they take -- no matter how it impacts you. They say just send your money downtown when I say so.

Those people in power! Those downtown scum, sucking your wallets dry! Just who is the populist who will stand up for the hard-working men and women of Durham?

Why, no less than your faithful correspondent, one Joe Bowser -- County Commissioner-elect, and as we discussed last week, pretender to the chairmanship of the BOCC.

The first thing I began to wonder when I read this was, can somebody please get a plumber over to Bowserville down on Druid Place and stop his toilet from leaking?

Continue reading "Can somebody please help Joe Bowser with his leaky toilet?" »

Not much in the funny papers this morning; we here at BCR actually dropped a whole 50 cents on a print Herald-Sun this morning, thinking the web site was missing stories.