Plensa/DPAC/Goodmon: It's a go (if City Council says so)

Looks like our report last week on the Jaume Plensa exhibit was on the mark. There's now more confirmation, in the form of an agenda item on this week's City Council work session docket.

Turns out that the Plensa public art piece, as we speculated last week, is in fact a donation from Capitol Broadcasting Company, whose scion Jim Goodmon is a big Plensa fan whose attempt to give a $2.5 million work by the Spanish artist to Raleigh met with opposition from civic leaders. The $100,000-plus construction cost we looked at last week -- plus the cost to commission, design and install the work -- would be borne by CBC.

And what, precisely, is the work? A "sculpted disc" inscribed with a quotation from Shakespeare, and from which a "vertical light beam" would rise into the heavens: 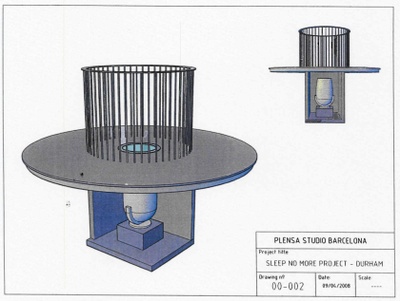 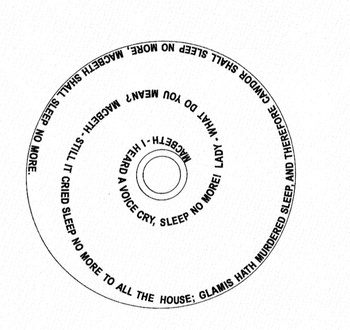 The sculpture is proposed to be installed at the northwest corner of the DPAC plaza, near where the HVAC air handlers are installed.

The City would be able to operate the light on a schedule of its choosing, but with one key caveat: the 7,000 watt light would have to be operated at least during the nights of scheduled DPAC performances.

An operating schedule is important for at least one reason: the City of Durham would need to keep our friends over at RDU briefed about just when the artwork would be active, lest some triple-7 straight outta Heathrow try to land on the Downtown Loop:

The Federal Aviation Administration has been consulted and has provided an advisory that the Raleigh-Durham International Airport control tower should be notified when the light beam is turned on, either through a written schedule sent to the tower by email or fax, or through a telephone call to the tower 2 hours prior to the beam being turned on in the case of a variation from the written schedule.

Capitol Broadcasting would pick up all the installation and commissioning costs for the work, with the annual electrical bill expense for the installation -- a cost that could run as much as $3,400 per year -- being absorbed by the Durham Performing Arts Center's budget.

Meanwhile, the ongoing maintenance and upkeep of the artwork would be paid by the City, a cost that is estimated to cost between $4,500 and $6,500 through most of the estimated 25 year life of the work.

One can only imagine how much fun it is to try to work a project like this through the layers of a local government bureaucracy (and, after all, who else could come up with sentences like these, from the memo to Council: "Given the unique nature of the artwork it is difficult to evaluate the potential liabilities that may be associated with its operation.  Efforts have been made to reduce the potential risks associated with unadvised, proximate exposure to the intense beam of light intended to emanate from ground level such as requiring a barrier fence encircling the light source.  Nonetheless, actual empirical risks associated with the operation of such an artwork are not known to the City.")

If there's any debate over the project, expect it to be around those ongoing costs, though it's hard to imagine Council looking a real gift horse -- or make that a gift light -- in its mouth. After all, it's a nice chance to get some big dollar public art on the cheap. And anyway, I wouldn't recommend staring down a 7,000 watt light, in any event.

Awesome, but it that a quote from the Scottish play? Eek! Bad juju!

With the lights from the ballpark and now the DPAC you can probably see durham from the moon.

I'm a fan of Plensa's work, but the quote gives me pause. I like the idea of downtown Durham awakening from a long sleep, but the quote --if I recalll my Shakespeare correctly--refers to Macbeth's guilt about killing the king and others to smooth his way to the throne.

Is downtown Durham now awake all night due to guilt about too many murders? Or what?

Whoopee! Count this as another victory for Dermites, who get to thumb their noses at the NIMBY ninnies that nixed the Raleigh project.

I also like the placement near the jail, as it kind of reminds me of a prison search light and gives the area a cool "Shawshank Redemption" vibe. Blazer Manpurse would have a field day with this one.

Is it really a responsible use of our natural resources to have a non-solar powered search light on all night beaming out to space?

I'm all for public artwork and I love Plensa's fountains in Chicago, but a couple of issues do give me pause. 1) light pollution 2) I agree with Natalie, that 7000 watt light isn't exactly green. Wonder if they could supplement the power requirements with solar panels?

I can't say I'm a huge fan of Plensa's other stuff, but hey, it looks pretty cool, and Durham has a history of great big glowing signs that light up the night. (http://endangereddurham.blogspot.com/2007/05/durham-hotel-telephone-exchange-durham.html) Not a huge fan of the light pollution -- could we mandate that the thing is always turned off after 11 PM? Or at least some cutoff?

I'm less worried about power -- we throw away giant amounts of power at night, because there's only so much you can "turn off" most power plants. As long as it's not on before, say, 6 PM, the electricity it uses shouldn't meaningfully increase greenhouse gases or anything.

I hate to be negative about any type of major art display and generally embrace controversy; however, I agree with Natalie and Weege about the crazy use of electricity. We're currently killing/dying for oil and it seems gluttonous and extremely irresponsible to waste electricity like this when we know better. Is that why Raleigh rejected it? Surely Durham cares about being green more than Raleigh. I don't get that.

And I'm with Frank on the quote... it gives me the creeps.

Light pollution and non-green power consumption is what it is, I can't argue with that. However, this thing isn't going to be on constantly between sun-down and sun-up. It will only switched on during performances and special events. I'd love to see it powered with solar power, but I don't think the required wattage is a realistic thing to tie solar panels to - unless we gave the jail a new skin of panels :-). I think getting Jim Goodman or the City of Durham to do some carbon offsetting would be a more realistic alternative... There are sustainable ways to do this...

As a former actor I am thrilled with the quote. As a City employee I am surprised they would consider including something so controversial.

The quote from the Scottish play will have the effect of officially damning the entire venture from the get-go. Allow me to suggest an alternate:

Light, seeking light, doth light of light beguile;
So ere you find where light in darkness lies,
Your light grows dark by losing of your eyes.

It will be a huge feather in Durham's cap to have an original Plensa installation in our city. I hope all the logistics can be worked out so we don't shoot ourselves in the foot and miss the opportunity as Raleigh did.

The Crown Fountain (link below) that Plensa installed in Chicago is truly a wonderful addition to that city, despite predictable and early grumblings.