We talked here back in '07 about the N.C. Railroad's plan to study the feasibility of commuter rail on the existing rail corridor. 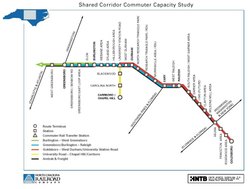 (Quick background: the NCRR is a state-owned private company that owns the 1850s-era 200-foot-wide rail corridor, leases it to operators -- currently Norfolk Southern -- and uses the cash for capital improvements.)

Well, the NCRR released its study yesterday, finding a cost of just over $1 billion to bring commuter rail service to the Greensboro-to-Goldsboro corridor.

Of course, it's worth noting that there's a very large asterisk to that number. The $1 billion isn't solely devoted to building a commuter rail system per se, but includes almost 55 miles of double-tracking -- that is, putting a second (or in some cases third) line of track parallel to the first line.

Spinning that as a commuter rail cost glosses over the fact that such permanent improvements to the railroad system are available for passenger service as well as freight service.

And the NCRR makes no bones about the fact that preserving freight service -- which, after all, is the cash cow for the company -- is its first goal, with the railroad listing in the study results that "NCRR and NS must maintain the ability to serve existing and future freight customers 24/7 without delay."

Our briefly cynical view: given the dollars very likely to flow out there from the Feds in the next few years for transit, what a great way to get the rail infrastructure upgraded in the corridor, funded and positioned as a commuter rail project!

That matter aside, the NCRR deserves credit for putting together a solid plan for commuter rail service, with the help of their consulting team.

For Triangle folks, the most relevant part of the plan are the blue, red and yellow lines in the graphic above, expected to link Raleigh and west Raleigh with RTP and Durham via Cary and Mo'ville. Durham proper would have two stops -- with west Durham, we assume, aiming at the Duke/VA employment centers -- with trains continuing further west of the Bull City to Univ. Station Rd. for a connection to a spur route to Chapel Hill/Carrboro.

The Triangle-centric Raleigh-to-Durham line and the Chapel Hill/Carrboro spur would cost about $275 million in capital improvements to the tracks and lines and for the construction of 13 commuter rail stations. The outlying segments (to Goldsboro, Burlington, Greensboro and so forth) would add almost $380 million in additional cost.

Another $355 million would be devoted to purchasing 13 trains, a maintenance facility and five layover yards.

All together, its a $1 billion proposal, though at $7 million per mile over the length of the corridor, it's fairly reasonable -- from a pure cost perspective, if not ROI from a ridership perspective -- for a transit program.

$141 million of the total cost would be for Durham County -- a useful number for comparative purposes, given that just building the East End Connector highway alone surpasses that for capital cost.

The NCRR is quick to note that this plan has not included any assessment of the ridership demand for such a service; the operating costs of running one; or how to work transit-oriented development into the mix to raise funds for the system while spurring ridership.

This is an exciting plan, and long overdue. It is ironic that this would be coming from NCRR. If I recall correctly, it was NCRR and Norfolk Southern/CSX that did not want to share the existing rail lines with TTA's trains. This forced TTA to change their plan to include building their own rail lines within the NCRR ROW. Building their own line caused the cost of the TTA plan to balloon to the point that the Bush Admin DOT was able to kill it.

NCRR's prior opposition to sharing with passenger rail does lend some credence to the idea that they are now using this new plan to get federal transit funds to help the freight railroad. However, I'm not sure it is necessarily a bad thing that the track improvements would aide both passenger and freight rail. Freight rail is far more efficient than moving freight by trucks, and reduces truck traffic on the highways.

Let's hope this thing moves forward, and that TTA can then use this as a foot in the door to use the existing rail lines as well.

Wow. I had no idea this was coming. I'm about 1/3 of the way through reading the study, and I think I'm going to have to dust off the blog this weekend and write something extensive about it. There is an awful lot in there to chew on.

better the freight on rails than on the highways.

I just hope they make it affordable to ride and think about a spur to RDU.

A. Non, keep in mind that this is not supposed to replace the previous TTA plan, but run in addition to it, with fewer stops but running longer distances. The new plan TTA (or whatever the name ends up being) coems up with will be seperate than this but should still be able to interface with it.

It's my understanding that one of the reasons this plan meets with less resistance from the freight railroads is the safety ratings of the passenger trains themselves are a lot higher (heavier cars, engines, etc.) than what the TTA was proposing (light rail or the somewhat-hybrid between light and heavy "DMU"), and therefore they are less nervous about the safety of sharing track ROWs. We already have heavy-rail passenger trains sharing the tracks with frieght (Amtrak and the state's "Peidmont" train, also run by Amtrak). I think that this proposal is a great thing for this region - I was on the Peidmont on a Friday evening a few weeks back and was very surprised to see it full of what appeared to be commuters and/or day business travelers, many of whom got off in Durham. This is actually probably a better start than a TTA-type plan, pulling people who already commute on 40 in from Garner/Clayton to Raleigh and from Mebane/Burlington(& Hillsborough) to Durham or Greensboro. It's really exciting - I hope it gets off the ground.

Anything on when this would be completed by? (At least for the Triangle?)

Is there anyone we need to talk to encourage and/or offer support for this project?

It would be, imo, a boon for the region.

On the surface the $ figure doesn't seem unreasonable, particularly given the number of stations and the long reach, a total of 141 miles and 29 stops according to the press release. A commuter rail system currently being built in central New Mexico (http://www.nmrailrunner.com) that runs at least partially on freight lines cost about $390 million, but will cover less ground (90 miles or so) and will only have 13 stations when done. If we can really build this for $1B it'd be well worth it.

There was that email address at the end of the presentation PDF. It looks like we missed out on our meeting at the American Tobacco Campus, but I would say the next contact is your state rep.

When DATA can fill up 12 person vans (which they can't on more than 90% of their trips), then it will be time to talk about commuter rail.

Hurley, what 12 person vans are you talking about? Whatever you are referring to, that's a pretty strange statement when some DATA routes are routinely full on a daily basis (as are several routes in Chapel Hill Transit, CAT, and Triangle Transit's systems).

It is nice to see that someone is serious about a commuter rail, but there is no mention of the freight rail lines that connect Raleigh to Fuquay Varina and Fayetteville. So once again, it looks like Southern Wake county is going to get the short end of the stick.

Exciting to see this but I'm afraid to get my hopes up. Light commuter rail is long overdue here. Loooong overdue.

A project has to be on the LRTP before it can be included on the Transportation Improvement Plan (TIP) for state/federal DOT funding.

If you want to see commuter rail, or bike lanes, or any other specific project in the LRTP, now is the time to let the elected officials know what the priorities should be.

It is good to see NCRR come to a realization that commuter and freight can co-exist. This is not unusual because it exist in northeastern corridors already. What I do find surprizing that the stops that TTA had proposed have now disappeared and the TTA plan seemingly has been put out to pasture. The stops promoted by the TTA plan would boost ridership and were at strategic locations where public transportation is critical to reducing traffic, important infrastructure, and centered around planned development. I believe any commuter plan absolutely must incorporate the already public approved station stops that TTA had worked so hard with the community to establish. Ridership is the key and will always be the key and those were station stops and locations are also key.

Thanks, all, for the enlightening comments and discussions. A few thoughts:

@WB: FWIW, the NCRR report notes that the commuter rail station areas listed ("Durham," "West Durham," etc.) do not represent precise locations but more general areas to help with the feasibility planning. I don't think it would be hard to co-locate commuter rail with TTA stations which is needed. I don't think the TTA plan has entirely disappeared -- it's largely present in the STAC commission's work -- though there doesn't seem to be broadbased support for funding it.

@Hurley: You have a knack for selective fact enforcement in your comments. While I agree the number of vans in DATA service is questionable, I don't hear you addressing the fact that Durham's full-service bus fleet has, by my calculations earlier at BCR, a per-pax-mile capacity utilization about double of most other local transit systems.

@Joe: I think you're right about the heavier vehicle nature of commuter rail trains vs. light rail. The NCRR report does note the 200' corridor can be used in the future for light rail, too (and even shows separated track areas.) My sense as to why freight and NCRR are willing participants in this, though, is that they get double-tracking that should increase freight rail efficiency too, unlike in a TTA-style plan, which helps them move freight not at all.