Update: The Pinhook is not opening full-time this Saturday but will host the Winky show at 8pm Saturday. See the comments for more.

After months of work, The Pinhook will be opening its doors this Saturday, November 1 -- just in time for the crowds from this weekend's downtown events.

From the press release:

Owner/operators Elizabeth Tulachanh, Nick Williams and Kym Register have ties to a range of other downtown businesses, with past experience at Parker & Otis and Alivia's; Register is a member of the popular local band Midtown Dickens and was involved in the opening of the Bull City Headquarters up in Little Five Points.

The non-smoking venue will be open Mondays through Saturdays from 4 p.m. until 2 a.m. If successful, the venture promises to provide more options for downtown nightlife and activity, something that (with the exception of the MarVell Event Center) has been in short supply in the city center district.

And what's on the bill for the first night? Starting at 8pm Saturday:

Artist Jim Kellough and composer Shannon Morrow present an expanded cinema performance featuring live music to accompany projected imagery on a giant screen. The imagery, called WINKY, uses 6 slide projectors - special effects that merge the images into a large-scale photomontage that moves and "winks". A "soundtrack" will be performed in real time by Triangle Soundpainting Orchestra, an 11 piece acoustic ensemble composed of a variety of wind, reed, string, and percussion instrumentalists.

Next weekend, The Pinhook will be one of the venues for the Troika Music Festival.

As with many N.C. clubs, a membership is required; you can fill out the form (and pay the $2 fee) at the bar or download a PDF version in advance via The Pinhook's web site.

Down at American Tobacco, the Crowe Building lobby recently got a big honkin' flat screen TV and comfy, soft seating outside the Saladelia area. American Tobacco management recently hoisted the screen up to the wall, near the terrific barber shop at the site where the shoe shine stand used to be. 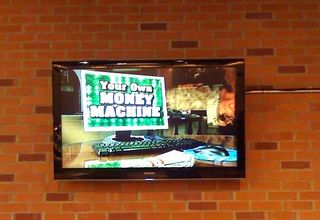 After one day or so on CNN, the channel changed. Which means that now, visitors to the ATC or folks grabbing a coffee or scone from Saladelia can watch...

Apparently, the TV is tuned to a channel that's all infomercials, all the time. Sitting downstairs for a half hour, I was deeply ed-you-kated by the "make money fast in real estate" show (talk about a re-run from 2005), before the ab-cruncher special came on.

Damn you, AbCoaster, for mocking me while I eat a blueberry muffin and drink a delicious peppermint mocha! 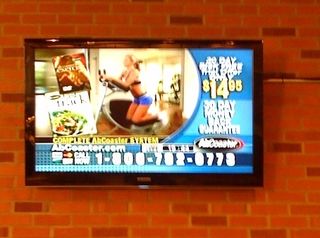 Yes, the American Tobacco Campus -- owned by Capitol Broadcasting, a major broadcaster with TV outlets in multiple cities -- runs cable to their own property. And, apparently, with their vast knowledge of television, radio, new media, and so forth, they can't find anything better to put on than infomercials?

The real question is, what will be running come Tuesday? For one thing, Tuesday's election day, and we'd expect people to be anxious to see what's going on with the presidential and state races.

For another thing, Tuesday is Jim Goodmon day at the ATC -- the day the big-boss from Raleigh comes to visit, the day son Michael (who's in charge at Ambacco) puts on a suit, the day landscapers are at their peak, putting out flowers and other accoutraments.

For heaven's sake, put on WRAL come next week, lest Jim-G throw a latte through the screen or something.

Just last night on "Shooting the Bull," I gave elected officials a tweak over the likelihood of their supporting a sales tax on transit, and called on pols to enact a sales tax to support transit without subjecting it to the kind of referendum debacle (hello, pigs-on-wheels) we're seeing in this year's election.

So imagine my surprise (and pleasure) to read this in the H-S this morning:

Mayor Bill Bell surprised fellow Triangle leaders this week by suggesting that if they ask the state for permission to levy a sales tax to support transit, they also ask for the authority to impose it without a referendum....

Bell on Thursday said he spoke up because it's clear the Triangle's long-term transportation problems are so serious local governments have to find a way to avoid political gridlock.

"At some point, when issues are big enough and important enough, elected officials ought to be trusted to carry [them] out," he said.

Hey, it's Halloween season. Did somebody dress up as Mayor Bell and trudge off to this confab of elected officials in his place?

The N&O noted earlier this week a grassroots group calling itself "Stop the Light Sculpture," formed to oppose the Jaume Plensa art exhibit we've talked about here for some weeks now.

As Barry noted at his place yesterday, the group's web site states it is an "operation funded by the citizens of Durham, NC" -- though it appears the two founding members, Mark Gibson and Chris Waldrup, are residents of Raleigh and Apex, respectively. Update: As Ross points out in the comments, their page may be more appropriately interpreted as stating that the operation of the artwork (not the opposition group) are being funded by Durham citizens.

Both are ham radio and radio astronomy enthusiasts -- check out Mark's web site to see what I mean -- and Gibson noted in an interview Thursday that the presence of a 7,000 watt light emitting energy into the sky played a factor in their interest and concern.

The forecast for substantive updates at BCR today: unlikely, given some challenges in ye ol' day job that have had us at work late Wed. and before dawn Thu.  Some quick notes:

The H-S has a feature story today on rumblings over restoring streetcar/trolley service in the Bull City. Tonight on Shooting the Bull (7:30pm, WXDU 88.7 FM) Barry and I will be interviewing Steve Mancuso from DATA -- the streetcar is one of the key subjects for this, the second half of our two-part series on transit in the Bull CIty.

Five Points Cafe appears to be closed with a landlord lock-out, which is typically the case in an event of unpaid rent. More as we know it.

With cooler fall weather here, it's the perfect time to get outdoors and active in Durham this weekend. There's plenty to see, and the Halloween theme this weekend promises to bring an interesting gestalt particularly to downtown.

Of course, there's nothing spooky about the Durham Art Walk, the biannual event that brings folks from across the Triangle through downtown to see the wares of local artists and artisans. This year, Golden Belt is a new addition to this year's tour, as is the Somerhill Gallery. Other locations stretch from Brightleaf Square to the Hayti Heritage Center to the DAP district.

With the expanded footprint of this weekend's Art Walk, a shuttle service with three routes is now provided, though if you're looking for some exercise, the route promises to be a great way to get out and stretch out those muscles. The work of over 200 artists will be on display in the 46 venues of the confab. Also up this year: musical performances both days, primarily at CCB Plaza but at several other locations to boot.

If you're a fan of the blog Endangered Durham -- and who isn't? -- you've probably seen how Gary demonstrates, time and again, how buildings that once stood majestically in the heart of the Bull City have become rubble, too often transforming into grassy open spaces or parking lots.

Preservation Durham is picking up on the theme, and looking to raise money to boot, with their first annual Ghost {building} Tour this Saturday, Nov. 1.

One might have expected a food fight during the pro and con debate over the prepared foods tax during last night's Inter-Neighborhood Council debate.

In reality, though, the most contentious part of the meeting preceded it, with representatives from various neighborhoods and the stakeholder groups working to preserve the Black Meadow Ridge property adjacent to West Point Park on the Eno differing on how to tackle the question of preservation.

While no one present disagreed on the need to protect the land from intensive development, there were significant differences of opinion on just how to do so.

The debate began with the INC's consideration of a motion crafted by the organization that stated the INC's support for the City taking "all necessary steps to purchase, or cause to be purchased, the Black Meadow Ridge Tract," while stating explicitly that the state takeover option we've discussed at length here should be considered if it is the only means by which to preserve the tract.

Tuesday night's Inter-Neighborhood Council meeting offered a forum for two key backers and opponents of the prepared foods tax on the November ballot -- Rob Teer Jr. from the committee supporting the levy, and Dallas Woodhouse from Americans for Prosperity and the opposition committee -- to offer their thoughts and ideas on the measure.

Both sides had a chance to present their side and then to answer questions from the assembled audience of neighborhood representatives and other civic stakeholders.

We at BCR captured the debate on video and present the pro and con sides here for review. Regretfully, the audio from Teer's Q&A session was not of good quality, but we've included Teer's presentation as well as the presentation and Q&A for Woodhouse.

Next up: the against case, from Dallas Woodhouse, followed by his response to questions from the audience. (Full disclosure: the question on AFP's tax regressivity concerns comes from this author.)

Once you've watched the videos, share in the comments here: what do you think, especially if you've been on the fence on the measure?

It was the night o' Herald-Stunners at the INC debate last night, hosted at the Herald-Sun: Matt Goad hung around for the whole meeting, with Matther E. "Matt" Milliken and Ray "Ray" Gronberg stopping by to check out the scene. Hey, it's a plus of having a civic room next to your newsroom, no? Erstwhile N&O survivor (and ex-H-S'er) Jim Wise was also on the scene.

Many of them still found time to file reports for their fishwraps' dailies, which work their way into BCR's Daily Fishwrap for you each morning. Reading the papers so you don't have to -- that's what the Fishwrap is all about.

No, that wasn't the prize-winning hog from the State Fair you might have seen on Durham streets yesterday.

Instead, it was a display from the opposition to the prepared meals tax -- driven by no less than Dallas Woodhouse, the Raleighite who leads Americans for Prosperity. AFP was identified in the Herald-Sun's reporting on the financial source of opposition to the food tax as being the main monetary source for opposition to the Durham levy referendum. 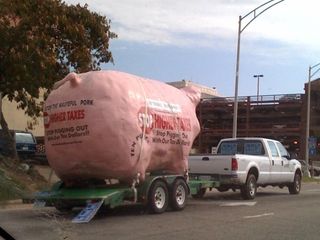 Our question: if Woodhouse is objecting to this tax as "pork" -- does that mean he'd support the levy if the funds all went to pay for law enforcement? What about if we raised property taxes to cover those costs? Inquiring minds want to know.

You can get your chance to hear straight from the mouths of opponents and proponents this evening, as Rob Teer Jr. and Woodhouse present pro's and con's on the measure at tonight's Inter-Neighborhood Council meeting, set for 7pm in the Herald-Sun's community room on Pickett Rd.