We had a chance to visit the still under-construction Durham Performing Arts Center late last week, as the $45 million project enters the home stretch in its build-out at the corner of Mangum and Vivian next to the American Tobacco Campus.

(This tour updates our February '08 look at the center; a big thanks to general manager Bob Klaus for the chance to get an updated peek at the DPAC.) The center is still on track to wrap up by late fall, just in time for what's currently its first performance, a concert by blues great B.B. King set for Nov. 30. Other pending events include a performance by Lewis Black on Dec. 3 and the performance of A Christmas Carol Dec. 5-7, with Broadway shows arriving with "Rent" in late January; a full list of shows is available at the DPAC web site.

Construction crews are completing painting and staining of the interior of the performance hall, with interior upfit work on concessions, offices and backstage areas getting underway. 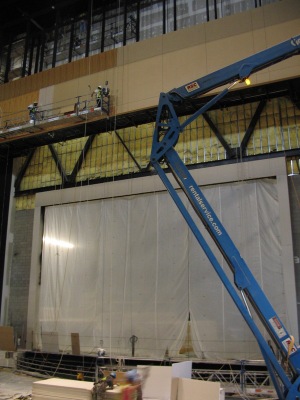 The seats -- of South American origin, with a light wood and deep red fabric -- will start their installation in a matter of days. Right now, they're stored in a perfectly logical part of the building: right on stage, pending their installation. 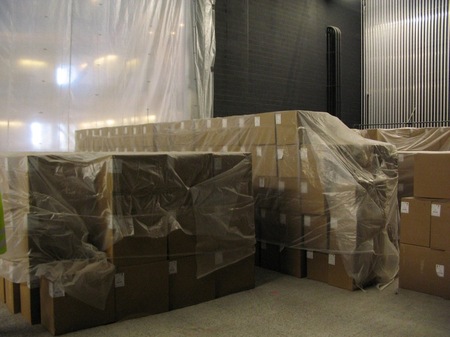 The DPAC -- its current name, pending the eventual sale of naming rights -- is making good progress, something evident now at night when the illuminated lobby lights up the glass-and-steel facade, shining a nightlight of sorts on downtown.

The view looking back from isn't too shabby, either: 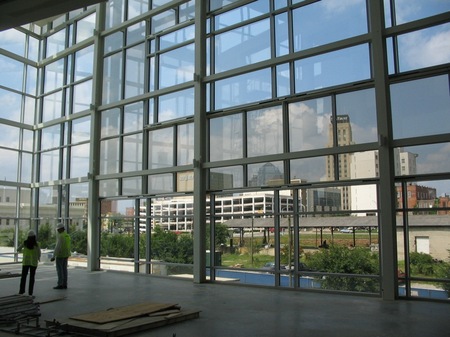 One of the great things about the DPAC's design is the view it gives of downtown. As much as the Bulls' ballpark increasingly feels enmeshed inside the growing world of American Tobacco, when you're standing in the lobby during a show at the DPAC, there's no question that you're in the heart of the Bull City.

Inside the performance hall, the stage and surroundings are coming together, and reinforcing the close-in nature of the facility, whose most distant seat sits just 135 feet from the edge of the stage, thanks to the three-tier seating design. 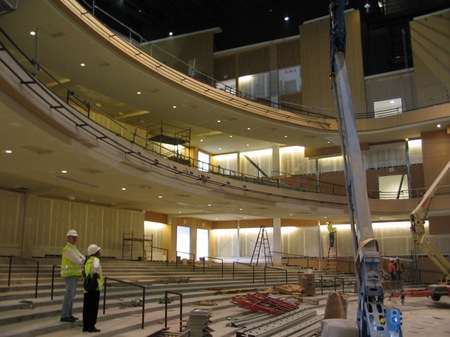 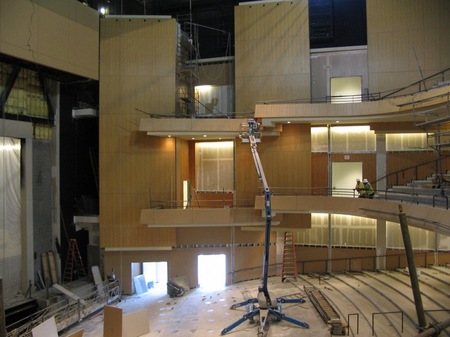 The stage-level (Orchestra) tier seen in the first photo above will hold 1,500 of the seats, with the second-level ("Grand") tier from which the second photo is taken housing another 500.

The remaining 800 seats are in the third-level balcony section: 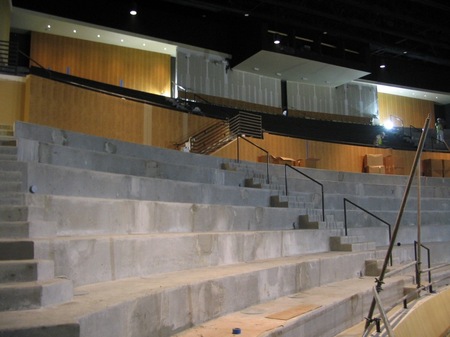 Construction in the lobby level continues at a good pace, too; the three-tiered space continues the wood theme from the performance hall, with concession areas starting to be installed. 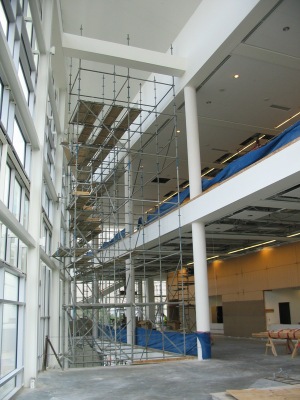 Still no official word on what's happening when on the west side of the building; Capitol Broadcasting had initially expected to be underway with the wrapper buildings that would hide the East Deck parking structure as well as the exposed flank of the DPAC -- including the ground-level HVAC units that would have been hidden by the residential buildings proposed for the growth of the east side of American Tobacco. Given the housing and construction downturn, we wouldn't expect this to get started anytime in the immediate future.

It's all coming together for the district. The center was a worthwhile investment in downtown growth, more so that it helps to further change outside opinion of Durham's past image. The views from the DPAC will look even more stunning with the addition of the Greenfire towers and condos across the tracks. Any news on when we can expect the lumber yard to move on to greener pastures?

I'll definitely be there to see Lewis Black. He and Ron White are two of my favorite comedians.

Thank you so much for posting these photos!

I used to work on the "house" side at a performing arts center during its very first years. It was so thrilling to tour that building during the various stages of construction, but it was this point that you're seeing now at DPAC - the point when the proscenium arch is almost finished & the seats are about to go in - that was most exciting for me. That's when it stops looking so much like a construction site & really starts to look like a performing space. I can't wait to see it in person!

So, what is to become of the rail depot-type building that sits in front of the DPAC? According to Durham GIS, it sits on a parcel owned by Southern Railway Company, Roanoke, VA.

I was skeptical of the DPAC, but I stand corrected - great building and great for the energy that is picking up downtown. Can't you just feel it?? A new era is dawning for the Bull City folks - time to get onboard the TRAIN!!!

BTW, for those of you that have never seen it, one of Raleigh's few valuable exports is the Christmas Carol by Ira David Wood III. It is a tremendous tradition in Raleigh and as a person that has seen it, I highly suggest that you take the family and go to it - really well done and entertaining, and Ira David Wood is fantastic.

I'm still a bit luke warm on the exterior design, but the hall looks fantastic. I truly expect this to be the best theater in the state to see any kind of large theater piece or comedian or music act or event. If the photos are an accurate indication, it'll beat the pants off Memorial Auditorium in Raleigh and Memorial Hall in Chapel Hill.

It looks okay I guess

It does look like a nice building, but I can't help but shake my head and think of it as another step away from King's Sandwich Shop and towards the $2.50 cupcake.

Great photos and great blog. Thanks for keeping us updated!

I want to know about getting a job at the dpac