Some photos from the DAP renovation

The ol' Durham Athletic Park renovation has been starting to slog along this summer, and one BCR reader was kind enough to send in some photos from a recent visit to the construction site.

According to the City's most recent update to the DAP's capital projects report, work began in July on field and utilities construction, after the City Council's approval of additional funding in June 2008. The current construction phase literally lays the groundwork for the rest of the project, with this aspect of the DAP renovation beginning even as the City negotiates contracts for the remainder of the work.

One challenge with the site is the ancient utility infrastructure passing through the old ballpark, something evident in this photo: 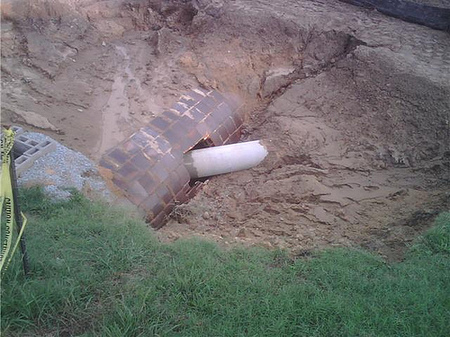 More photos below the jump.

So far, the most visible work on the site has been a whole lot of earth-moving going on: 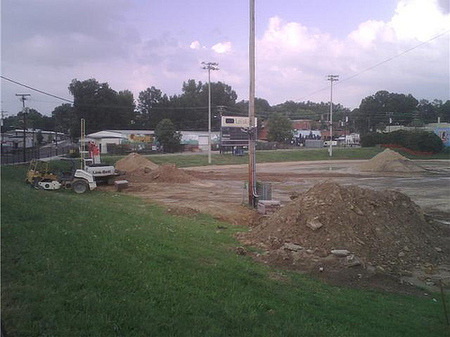 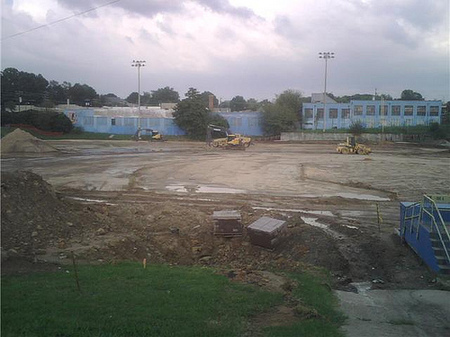 The project's completion date has moved to first quarter of 2009, with this year's major DAP-using events -- the World Bull Festival and the Bull Durham Blues Festival -- having moved over the the Durham Bulls Athletic Park for this year's cycle at least.

"...this year's major DAP-using events -- the World Bull Festival ...having moved over the the Durham Bulls Athletic Park"

I thought City Council meetings were still being held at City Hall.

Yet another example of how our city cannot complete prior projects before starting new ones. Seriously where is the new playground equipment for Northgate Park? Is it that hard to construct a playground? While I'm not opposed to the renovations at the DAP I just wish we could finish projects in a orderly fashion. Not really to much to ask for.

Quit whining, Mike. It's only been 12 years since the bond money for Northgate Park was appropriated. It's not like anybody uses any city parks beside Oval Drive Park anyway. Or has any need for traffic calming anywhere other than Club Boulevard between Carolina and Virginia Avenues. The city has its priorities straight. No need to stress about it.

Heh. Nearly every morning for the past month and change I've walked my dog past the same contractors parked in the parking lot at Northgate Park, LOOKING at the same blueprints spread out on the hood of their truck.

I know Barry, I should just be quiet and get in line without question. What was I thinking. ;)

The eastern branch of South Ellerbe flows north out of downtown -- through Durham Central Park, under the DAP and past Trinity Park.

The two South Ellerbe branches join Ellerbe Creek near Club Blvd Elementary. Part of the Neuse River basin, these creeks flow through some of Durham's oldest and most densely developed neighborhoods.

Here's a photo taken from the creek under the old ball park -- looking up... http://www.owdna.org/fosec2.htm (see bottom of page).

Looks great. I'm looking forward to seeing the DAP when the work is completed. That part of town has some major potential.

Glad I got out of there before the construction started!

I think you meant to link to http://www.owdna.org/fosec.htm -- there's a photo of the tunnel under the pitcher's mound about halfway down the page.

Thanks for your note, Dan.

We have two photographs taken from under the DAP on the Friends of South Ellerbe site...

* the tunnel under the DAP is shown here
http://www.owdna.org/fosec.htm

* the image looking up from the underground creek -- is shown here
http://www.owdna.org/fosec2.htm

This second image was taken from the creek, looking up into a storm drain (showing old brick sides and a metal grate above).