Even as Durham finds itself drawing more and more newcomers to the Triangle -- from the new Durhamites lured to the fast-growing Southpoint area to the residents of revitalizing downtown neighborhoods -- there's one big demographic that the Bull City has tended to underdraw.

And that's corporate executives. While academics and physicians may tend, for reasons of preference, fit or proximity, to live in the Bull City, North Raleigh, Cary and the like have tended to be the first destination for higher-end real estate sales.

One approach to changing this: a new campaign called "Make IT Durham," launched by the Durham Chamber of Commerce, with $30,000 in funding from the City Council to back it up.

Driving through downtown yesterday morning, I noticed a new 'do at the W. Main St. home of The Pinhook, the new bar and music spot next to the MarVell Event Center.

The Greenfire-owned property stands out quite a bit, with a very distinct new gray-and-red color scheme setting the building apart from its neighbors: 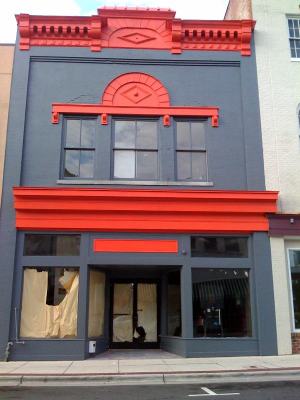 The 117 W. Main St. location looks quite a bit different now than it did last time the Google Street View sedan drove by. Personally, I like the new colors better, as surprising as it was to see upon driving by. 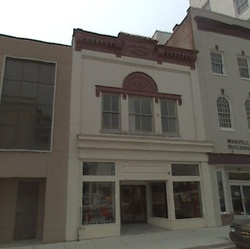 We're kicking off a pilot of a possible new daily feature here at BCR: A quick index to what we consider the key Durham-related headlines and news items in the mainstream media each morning. Think of it as a browser's index to what's in the news today, with links to drill deeper if you want.

Ashley: H-S positioning itself as "the dominant paper" in Durham

The Duke Chronicle just wrapped up a three-part series on the changes and challenges in local news -- including both college and local major media papers in the process.

Of particular interest: Bob Ashley's comments on the current travails at the N&O and the Herald-Sun, from which he seems to speculate that the venerable Durham paper could emerge in a stronger position:

Conversely the Herald-Sun has tried to fill the niche for purely Durham-centric news items.

"The News and Observer is retreating from the Durham part of its market," Ashley said. "We're asking people to really push hard right now in what we see is a moment of weakness for our competition and see if we can once and for all establish... the dominant paper in the market by a considerable margin." [....]

Continue reading "Ashley: H-S positioning itself as "the dominant paper" in Durham" »

The N&O had more to say in this weekend's The Durham News about the new "Operation Green Light" mascot we featured here last week.

In 2005 and 2007, voters approved $26 million in bond issues for street paving and resurfacing. By the first of this year, according to Public Works Director Kathryn Kalb, 23 miles of city streets had new pavement; by summer 2009, the total should be up to 35, out of 686 miles of city streets in town.

Nevertheless, assistant city manager Ted Voorhees told the city council last week, "You probably don't know a whole lot of people around town who are saying you're doing a great job with resurfacing."

But the city has a plan: "Operation Green Light: Smoother Roads for Durham," a street repaving public-information campaign to "inform the public ... that the city is making progress," said city spokeswoman Beverly B. Thompson.

According to Jim Wise's reporting, the mayor pushed for the program as a way of highlighting the progress being made with local street repaving. (We here at BCR will consider us on a schedule for real progress when we find ways to fund routine street repaving out of our city operating budget, and not bond bucks, but that's neither here nor there.)

Look for a web page with status reports on paving activities plus more media releases on the work the City is doing around repaving.

And look for the little green light guy to get a name. "Now, he's just 'Our Little Friend,'" according to City spokeswoman Beverly Thompson.

Wachovia: Charlotte to fear the hornet's sting of banking crisis?

Try to imagine, if you will, how it would feel to see a news story like this one cross the wire services:

RALEIGH, N.C. (AP) -- The trustees of Duke University announced today a breathtaking combination with Princeton University in the latest reverberation from the higher education market collapse.

The takeover, valued at $8.7 billion (U.S.), comes on the heels of last week's Johns Hopkins-University of Chicago merger.

In this week's edition of "Shooting the Bull," co-host Barry Ragin returns from his West Coast expedition to catch up on what's been happening in the Bull City.

No guests this week, just us catching up on everything from the food scene to the prepared meals tax to Durham's readiness for transit.

Incidentally, at one point in the broadcast, Barry brings up the topic of average perceived densities of communities. Tim, one of our listeners (and part of the Counter-Cartographies Collective currently organizing a show down at Golden Belt) worked up a spreadsheet to calculate these data for North Carolina cities. (Download nc_municipalities_weighted_densities.pdf)

Thanks as always to the folks at WXDU for the opportunity to host this weekly show, and to Josh Parker for sitting in for the past few episodes.

If you missed the Thursday night broadcast, you can download or listen to the show from the Internet Archive, or listen to it via this embedded player. You can also subscribe to the show in iTunes, via WXDU's hosted podcast.

BusinessWeek names downtown Durham to list of "up and coming" neighborhoods

And, in fact, what's loosely termed 'Downtown Durham' makes BusinessWeek magazine's list of the top fifteen "Up and Coming Neighborhoods" in the U.S.

Though one must wonder what kind of prize it is when the description of what makes a neighborhood "up and coming" seems to come right out of a twisted version of Stuff White People Like:

Of course, these transitional neighborhoods, such as Castleberry Hill in Atlanta, Wynwood in Miami, and Northeast Capitol Hill in Washington, aren't for everybody. The neighborhoods typically aren't known for their great public schools and are in early stages of gentrification.

"It depends on how tolerant people are of nontraditional lifestyles," Villani said of transitional neighborhoods. "You have to have a capacity to overlook the presence of homeless people, to not be intimidated by street life. You need to have a sense of inner security that's not going to be upset that life will be kind of chaotic at times."

We noted here last week that the current financial crisis seems to have had an unsettling effect on the market for municipal debt issues, with the AAA-rated County unable to find a bidder for $30 million towards construction projects.

Still, the City was able to pull off its sale of almost $59 million in general obligation and two-thirds bonds back in August -- before the current market meltdown began.

And in a memo to City Council, interim director of finance Keith Herrmann calculates out a pretty decent savings to City coffers from the preservation of a AAA bond rating for Durham:

The savings realized by the City by having a triple AAA rating can be approximated using the difference between the BBI index [a weekly composite of transactions in the tax exempt municipal bond market representing a blended rating between single A and double AA] and the rate the City actually received. For these bond sales the City will save about $3,550,000.00 in interest costs over the life of the bonds by virtue of our triple AAA rating.

Some back-of-the-envelope based on the information in Herrmann's memo to Council leads us here at BCR to calculate that we'll end up spending about $26 million in interest payments through 2026 to finance this $59 million in borrowing.

In that case, then the AAA rating (under our scenario of assumptions) reduces the actual borrowing cost for the Bull City by about 12% -- or from about $29.4 to just under $26 million.

The City Council will receive a report on the summer bond issue and other financing activities at their October 6 Council meeting.

It's been a real pleasure getting to write Bull City Rising for the 1,000 or so daily and 12,000 monthly readers... and, especially, to read the comments in return. Thanks for reading and thanks for responding to BCR.

I'm pleased today to roll out a new look and some new features for BCR. At the end of this post I'll talk a little bit about where this all might be headed. For now, though, let's look at some of the changes.