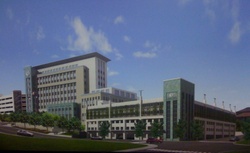 The County Commission approved in work session today a revised design for the parking deck supporting the new county courthouse to be built just south of the jail between Roxboro and Mangum St. The revised design includes modifications for the future conversion of 4,200 sq. ft. of the deck into future retail space as demand warrants.

BCR readers may remember a minor dust-up taking place here and elsewhere on local blogs earlier this summer over the design of the deck, which repeated a design element that's been criticized here and in other corners of downtown: the lack of street-level pedestrian activity, such as retail space, to keep Dillard and Roxboro from becoming a pedestrian dead zone.

The County administration seems to have found a decent compromise for the problem, given the administration's apparent position that there's no market demand for retail in the location today. Instead, the County has agreed to "stub out" the deck, providing the infrastructure to allow up to 4,200 sq. ft. of the deck to be converted to street-level retail sometime in the future.

The convertible area will start on Dillard near the corner of Roxboro, and will extend halfway up the length of the parking structure on the Roxboro St. side.

Downtown Durham Inc. -- which, like the City's downtown district review team, raised a concern about the lack of street-level pedestrian-scale activity -- announced the plan change in a communication to its board this afternoon. DDI's board voted in August to engage the County over its worries about the parking deck design.

According to a DDI memo sent to the Board of County Commissioners, County Manager Mike Ruffin, and County engineer Glen Whisler, DDI had noted that the inclusion of street-level retail in structured parking was a key recommendation of the recently-revised Downtown Master Plan, and that it would be desirable to avoid the walkability challenges that the Durham Centre's badly-designed deck provides today.

The DDI memo notes the receptivity of Whisler and the architecture team to the concerns, but added that land slope, financial and legal issues remained concerns -- as did the concern of County stakeholders as to whether Roxboro St. could ever be a viable space for retail activity.

Yet as DDI pointed out, Roxboro St. is likely to be transformed by the redevelopment of the Elkins and Hendrick auto dealerships -- and by the proposed conversion of Roxboro and Mangum Sts. to two-way traffic, a topic that DDI and Capitol Broadcasting are discussing with NCDOT.

Thus, the compromise was born. Given the admitted grade-change issues on the site, this seems like a pretty decent compromise. Kudos to the County for coming around.

Intriguingly, we here at BCR found out about this this afternoon from two separate sources -- but the news came a day after reading about it at "One Guy's View," a nascent Durham news blog set up by the mysterious, eponymous "Guy," a self-described Durham insider who's decided to offer up his or her own perspective on Durham politics, from the perspective of someone who is decidedly "not a cynic, something that I have to say I see all too frequently in other Durham blogs."

Critics argued that [the deck] should be wrapped with retail and commercial space. Unfortunately, grade and and easements greatly restrict the ability of the County to include the desired wrapper. In addition, no one seems to have considered that, but for the jail, the area will not presently support retail space. Consequently, if the County were to offer the space in 2011, the only interested parties would be bail bondsmaen. I can just see the neon signs strung along the east wall of the deck - what a beautiful sight!

Instead of creating "Bail Bond Alley," the County smartly opted to design the deck for retail space along the southern half of the east wall, but recommend delaying the construction of the space until the market will support the retail uses that will complement what is planned for the area. That's not likely to happen until Scientific Properties develops the Elkin's site.

According to Guy's Monday morning post, the County Commissioners would have learned today that the deck's construction cost has soared by $16.5 million, in what insider "Guy" predicts would "come as a mild surprise" to the commish team.

So thanks again to the County for listening -- and to Guy, a new blogger who clearly has a lot of devotion to the Bull City. We here at BCR (and our readers) are looking forward to hearing more from you.

Thank you thank you thank you. To DDI for their support of a better design. To the County Commissioners for listening. And to BCR for helping to keep the issue intelligently in front of the community so we could have improved influence in the design of publicly funded projects in downtown.

I also want to thank the commissioners for listening. This new measure will have a very positive effect, making the area more attractive for pedestrian traffic.

Well, we have criticized them when they deserved our criticism. So let's give credit where credit is due. The County made the right decision in this case. Thank you for doing what is right - this is the kind of long term vision that citizens expect of their elected officials. Thanks also to DDI, BCR and BCR readers. Kevin, it never ceases to amaze me just how many people read this blog and the influence it has.

That is great news.

I for one was bitterly frustrated with Glen Whisler and the others in their (perceived) obstinate refusal to consider the concerns. So, I'm very pleased and happy that the county has reconsidered this, so my hats are off to them for their flexibility in listening to the taxpayers and the citizens that they serve. I stand corrected - I didn't think this day would happen.