American Tobacco Trail users will find themselves making a bit of a detour near the Forest Hills and Southside/St. Theresa neighborhood next week. 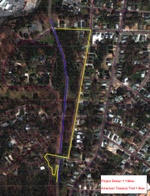 The ATT will be closed between Enterprise St. and the Apex St. Bridge for three weeks beginning Sept. 2 as part of a gas line relocation; during this time no traffic will be allowed on that segment of the ATT.

The utility work is a precursor to the upcoming removal of the Apex St. Bridge, as approved two years ago by City Council. The bridge was initially constructed by the American Tobacco Company to provide a route around trains running from their factory southward along today's trail corridor; these trains frequently held up traffic on Enterprise St., and the Apex St. connector provided a vehicular bypass.

A 2001 vote called for the full replacement of the bridge, but in 2004 the body on a divided 4-3 vote opposed a new vehicular bridge replacement. The bridge was then limited to pedestrian-only traffic before a final vote in 2006 to remove the bridge entirely and add in its place a ramp connecting the ATT to the east side of today's bridge.

(A ramp already connects the ATT with the western, Forest Hills-facing side of the ATT -- a disparity I've not been in Durham long enough to know the history of.)

The detour will route ATT users one block east of the trail through the Southside/St. Theresa neighborhood via the existing western ramp and the decaying Apex St. bridge, rejoining the trail at Enterprise St.

Read more over at Nicomachus.net, including a clip on the bridge from a documentary video segment on the ATT.