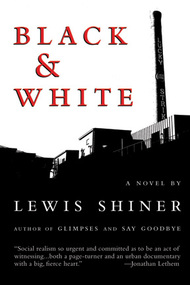 The story of race relations in Durham are a frequently told tale, from the well-told story "The Best of Enemies" to the recent documentary film "Durham: A Self-Portrait."

Now it's time for Raleigh-based graphic novelist and writer Lewis Shiner to get into the act with a novel, "Black and White," published this month by Subterranean Press.

The novel -- which is prominently featured at The Regulator on Ninth St., which will host a reading with Shiner next Friday, July 11 -- mixes modern-day and urban renewal-period Durham, telling a family's story intermingled with a fictionalized tale of race relations in the difficult South during the civil rights era. As the Los Angeles Times' Sarah Weinman writes in her book review this Sunday:

The novel's quiet start introduces Michael, an Austin, Texas-based fledgling comic book illustrator who, at age 35, thinks himself "too old . . . to spend this much time with his parents" even as his career and romantic prospects leave him with limited options. The terminal cancer diagnosis of Robert, his father, and Robert's insistence on spending his dying days in Durham, N.C., give Michael a new purpose and bring him back to his birthplace, where he will hear his dad's last confession: involvement in a murder four decades ago in the heart of the once-bustling black Durham neighborhood of Hayti, which has lain fallow ever since, after deeply embedded racial hatred brought it down in flames during a riot.

The admission opens a Pandora's box of twists that shred Michael's supposed origins to ribbons and are revealed in a mixture of lengthy flashbacks and multiple viewpoints growing seamlessly out of Shiner's narrative. The tiered structure presents, with startling emotional acuity, an array of characters and allows the reader to see them in their truthful, monstrous, sympathetic glory.

Although the N&O was a little more mixed in its praise for the novel in its own review, printed in Sunday's paper, the early buzz on the book ("Motherless Brooklyn" author Jonathan Lethem calls it "both a page-turner and an urban documentary with a big, fierce heart") coupled with its Bull City canvas make it natural summer reading for Durhamites looking to see a more-fictional perspective on our hometown.

No doubt this book repeats the old canard that Hayti was destroyed by the white man over the objections of the black community. As has been pointed out many times, the black community was in favor of urban renewal, including the downtown loop and the durham freeway. Durham's (white, liberal) mayor at the time had significant concerns about the impact to the black community, and he did his damnedest to meet with preachers and other black community leaders to hear their concerns. Nary a peep, according to his talk at Preservation Durham last spring -- and he's continued to voice his objections to the way things are portrayed in "Durham: A Self-Portrait."

But I suppose hindsight is 20/20, and sticking it to the man makes for a great narrative (just like pot-banging). One can make the case that the "black community" circa 1955 was not fairly represented at the time (i.e., the truly downtrodden who didn't go to church and existed on the margins of society), but I've yet to see anyone make that case.

I'll certainly put this on my reading list; having just finished J. Lethem's "Fortress of Solitude" I am quite impressed with his recommendation. If only amazon.de would deliver to Switzerland!

FYI: The Durham County Library has a number of copies of thhis book, though all of them are checked out at the moment. (I'm fourth on the waiting list.) You can request a copy at the Library's newly redesigned website: http://www.durhamcountylibrary.org/

And kudos to the Library on the new website redesign. It's much better than the old site.

rollins - if you're not familiar with Lewis Shiner's past work, let me just say i would not make any assumptions about how he's going to plot this out.

Rollins - Urban Renewal to some was an economic tool to bring people back to the inner cities and "revitalize" these neighborhoods. There were some people who believed this would help the community and lead to more businesses and consumers in the inner city. (People continued moving into the suburbs...whites and blacks)

There were others who looked at this plan with skepticism. Would the houses and business districts be replaced? Was it just a method to bulldoze the black community out of the city?

Your statements oversimplify this period just as much as saying "It is another example of the man out to get us..." Even though I was not around during this time, similar subplots play out sometimes today.