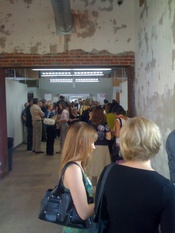 Scientific Properties and Duke's Nasher Museum of Art kicked off the first major public event at Golden Belt last night, a party celebrating the opening of Golden Belt's contemporary art gallery, ROOM 100 -- and a chance for art patrons from throughout the Triangle to get a peek at the nearly-completed Golden Belt arts complex.

Organizers originally anticipated a turnout of 100, but found three times that number RSVP'ing to get a chance to see the Golden Belt artist studio and live/work apartment spaces, including members of the Nasher's Young Friends organization and that of its peer at Raleigh's N.C. Museum of Art.

(See the February coverage at BCR for more detail on the property and photos from its construction phase.)

Besides the opening of ROOM 100 and it Branch Gallery-curated first exhibits, one of the real highlights of the evening was the chance to tour the 35 artists' studios rented by local practitioners of fields ranging from painting to photography to jewelry to crafts. Most of the studios were occupied by their tenants, many of whom had work for sale on display in the space. 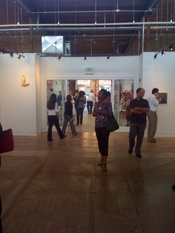 The opportunity to have a working studio in close proximity to other artists brings a number of attractions -- professional, social, and practical -- to all of the tenants we spoke with last night.

Golden Belt is expected to hold as many as ten major events per year, and will be open for Durham's Third Friday arts events, all of which brings a mass of browsers and buyers that individual artists don't feel they could attract by themselves.

Tenants also spoke of the importance of having a place that allows artists to learn from each other, to share in the kind of work they're doing and to get advice from their fellow practitioners, rather than working in isolation -- and their interest in simply finding a local venue for working and showcasing.

Geraud Staton has lived in Durham for many years but until now has primarily showcased his art in Richmond, Va., making the long drive up I-85 to galleries and shows to highlight his own Seraphim Studios.

"They've got lots of these little studio spaces for artists," Staton noted, adding that he had been considering building some kind of shared studio gallery of his own when he heard about Golden Belt opening.

"It feels great. Durham has started doing more with the arts, and it's wonderful," Staton said. 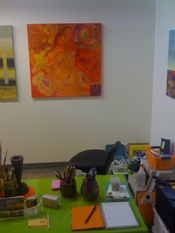 The NCCU alum had also checked out Raleigh's Artspace, which has similar though more expensive (and juried-entry) studios. "[Artspace] was big at one point, but it was a very different feel. You pretty much had to be established," he said.

Staton -- who's been painting for fifteen years, the last four of which as a profession -- moved into Golden Belt a couple of weeks ago when the studios finally opened in mid-July.

He found the chance to interact and engage with other artists one of the most positive aspects of the new space, from both a professional development and an exposure perspective. "If one artist has an open house [in Golden Belt], it's good for everybody," Staton said.

Donna Croughen, a long-time Chapel Hill resident who's been practicing her art for fifteen years as Dona Nova Arts, welcomes the chance to engage with colleagues, having formerly worked in a personal studio in an isolated, rural area. "The more people you get together, the more it's a catalyst to do interesting work," Croughen said.

She noted that Durham in general, and Golden Belt in particular, provides an affordability and accessibility paired with unique architecture, a combination that other venues in the Triangle can't necessarily match. Croughen learned of the studios in an email on an Orange County arts guild list a year ago and signed up the very same day.

"Every time I came here, I thought, this place is so beautiful. Durham is still locally cool and funky."

Alisand Swanson, like Stanton a veteran of the Durham ArtWalk, was thrilled to have the opportunity to move her work out of her kitchen and into a dedicated art space. "It was like moving into a dormitory, on your first day of college, and meeting all the other people on your floor," she said.

Swanson noted that she lives in close proximity to the northern DAP district, and had seen in the past 20 years the impact that Claymakers and Manbites Dog Theater had had on her part of Durham. Based on her interactions with her new neighbors in the residential district just east of Golden Belt, the jewelry artist predicted a similar positive impact on the surroundings.

"The people who live around here are very interested [in the project] and I think they must be glad for something that anchors their neighborhood, gives it some forward thrust."

Besides touring studios and the ROOM 100 gallery -- which will be open to the public 10am - 6pm Tuesdays-Saturdays, noon - 6pm on Sundays, according to the H-S -- the evening also served as an opportunity for Scientific to showcase the complex's loft apartments, which are now largely completed and in some cases occupied.

As noted in our February look at the complex, the monitor windows in the building's roof coupled with the light-court designs of the floating and extended lofts provides studio space with natural light in each unit. Scientific Properties' Reuben Brady noted the preservation of the historic window look necessary to meet preservation development standards while replacing the glass with Low-E, energy-efficient panes.

Brady, noting that the natural light from the monitors and the large floor-to-ceiling windows in each unit were "the key to selling the place," noted the apartments' "very simple, modernist-type design," down to the polished concrete floors in each unit.

He added that restaurants, retail and a live performance venue were all still in the works for Golden Belt, though adding that nothing had progressed in lease-up to the point of making an announcement.

(See also the very good H-S piece this morning by Susan Broili for the paper's take on last night's opening.)