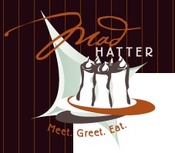 Mad Hatter's has been a Durham institution for years over at the corner of W. Main & Broad St.; the one-time corner gas station was converted to a bakery-cafe and cake shop when the Hatter moved from Erwin Square into the old Owens Broad St. Diner space in 2001.

And its owners have had a big impact on the local community -- most notably when co-owner Grace Nordhoff decided last year to donate $200,000 as an endowment for the Duke-Durham Neighborhood Partnership, the university's outreach program targeting community engagement and support.

They've been active in less-obvious ways, too, as a meet-up point during bike-to-work events, a participant in countless fundraisers and non-profit events, and so much more.

All good things come to an end, though, including Nordhoff and Jason Balius' ownership of the eatery. They've announced the sale of Mad Hatter's to none other than the owner of Saladelia here in the Bull City.

Balius noted on Thursday that there was interest from national chains and franchisees, due doubtlessly to the presence of nearby Duke and the prime location between downtown and Ninth Street. (It's not hard to imagine the spectre of a PaneraCosiAtlantaBreadBakeryShoppe taking over the stately old building.)

True to their community roots, though, Balius and Nordhoff decided to keep it a local affair. "We wanted to keep it as kind of a community space," Balius said in a brief interview on Thursday, noting he wanted the business to continue to "support local artists, local growers."

The transition isn't due to cafe business, but personal business instead. Nordhoff is relocating to her home in Seattle, while Balius is moving to Florida to pursue new ventures.

Balius thanked the community for the support they'd had during their tenure in Durham, a run that for Nordhoff includes undergraduate days at Duke (class of '82) and her ownership stake in the venture since the early 1990s. (One-time co-owner and founder Jeff Fried passed away in 2001.)

"I hope we have exceeded expectations and have given back to the community," Balius said.

Mad Hatter's took some lumps this year from listservs and blog comments, this site included, for restricting laptop use, though Balius noted the business had invested heavily in adding dozens of power outlets, only to have customers crowd seats for hours nursing a cup of coffee. (Balius noted it was one of the more frustrating experiences in his years in the restaurant business.) Yet nothing should overshadow the years of excellence Nordhoff, Fried and Balius put into the local institution.

Saladelia owner Robert Ghanem could not be reached for comment late Thursday; we'll give an update for the local cafe's plans for the space when available. Ghanem's company is also expanding into American Tobacco in the old Starbucks space; reports put the opening for the new cafe and grab-and-go site as being "imminent."

I believe that it is Saladelia.

Yikes -- can't believe I missed that. Thanks C!

Oh no, now where will I get that signature "Black and White Cake" that my 87 year old grandmother craves on her birthday?

Sincere props to Mad Hatter's for always giving out free dixie cups of cool drinks and some snacks to the Pride marchers each year. Was always nice to see the them there on the corner being so supportive. Saladelia will have big shoes to fill in that regard.

shoot, we need a Neomonde in this town, not three Saladelias.

Durham Bull Pen is right. The Black and White Cake is truly delicious, one of my favorites. However, their pastries lately were terrible. I also hope it does not become another Saladelia.

Next time you're standing in Mad Hatter's, look down and you might see the old home plate.

When I stopped in for my afternoon latte yesterday, Robert told me that he intended to continue it as Mad Hatter's and make few changes.

Does that mean they'll keep the cakes? If not, they need to have their pastry (cake) chef take a gig somewhere else!

You just will not report on the Joy Johnson rape case will you?

Jay - why don't you start a blog (blogger.com lets you do it for free) and organize a cacerolazo in front of their house?

You do realize that 1) Kevin is not a "reporter" and 2) this is not a news organization, right?

The Mad Hatter once was a proud, less profitable business that featured quite the hat collection and a small time feel. Of course, I am speaking of the Erwin Square location.

Since the huge investment they put into the new location, the prices have continued to outpace the neighborhood tolerance, as superior product is just feet away in the Whole Foods hot foods line.

The recent decision to ban laptops was absurd and unreasonable. Mr. Balius was a unique individual, but you never really knew where he was coming from. At one point, I thought they were going to open 10 of these things and take over the triangle. At least he talked a mean game.

Buying the Peterson house is pretty epic. Give him that. I hope he made a decent return.

I never understood the love affair Durham had with The Mad Hatter, goodness knows I tried - Oh, how I tried! It would have been fabulous for me to share the love - they are within walking distance from my home. Rather, when there, I experienced a restaurant with over-priced, mediocre food (the kind that sounded and looked better than it tasted), with terrible traffic flow, to boot. The cakes and pastries followed suit, looking impressive, but were ultimately disappointing to eat.

The fruits of the infusion of philanthropy the owners generously bestowed upon Durham will no doubt continue to be felt, and for that I am grateful. But let's try really hard not to exalt the contribution The Mad Hatter made to the food scene in Durham.

As for Saladelia, I already have my favorite Mediterranean eateries, so I don't really see the need for another Saladelia. I am very concerned that Saladelia is proliferating in Durham, reaping the benefits of business in Durham, but didn't return 10 phone calls/messages I left them last year on behalf of our school's PTA seeking a little help - Not even one return call. Rather, if Durham supports them, I'd like for them to support Durham, too.