Bull City Rising
About Archives @bullcity
City Manager finalists to be revealed, on tap for public forum tonight
First reactions to the Durham City Manager candidates forum -- and how you can watch

Speaking of public forums, we'll be interested to compare the turnout for tonight's City Manager search meeting against Tuesday night's update on the design process for the American Tobacco Trail's Phase E. 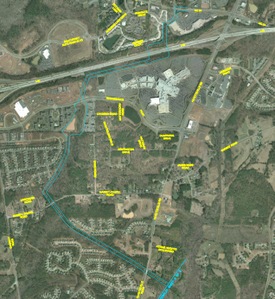 As we've talked about here before, Phase E includes the I-40 pedestrian crossing bridge as well as several miles of trail connecting the popular greenway from its current terminus at NC 54 to the Chatham County line. A November public meeting to gather community priorities and provide a background on bridge design concepts brought out over 110 participants, squeezed into the small committee room on the second floor of City Hall.

Tuesday night's program moves to the much-larger first floor Council chambers. Expect a significant turnout to see the latest from Steven Grover, the Berkeley, Cal.-based consultants for what city leaders have called a "signature bridge" gateway over the I-40 corridor.

We understand Grover's firm will present a selection of bridge concepts and designs, based presumably on the feedback from the triangulation survey that attendees were asked to complete at the last meeting. The outcome of the feedback from Tuesday's meeting will provide significant conceptual input to the final bridge design; the City is currently negotiating a contract with Parsons Brinkerhoff for the actual design itself.

According to the City's web site on the project, notice to proceed on the design is scheduled for June 2008, with final design submittal set for March 2009. Assuming the project stays within the enlarged budget of $6.37 million (a cost that includes 4+ miles of trail as well as the bridge), the project would be let for construction bidding in June 2009 and would be expected to be completed by summer 2010.

to compare the turnout for tonight's City Manager search meeting against...tonight's turnout for the Obama rally in Chapel Hill :-)

Actually, I suspect that a few folks will do the City Manager meeting, then will truck over to Chapel Hill. Car pooling, of course.

We don't need to be there Kevin...that's what we have you for :)

Please DO come to the ATT I-40 bridge meeting on Tuesday night. I've not seen mention of it posted as widely on area bulletin boards as the November meeting was.

I just lost a long diatribe and rant about the lack of progress on this project when I clicked on one of the links to the recent posts to the right of these comments.

Suffice to say that this 2nd meeting should have been scheduled long before now. It doesn't take six months to come up with designs for a bridge across I-40.

It does not take a year to develop a final design.

City management and staff, as well as Parsons Brinkerhoff staff should keep in mind that with 10% inflation, this project increases in cost by about $1770 per DAY.

This should be enough to hire at least one, if not more, staff/consultants to work on this project full time to do the legwork, design work, due diligence, legal work, meetings with all parties involved, to finish this project sooner by working in parallel instead of serially.

There have been too many projects in Durham which have never happened because bureaucracy and "overwhelming project paralysis" delayed putting them out to bid before inflation completely ate away the budgeted funds.

City management and staff don't seem to get this.

Wake County management and staff DID get this on the other end of the American Tobacco Trail when they finished the last mile of their section of trail to the Chatham County line before Chatham/Cary completed their portion.

They realized that they had the funds now to complete it, but inflation would rapidly eat into those funds. So when it became apparent that the Chatham County portion would be several years before completion, they spent what they had and built the trail to the county line. It is enjoyed by thousands each month.

I had a lot more ranting, but lost it all...

PLEASE come to the meeting to view and give your thoughts and input to the designs presented. By your presence, you demonstrate to city management, staff and elected officials, as well as other staff, the importance of completion of this long delayed project - in the works since 1992 - is to you.

Please urge our elected officials to instruct city and contractor staff and management to move more quickly - lets get this out to bid by the end of 2008 - so that inflation doesn't chew up all of the hard won funds.

I wonder how much would be saved by eliminating the "signature" elements from the bridge. Would it be enough to build a bridge over (or culvert under) NC54 / Renaissance Parkway? I'm kind of bitter that Durham didn't require the Southpoint developer to include a culvert under Renaissance when the master plan was approved. Those are 2 of the 3 busiest streets that the ATT must presently cross at grade.

Orulz: I'd agree with you about the signature bridge if it saved significant dollars or got the project done sooner. Worth noting though that in his Nov. presentation, Steven Glover pointed out that there's a natural rise on both sides of I-40, allowing for a straightforward crossing that wouldn't require expensive approach ramps to handle grade changes.

He also pointed out "signature" designs his firm and others had done in other communities where, by taking advantage of such geographical features, a bridge both made an artistic statement and was no more costly (or cheaper than) an off-the-shelf design.

Of course, if it comes down to a great additional expense for a signature bridge... I'd say, let's go with what can get done soon and on budget. Just IMHO.