From the rumor mill: After two of Durham's major black-owned financial institutions, Mutual Community Savings Bank and Mechanics & Farmers, agreed to merge last year after SEC concerns over the financial health of the former, it was to be expected that some consolidation of facilities was likely.

Both M&F and Mutual own significant buildings downtown: M&F is housed in a grand building on Parrish St. that was formerly the headquarters for the NC Mutual life insurance company, while Mutual owns a low-rise tower on E. Chapel Hill St., seen at left. 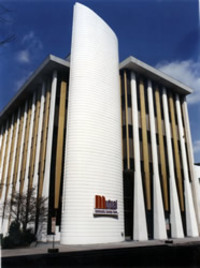 Not surprisingly, the bank appears to have settled on using the more historic structure on Parrish St. -- a fitting location, given the street's importance to the history of the African-American middle class and 20th century business success in Durham, and given the major renovations underway to M&F's architecturally-significant home.

The word floating through Durham's development circles is that the Mutual building, on the other hand, is on the sale block. And given that no one we've talked to is willing to go into too much in the way of specifics on the matter, our guess is that a sale is imminent.

The usual suspects of downtown investment players are floating around as possible purchasers, but it's not clear who is likely to end up with the building. Still, I wouldn't be surprised if an announcement about the building's sale is on the horizon,

Oh man, I hope this beautiful building is spared the wrecking ball.

Agreed, the Mutual building is oh-so-groovy.

Oh that we could re-create the Center Theatre back on this site.... It was an Art Deco confection!

@shawnmichle: Try again, Forrest. Stupid is as stupid does.