It's official: Duke to move 300 employees to the Durham Centre

Jack Hagel's N&O piece puts confirmation to the rumor we reported here back in December: a tenant has, indeed, leased up most of the remaining space in the Durham Centre in downtown Durham. And, as a commenter here at BCR suggested, the new tenant is in fact the Duke Clinical Research Institute (DCRI).

Duke is leasing 72,000 sq. ft. in the Durham Centre, which absorbs almost all of the 80,000 sq. ft. of vacant space in the building. This deal is especially good news for neighboring businesses, which will have the chance to absorb lunchtime food and retail traffic.

No word on lease terms or a timeline for the DCRI relocation.

The new, new water math: Why it (mostly) makes sense

Though I'm often one to criticize our local officials for head-scratcher decisions and bonehead ideas, I'm a bit surprised to see the recent dust-up over the change in how Durham's calculating days remaining of water supply.

Barry kicked this off over at his place yesterday with a piece on the "missing MGD" -- that is, the gap between the 17.75 million gallons/day of water that Durham was using to calculate the days of water remaining, and the fact that the actual water demand was 20.94 MGD.

Durham doesn't factor in the full daily demand to calculate how much water it has left in its three main reservoirs. If it did, it would have about 106 days of water in its main supplies, about three weeks less than the 125 it's touting now.

The city's average daily demand for January is 20.95 million gallons. But to calculate the days left, only 17.74 million gallons is divided into the total water available in Lake Michie, Little River and Teer Quarry reservoirs.

There's two issues here. Is the calculation sound? And, was this communicated as well as it could be?

To the first point, I think there's absolutely no question that subtracting the OWASA/Cary inflow from Durham's actual water use to get the 17.75 MGD number is the right way to go.

No bond -- this time

Durhamites breathed a sigh of putative relief last night with the announcement that a suspect was in custody for a number of armed robberies, including the murder of Duke graduate student Abhijit Mahato last Friday.

Of course, any such discussion of suspects in the criminal justice system must include the reminder that individuals are presumed innocent until proven guilty. Still, if the D.P.D. got the right individual, this apprehension is a sobering reminder of the challenges Durham faces in solving the Courthouse's "revolving door" problem.

The suspect, Stephen Oates, has been charged with a staggering seventeen robberies -- three of which happened on the day of Mahato's murder last Friday, as the N&O notes.

That is to say, Oates is accused of committing almost one out of every four robberies that have occurred in Durham since January 1.

The N&O reports that the suspect has a bond of $1 million on the robbery charges and was denied bond for the murder charge, so this person won't be free on the streets ahead of trial.

The kicker here? At the time of the alleged crimes, Oates was out on bail for -- wait for it -- armed robbery charges stemming from a purported stick-up in West Durham back in November.

Continue reading "No bond -- this time" »

The City/County Planning Department is holding an open house this evening to receive input on the draft version of the Ninth Street Plan. As we've talked about here before, this proposed plan would create a form-based building code that would govern development in the corridor stretching from Green St. to Sam's Blue Light in a manner designed to enforce design-based rules to try to preserve the character and look-and-feel of the Ninth Street district.

Though increasingly popular, form-based codes have their skeptics, too, in that they often replace traditional zoning rules -- which tries to pattern which uses (retail, commercial, industrial, etc.) can occur in particular areas -- with precepts that just govern buildings' envelopes, size, form and placement.

The Ninth Street area, like so many parts of revitalizing Durham, is always a magnet for developer activity -- and the Watts-Hillandale and Old West Durham neighborhoods, which has long been active in land use planning (with court battles still legendary in the Bull City), remain wary about development plans set for Ninth Street North at the corner of Ninth and Green. At the same time, the plan is now moving forward after Frank Duke's departure as chief of the planning department.

All of which means: Expect some continued debate and discussion about this one before the plan moves forward. Tonight's open house is scheduled for 5:00pm to 8:00pm at Asbury United Methodist Church (806 Clarendon St.); the meeting is a drop-in format, not a three-hour marathon. 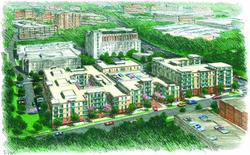 A follow-up to last week's mention of Crosland's plan to replace Bristol Court and some restaurants on Erwin Road near Duke with a brand-new apartment complex/mixed-use development: Triangle Business Journal this week has an excellent story about the proposal, including the imagery from the developer shown at right.

According to the TBJ:

The TBJ article also mentions other development planned for the area, including a hotel proposed for Erwin Terrace and a hotel/office/condo project on the remaining Pavilion at Lakeview site.

Incidentally, if you haven't done so, be sure to check out the comments on the earlier story on this project. Regular commentors KH and David raise some very interesting points about the changing demographics of the area and the impact of same.

As we noted here yesterday, the Board of Adjustment voted unanimously to approve a minor special use permit and buffer variance for Deanna and Colin Crossman's plan to renovate the King's Daughters Home and transform it into a B&B.

For most readers, that's about all you need to know. But some of you may want the blow-by-blow of what happened in yesterday's meeting. For you, dear readers, more detailed notes on yesterday's session ensue after the jump cut below. Warning: Not for the faint of heart or the only-mildly interested.

There were about, by a generous accounting, perhaps 10-12 residents for every pro journalist in the City Council chambers for tonight's State of the City address by Mayor Bell. (Then again, when you've got all the major media turning out for an event, why show up?) Still, those present got a useful lens into what the Mayor has in mind for the coming year in local politics and governance.

Bell kicked off his seventh-annual address by noting a list of accomplishments in this past year: the success of public-private partnerships like the topping-off of the Durham Performing Arts Center, the completion of the downtown streetscape and the ensuing Durham Rising celebration; and the groundbreaking for the Durham Transportation Center. Bell also noted the agreement with NCDOT and West Village to move the city's Amtrak station to its new home.

The mayor also singled out the $150 million West Village Phase II renovations, coupled with a $4 million streetscape investment. At the same time, Bell praised the approval of the funding for the DAP renovations and the arrival of Minor League Baseball, along with the ongoing work at American Tobacco.

But, as Bell noted at the end of the address, as tempting as it would be to talk about only the signs of Durham's "upswing,"  "that's not Durham, and that's not me." Durham faces challenges, the mayor noted, but the city can overcome them. Bell focused on three topics of attention for the City this year: crime and public safety, the drought, and inner-city revitalization.

Crime and Public Safety: Though he addressed this topic last, this marked perhaps the most newsworthy part of Bell's address. The mayor made a clearer, more strident call for reductions in crime than one has recently heard from hizzoner, including notably a number of admonitions towards Durham's judicial system -- an element that, strictly speaking, falls outside the city's jurisdiction.

A quick Dunkin' update: The new Durham outlet planned for the Pavilion at Lakeview on Erwin Rd. is now scheduled to open on March 15. Construction reportedly began this week at the west Durham site.

One can only imagine what the drive-through line will look like at peak hours, what with queues of 20-30 minutes reported some days for lunch at Chipotle, and with more eateries still to come in the complex.

Hat tip to the always-responsive and well-sourced Sue Stock over at the N&O who responded lightning-quick to reader inquiries from the weekend (and who provided this update over at her blog.)

The Board of Adjustment voted unanimously this morning to approve the minor special use permit and variance required for Deanna and Colin Crossman to operate a bed and breakfast at the King's Daughters Home.

The vote came after over two hours' of testimony and argument from two groups of adjacent neighbors and other stakeholders: one group in favor of the proposal without restrictions, and a second, significantly smaller group of neighbors supportive of the B&B but concerned about the impact of events allowed as an accessory group. This latter group called for restrictions on noise, parking, alcohol use, and event size.

The Crossmans agreed to add a single condition to their application -- a maximum headcount of 100 people in the facility at any time -- which was sufficient to meet any concerns on the part of the members of the BOA.

The project will go before the DRB one final time on its consent agenda, which means that the project has passed all the political hurdles to moving forward at this time.

We'll have a much more detailed transcript of today's meeting posted at BCR tonight. (Again, as in all things related to Trinity Park, I must add the disclaimer that I speak only for myself on this subject.)

Mayor Bell will present his annual "State of the City" address tonight at 7 p.m. in the City Council chambers downtown in advance of this week's scheduled Council meeting. According to Matt Dees' reporting in the N&O, Bell is likely to make the issue of the drought the cornerstone of this year's address, noting that the mayor "will probably call for increased spending of improving water lines and finding new sources of water."

Of course, given that any such discussion is taking place right on the heels of a City Council retreat that the Herald-Sun (link unavailable) and N&O pointed out was a sobering discussion on the city's budget -- and, particularly, its capital projects ambitions -- watch tonight's speech not simply for what grand goals our civic leaders wants to put forth on the agenda, but for how we're going to fund them, and what we might choose not to fund. (We'll talk more

Look for the price of water to be a very touchy subject over the coming months. The Duke drought forum earlier this month noted that 90% of North Carolina cities charge more for potable water than does the Bull City. On the one hand, then, raising water rates to encourage conservation and to service revenue bonds that could pay for improving the infrastructure is likely to be a natural solution to some.

But this issue has the potential to be a "third rail" concern for some constituencies in Durham, who'll argue about the impact of increased water rates on low-income households. I wouldn't be surprised to see some real divisions open up on this topic.

On a more sobering note, one expects we'll see some mention of crime and safety after the horrendous pattern of crime to start this year -- including as many as 30 black-on-Latino armed robberies, the murder of a Duke grad student and a Latino on Friday, the robbery of four other Duke affiliates in the course of a week, and the report of three folks being shot in a single incident overnight last night.