Holiday lights, parade to sweep through downtown Durham this weekend

Is the holiday season getting you more bah-humbug than happy? Or are you the kind of person who loves the bright lights and evergreens and waits for it all year round? Either way, this weekend marks the time pageantry comes to downtown Durham with a wide range of events to officially kick of the holidays in the Bull City.

First up: Friday night's ceremonial lighting of the Lucky Strike water tower at American Tobacco. The white light bulbs going up the tower have been replaced with more seasonal colors to add a bit of flair to the centerpiece of the complex. Creekside Elementary, Carrington Middle, and Northern High students will provide some holiday entertainment, while WRAL's Ken Smith will stop by to host the evening's events. (What, we don't rate David Crabtree or Pam Saulsby this year?) The first five hundred folks in attendance, we're told, get a "souvenir light wand," too. Things kick off at 7pm tonight.

Then, from 9am to 1pm, Light Up Durham is sponsoring Talent All Over Town, a musical showcase of performances from DPS students in four venues (the ATC, the Carolina Theatre, 108 Morris St., and the Hayti Heritage Center.) There will be three blocks of performances in each space; check out the Light Up Durham web site for more details. 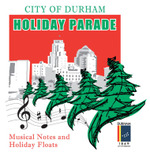 Finally, the highlight for many of the weekend festivities: the city's annual holiday parade, culminating in the first-ever "holiday tree lighting ceremony" on the CCB Plaza, with Bill Bell and Santa Claus present to bring the fun to a close. The parade this year starts later than before -- at 4 p.m., at the corner of Blackwell and Jackie Robinson Sts. by the DBAP.

The parade route will wend up Blackwell/Corcoran/Foster to E. Chapel Hill St., then will head past Rue Cler and the wreck-a-deck up to Mangum St. The parade then heads up Mangum St. to Morgan, down to Foster, and ending at Foster & Geer. Charlie Nelms, NCCU's new chancellor, will serve as the grand marshall for this year's event.

At parade's end, we'll have the aforementioned tree lighting at the CCB Plaza at 6:30. Durham Parks & Rec and the day's sponsors are also planning musical entertainment in the hours before the parade in both the CCB Plaza and the pavilion at Durham Central Park. Find out more details at the City's web site.

Hope to see you out for the fun downtown over the next couple of days.

Psst - I think your Light Up Durham link is broken. ;)

Students from Brogden Middle School will be performing as well.

Broden - you mean Brogden will be performing tonight at the tower lighting?

Yes. I don't know if the whole Brogden group will be there, but at least some students are scheduled to be apart of the program tonight.

Do all cities now charge for participating in their parades?

I'm very much looking forward to the parade. I love hearing the scene of the crime rovers and in general I think parades are fun. I think I'll walk the dog early tonight so I can get over to the parade and stay for the tree lighting. Thanks for the article!
-sv