Bull City Rising
About Archives @bullcity
Stith and immigration redux -- and the Committee endorses who?
Downtown Durham, from the top of the Hill

To me, few things really capture the change that's underway downtown as well as this picture: 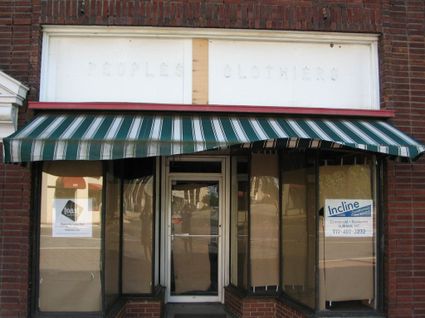 Just visible at the top: the shadow left behind by the old lettering for Peoples' Clothiers, a downtown retailer that had a rather eclectic mix of clothing, and which was one of a number of very small and local businesses along the Five Points strip, which has had some of the more active downtown retail in the district. I don't know why Peoples' Clothiers closed -- if it was a non-renewed lease, or the business not doing well, or a relocation.

Nonetheless, the site now is being renovated to make way for a new business -- Toast Paninoteca, described on its web site as an "authentic Italian sandwich shop" serving breakfast, lunch, and "late afternoon snacks." Toast will also feature North Carolina beers and wine by the glass and bottle. The web site anticipates being open 7am-7pm Mondays through Fridays, 11am until 7pm om Saturdays. (See their new web site for more details.)

It's great to see more dining options downtown, as well as new opportunities for small businesses to open up in downtown retail spaces. (Toast is actually funded by a business start-up loan from Self-Help, with City participation in same under the city's small business support programs voted on at last night's Council meeting.) At the same time, one of the challenges in downtown's redevelopment lies in ensuring that the change doesn't manage to crowd out entirely the Peoples' Clothiers of the world.

One of the positive trends in downtown redevelopment has been the availability of smaller-sized retail and storefront spaces (the renovation of 1000 W. Main comes to mind) and the opening of small businesses in non-traditional properties (305 South is a good example.) And for all that I have cast aspersions on Northgate's business model, they deserve credit for being open to leasing space to businesses that, like them, are locally owned examples of entrepreneurship.

Maintaining diversity in downtown's storefronts is going to be a more and more critical item as time goes on. If we can manage this, it will speak to the energy and spirit of a Durham that remembers that creating more opportunities for enterprise throughout the socioeconomic strata is a valuable thing in a world of strip-malls and REIT-owned shopping centers.

I talked to the proprietor of People's Clothiers a week or so before they closed, and she said they would be relocating, though, at that point, she didn't know exactly where. So I sort of assumed it was a lease issue.

Wow, I was just saying to myself the other day, "Self, what Durham really needs is a good paninoteca."

Actually, I just now had to go google "paninoteca." Turns out it's the hip, latest thing. So yay Durham. Now all we need is a good cupcake shop.

Or wait--here's a radical idea: how about a breakfast place downtown that's open *before* 10 am on weekends? Anyone?

holy cow, maybe now i can afford to eat in a new restaurant in durham. i'm tired of the overpriced and mediocre quality of the new restaurants here in town (i'm looking at you alivias and piedmont, haven't been to blu or rue cler yet, but maybe when my tax return comes in, i can afford it). durham (particulaly downtown) has way too many over-priced food options compared to affordable options. i don't want to eat mexican, satty's all the time. where is the mid-range (only the Fed?). is it too much to be able to get a good quality meal for $7-$10?

ok, didn't want to totally harsh on the expensive restaurants. I've had a delicious lunch at piedmont (and a bad one) i keep going back hoping that i'll really love it (despite the high price) also i like the look of alivias lunch and latenight menu, but why so many rules about when i can eat something affordable?